Awesome gun with many features at a entry levrl price point!
•••
Upvote 0

This does look like a game changer. I have ordered one in .22 from P/A and should get it in two weeks or so. My order was based mostly on how excited Steve sounded in his review videos.

I have seen many reviews that indicate there have been many Avengers that were received leaking air and or not holding air and one when the guy aired it up, it was all shooting our his barrel. Anyway, got me to thinking how many returns vs satisfactory Avengers have there been todate. Like a percentage of good vs bad Avengers purchased thus far. Anyone have any thoughts on this?

Would this rifle work as a entry level Field and Target gun.
•••
Upvote 0

I purchased one in .177 and it is a tiger, accurate as good as I have seen and I own several guns in .177. The difference with the Avenger is the ability to adjust the velocity from slow to way too fast depending on the pellet. Zero at 40 meters / one ragged hole. I chose .177 because it is the only PCP I own in that caliber , all others are springers. Shooting from a blind a springer can be a PITA (pain in the ass). Head shots on squirrels is easy ; forgot, the trigger is better than any other gun I own. Even better than the Benjamin Caden in .22 ; have had no need to adjust it as it came to me that way out of the box.
•••
Upvote 0
D

Seems like a very nice specimen particularly for the price.
•••
Upvote 0

The new wood stock Avenger coming in May as advertised by PA .22cal and .25cal 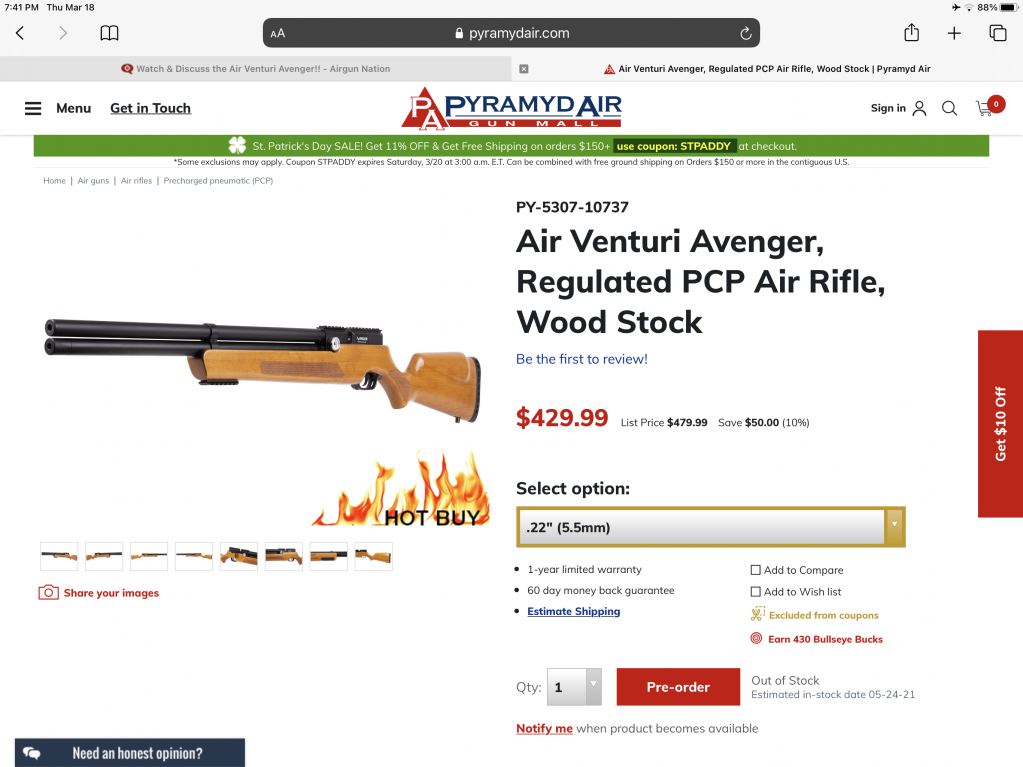 Where can I purchased just the stock ? Looks good but how does it affect the overall weight if the gun and would it be of any real benefit ?
•••
Upvote 0
J

I put a Donny FL adapter on it although I never had signs of clipping. I have not put a suppressor on it yet but I probably will. I messed around and made one out of an old sprinkler today but It is noticably not in line with the barrel so I only dry fired through it. It does surpress the noise.

My trigger is definitely not the best of the guns I own. My only other PCP is a Prod and it's trigger is much better straight out of the box. I have maxed out the weight, travel, and sear engagement screws and my trigger is still a little heavier than I'd like but the bigger deal is the creep. It is significant. But I've adjusted and still get some good groups, at least for me. I will probably try polishing the sear engagement surfaces. I've had success with that on powder burners (and I know it can cause an accidental discharge if I am not careful).

I've been pleasantly surprised with the ease of changing the velocity and the consistenty good accuracy. Mine does not need more hammer pressure for velocity - even at a regulator setting of 2400, but I tried a bit more to determine that and did see a slight, maybe 3fps, increase from 1 turn. I did turn and a half anyway and velocity didn't really go up further but group size went down noticably. It was shooting 3/8 to 1/2 inch groups and went down to 1/4 inch or so with the pellets it likes best, occasionally with King 25.39.

I'm thinking of putting a suppressor on my .22 Avenger, probably a Donnie FL. Which models do you use and are you happy with it?

I have an Avenger is .25 caliber and purchased the DonnyFL Tanto model. It reduces the shot noise substantially, You will also need an adapterthat can be purchased from Pyramid Air to attached it to the rifle.
•••
Upvote 0

The new wood stock Avenger coming in May as advertised by PA .22cal and .25cal

Where can I purchased just the stock ? Looks good but how does it affect the overall weight if the gun and would it be of any real benefit ?
Click to expand...

The stock will add weight, perhaps a pound?. Unless you are backpacking up mountains with the gun, the added weight will be a benefit.
•••
Upvote 0
N

got my wood stock avengers yesterday, love them they have also done some upgrades to the gun as well, is 1.3 pounds heavier but love the look and feel of the new wood stock
•••
Upvote 0

got my wood stock avengers yesterday, love them they have also done some upgrades to the gun as well, is 1.3 pounds heavier but love the look and feel of the new wood stock
Click to expand...

Mine came several days ago.
•••
Upvote 0

If the wood stock is going to ad that much weight I will pass on the wood. With a Sightmark photon RT and a DonnyFL supressor it's heavy enough. Did I mention a bi-pod and IR aluminator as well. I use a BOG tri-pod to hold it all up. Ill stick with the plastic , thank you.
•••
Upvote 0

ENTER TO WIN an Air Venturi Avenger Bullpup and More!!!

The Winner of the Air Venturi PCP Package is...