Trouble with the Sled on Edgun Matador R5M

Hi guys, perhaps someone can help me out. I was putting a Huma Regulator in my R5M and when I finished with the regulator I was putting the air tube back in the receiver and all of a sudden the sled or the wedge (the little do hickey that holds the air tube in place) fell out of the receiver. I had never had that happen before and was kind of at a loss because I couldn't figure out exactly which way to place it. It looks like the long sharp end of the sled goes to the bottom and fits up underneath the rear of the air tube where the bleed valve for the air tube is at (not the transfer port side).

Is that sled supposed to fall out like that, doesn't it have something to hold it in place … or is it just pressurized by the screw against the side of the receiver … kinda like a friction fit with the friction being supplied by the pressure of the screw tightening.

Any help yall can give will be greatly appreciated.

When you loosen the bolt that holds the sled to the air tube, you're supposed to loosen it more until tightens up inside the receiver. Mine also fell out once and I kind of freaked out a little bit but figured out which way it went in and realized how the sled worked. I wish that I had a picture to show you but I'm away from R5M right now.
Reactions: likkitysplyt
•••
Upvote 0

I believe Brian has the schematics on his web site if you haven't figured it out yet.

Forgot to mention; When you loosen the bolt, slide the bolt down with the hex key and loosen it some more until tightens inside the receiver. 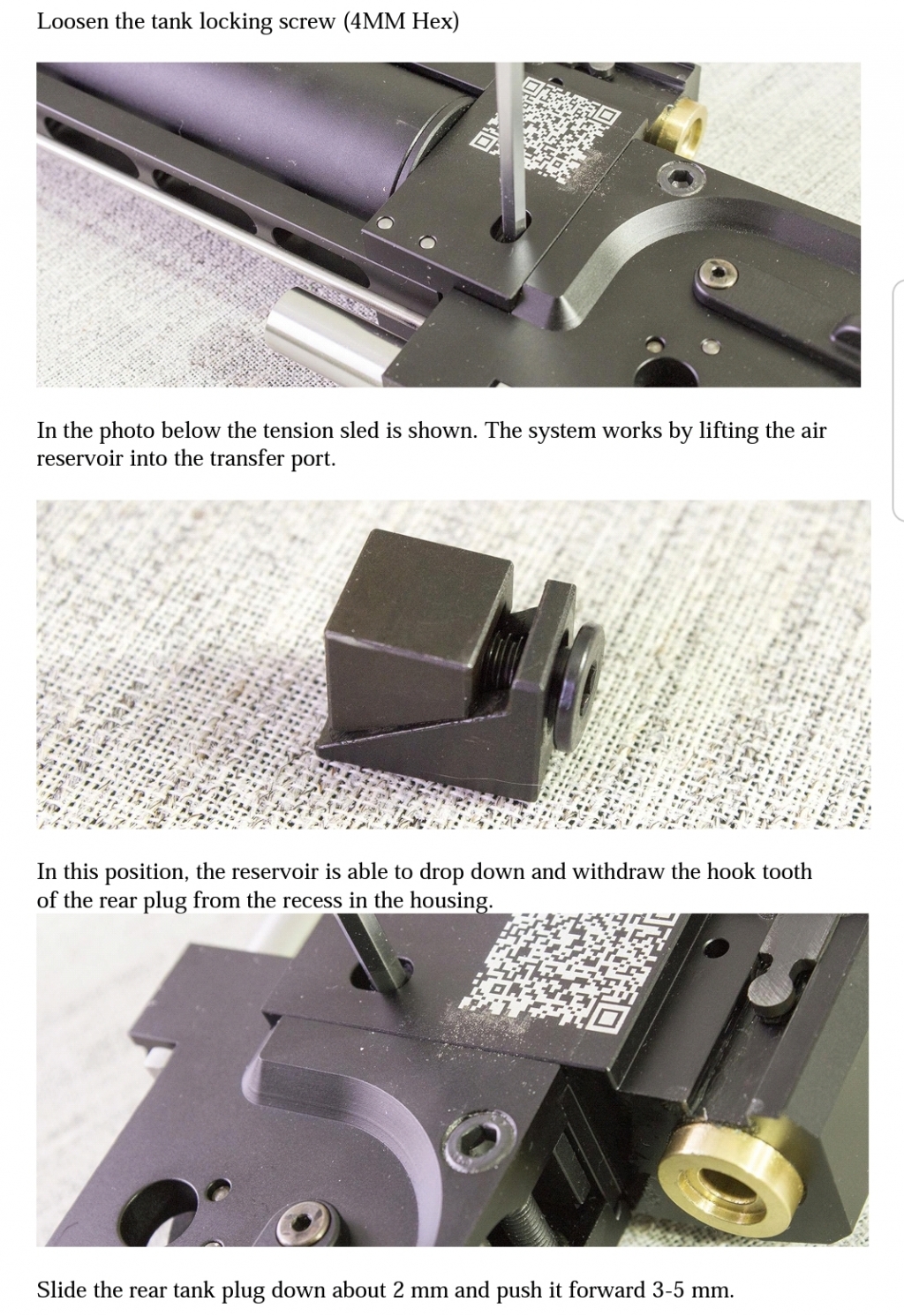 That piece pushes the air tube up in the transfer port and holds it in place. It is a unique set up.

The flat piece faces up towards the tube. When you tighten the pieces it should push the tube up so tight that everything locks into place just take your time.

First learn how to slide the tube in without the piece, so you get a feel for it. Then try it with the piece in there. The sled cant not be too tight or too loose or it does not fit in the slot.

All edgun owners were in your same spot (freaking out over it), but it is simple once you understand it.
Reactions: likkitysplyt
•••
Upvote 0

And make sure everything is in alignment before you go tightening anything down. That’s a great system but look up the specific torque requirements before you start if not sure.

Like transmission alignment rod tools, or when putting new gasket on pan. This is more precise as HPA will obviously leak if you had to use the fishing line tie trick while evenly getting each bolt set flush but not torqued. Cut & remove line once alignment occurs before you tighten or all for nothing. Same here. Easy once you get it done once.
•••
Upvote 0

And make sure everything is in alignment before you go tightening anything down. That’s a great system but look up the specific torque requirements before you start if not sure.

Like transmission alignment rod tools, or when putting new gasket on pan. This is more precise as HPA will obviously leak if you had to use the fishing line tie trick while evenly getting each bolt set flush but not torqued. Cut & remove line once alignment occurs before you tighten or all for nothing. Same here. Easy once you get it done once.
Click to expand...

Unfortunately, Ed does not provide any torque specs for this or any other parts.

To the OP: you want to get that one nice a tight. Make sure the tube is all the way back and snug that sled bolt hard. Not so hard that you'll break something (and not even with a 1/4" torque wrench), but a good hand torque with a 4mm T-handle. Keep a little pressure on the tube as you start to snug it.
Reactions: likkitysplyt
•••
Upvote 0

Unfortunately, Ed does not provide any torque specs for this or any other parts.

One probably could find out from brian at ed gunwest .HE told me yesterday the tension barrel torque for the R5M is 12 ft. pds. Darell
Click to expand...

You guys are great. Got it working right this morning and everything is fine. I have had the tube out several times before but the sled had never fell out … silly me … I thought the sled was attached to the frame some way where it would not fall out and then I raised the rear of the gun and the sled popped out on the floor to my amazement. Up until then I was boldly going forward simply because I couldn't find reverse … didn't know which side was up on the sled, then I started to get confused so I came to AGN because asking dumb questions is easier than correcting dumb mistakes. I learned a long time ago that assumption is the mother of all foul-ups … as they say in Beirut, Shiite happens. I just wanted to thank each of you guys for the help, I probably didn't parse my words very well when asking the question … but as long as the answer is right, who cares if the question is wrong … RIGHT???

He who asks a dumb question is fool for a day but he who doesn't is fool for a lifetime.... I think that was some old Chinese fella said that.
Reactions: mtnGhost
•••
Upvote 0

I think you are right Sonny, in fact I know you are right! I know this because I am a well adjusted person who can easily make the same mistake twice without feeling nervous. In my case, a little ignorance goes a long, long way!

John
•••
Upvote 0
You must log in or register to reply here.