The Alpha Wolf Joins the Pack! 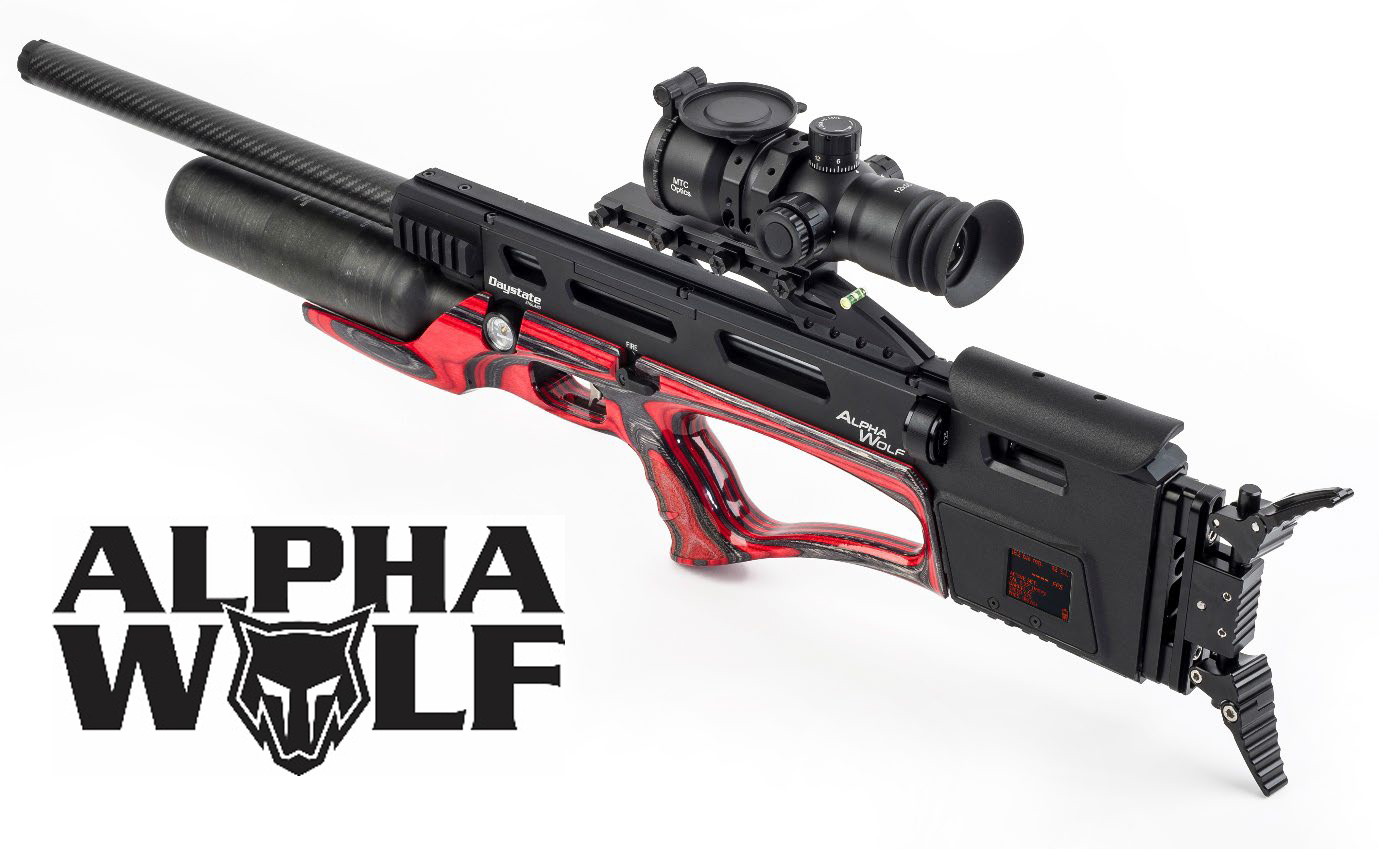 Alpha Wolf is the second ‘future-proof’ PCP that Daystate has developed, and its launch places it alongside the highly acclaimed Delta Wolf in their current line-up of world-leading, user-programmable electronic air rifles.


The British company’s investment into computerized airguns means its rolling development program can easily incorporate today’s latest performance improvements as well as tomorrow’s – and the Alpha Wolf takes things a step further by offering all this in a stylish, new sporter package. In short, the world’s most advanced air rifle is still the most advanced air rifle… and it’s now available in two formats!


While still complementing its Delta Wolf bullpup sibling, Alpha Wolf’s individuality is immediately obvious courtesy of a beautifully sculpted, red laminate skeleton stock with extended forend and new-look Picatinny optic rail – still movable fore-and-aft to cater for any day and NV scope configuration – that is fitted with an anti-cant bubble.

With SO many people buying more of a vertical (read that...comfortable) aftermarket grip...WHY Daystate, is the (non-fixable) grip rotated back so far ?

That's a lot of $$$$. But not if you compare it to a fully loaded Impact with similar features.

I don't own an impact but my friend does. He spent long hours and hundreds of pellets tuning for 1 specific pellet. Once he got it he said he'll never change the pellet or weight again because it's such a PITA. So in that regard I think Daystate has them beat because the computer allows the user to repeatably change between pellet or slug and different weights.

JMHO because I can't afford either of them!
•••
Upvote 0

Sweet lead dispenser for sure, but it would take well over a year for me to save up for something like that, and thats assuming nothing else die on me like my GFX card just did, and that will be a 5 - 700 USD to fix that.

Ill very much like to play with one for a half hour / full hour.
•••
Upvote 0

Many Delta wolf owners had issues with their 3400 air rifles. Maybe this 4000 alpha wolf will have these issues resolved. My thought is not to be the first group of owners in a new model...and see how it performs in the real world. But for 4000 it should perform flawless, just what you would expect for a air rifle of its claims and price...we will see.
•••
Upvote 0

Well, in all fairness, the new Alpha Wolf is $3,600. The Delta Wolf is $3,400, and the initial batch over a year ago were $3,000. I had one of the first ones (.25 cal.) and it did have growing pains, but AoA/Daystate made it right by a redesign of the chrony circuit board holder/air stripper (was hard plastic, now aluminum) and updating (via flash BIOS) the Gun Control Unit (GCU), plus other minor upgrades. When my gun was at AoA, they also replaced the cocking arm bushings since I had beat the poop out of mine practicing last year for the Speed event at RMAC. The brass bushings were both split (but the cocking still functioned perfectly), and they were replaced with stainless steel.

The .25 barrels have been very good right from the start (A.R.T. LW barrel) and my gun is good enough now that I have the confidence necessary to shoot it at RMAC next month. If I didn't think I could win with White Fang at 100Y BR, I wouldn't be shooting it and instead shoot my .22 Red Wolf HP (Bleu). Mechanically and electrically, the Alpha Wolf and Delta Wolf are identical. The Alpha has an upgraded scope rail and nice red laminate stock. That's it. Daystate will also be offering an upgrade kit to transform your Delta Wolf into an Alpha Wolf, and its half price for those that already own a Delta Wolf. FYI, I'm going to keep my Delta just like it is, I like the Ergo vertical grip too much to change.

FYI for those interested, I bought a custom adaptor for my .25 Delta Wolf that allowed use of a 600mm FX STX barrel system. I used a 15mm OD, 14mm ID brass tube for shimming to proper diameter to fit snugly in breech of DW. I've tried the Superior, Superior Heavy, and Slug A liners at commonly accepted speeds with .25 Heavy pellets. None of the STX liners were more accurate than the stock LW A.R.T barrel that comes with the Delta Wolf, plus I had to forego use of the chrono to use them. Additionally, the STX liner system was significantly more "floppy" than the solid LW barrel and needed more testing to get harmonics just right.
•••
Upvote 0

It will be nice to hear how it performs by those who buy one. I never warmed up to the look of the Delta wolf..but I do like the look of the Alpha wolf.
Click to expand...

I think that’s exactly why the alpha wolf exists. All of the technology of the Delta Wolf in a more traditional stock.
•••
Upvote 0

Since launch they added a 20 MOA scope rail, the toolless regulator adjustment, extended length cocking handle, 1/2 UNF thread on the barrel shroud. There might be more unpublished changes but those are the ones I'm aware of.
•••
Upvote 0

I thought it was the silliest thing I ever saw. I kind of like it now.
•••
Upvote 0

Is this any different besides cosmetics then the delta wolf?
•••
Upvote 0

What daystate failed to tell all of us mugs that bought the DeltaWolf in the uk under the 12lb law was 90% of the software is disabled and what’s really annoying is that if you buy a barrel kit in a different caliber the guns on board system does not know and you the shooter can not do bugger all about it. What’s worse is when you change calibers back it scrambles the electric brain I massively regret buying one.
•••
Upvote 0
C

The .30 DW I had was the worst airgun I ever owned, and while you can work on a mechanical gun like the FX Impact, try fixing defective software.
•••
Upvote 0
R

The first few iterations of the Delta did indeed have unforeseen issues. Software and Hardware have been in a constant state of upgrading and improving. The Latest versions of the rifle are vastly improved and solid. I cannot speak for the UK market as the 12 ft lb law does not apply to our market however I know that has also been addressed. The Delta and Alpha rifles USA imported are something to behold in the Industry. Nothing comes close to the flexibility and technology. The most exciting for me is that all rifles can be updated and upgraded to the latest specifications. No one gets hurt.

Will have to agree with @centercut & @RB-AOA the rifle I have today is heads & shoulders above what I got originally
•••
Upvote 0
You must log in or register to reply here.

So whats the word on the Daystate Delta Wolf