Fuss, I’m pretty sure you and the Boss would do just fine in the EBR winds.
FYI, here’s my best group in actual competition, in the wind at the Saguaro Classic just south of Tucson Apr 28, 2019. We shot ten of these targets, five shots each, 100 yards. Wind was 10 to 12 mph fairly steady. Just inside of an inch 5 shot group. Didn’t measure it… Targets were EBR-ish size. 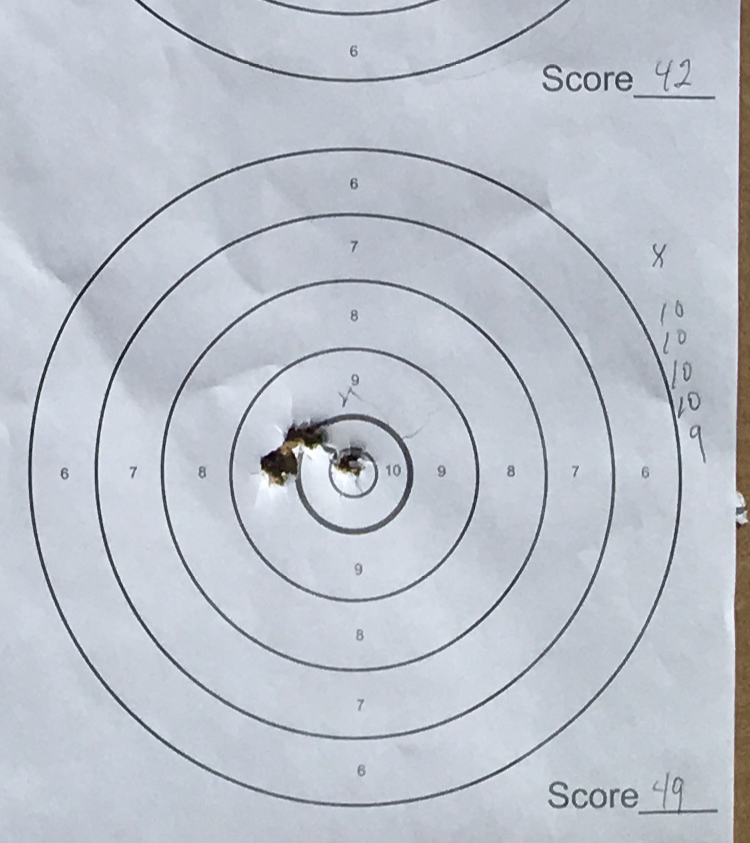 Fuss, I’m pretty sure you and the Boss would do just fine in the EBR winds. FYI, here’s my best group in competition, in the wind at the Saguaro Classic just south of Tucson Apr 28, 2019. We shot ten of these targets, five shots each. Wind was 10 to 12 mph fairly steady. Just inside of an inch 5 shot group. Didn’t measure it… Targets were EBR size.

That's awesome Mike. I would need lots and lots of practice in the wind before I could do that. Especially in 10-12 mph winds
•••
Upvote 0

Did you Zero at 100 yards and maintain the same POA for all seven targets? I normally just shoot for groups vs. going for score, so I’m trying to understand the methodology you employ for ”score” shooting. Let me explain. and for this scenario let’s assume NO wind. I know that’s not realistic for outdoors but humor me here so I can improve my understanding.

When I shoot at 50 yards, I zero my gun for 50 yards and then shoot a bunch of five shot groups for each of my small circle targets. My POA is normally always the center of the bull. Since I’m shooting for groups, I’m not adjusting for each shot.

Can you describe in some detail the approach you take for 100 yard score shooting, given my example above? I’m assuming that each successive shot is used to make slight POA adjustments when shooting for score. Assuming no wind, what is your POA for each 5 shot target group?

BTW - Mike and others please chime in also with your style too.

As an aside, I’m a big fan of PCARMY’s suggestion to create a long range sub forum, and questions like this would be a good place for those discussions possibly.

Thanks Rob, Thanks Saxon

Lets see if I can answer a few questions. First and foremost, I only try my luck when there's little to no wind. That's key for me. I couldn't make a pimple on PCARMY's butt! LOL. The guy is phenomenal. I guess my 100 yd shooting is short range for him.

I do zero at 100 yds. I set up two targets at a time and my first target is my sighter. Just six huge 1.5" circles on paper. Then when I feel I've got a decent group zeroed in I move to the first NUAH target. The key is to try and get as many shots in the x ring so yes my POA is usually dead center of that. If my score looks bad on that first NUAH target I go back to the sighter target and make adjustments.

For instance one morning I shot this target on the very first attempt after sighting in on the sighter target. First shot was dead in the bulls eye. Second shot was high, then three more shots in the bullseye. It scored a 50/50 with 4x's and measured 0.925 ctc. To me that was my best target ever even if it was a 0.925 ctc because I had 4 x's. 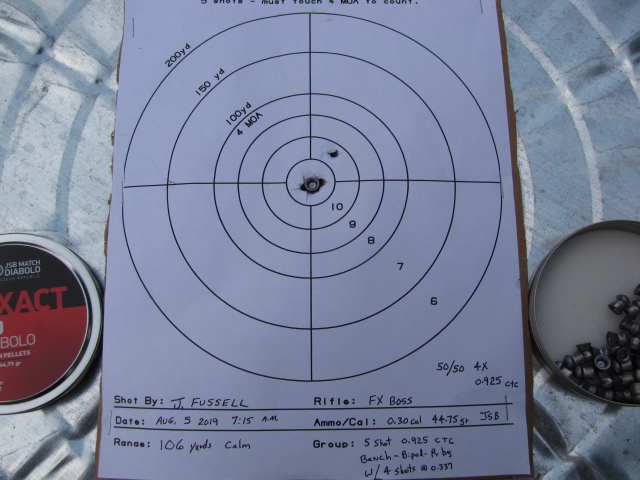 That particular morning on my second target, the group was even tighter at 0.67" , but only had three x's 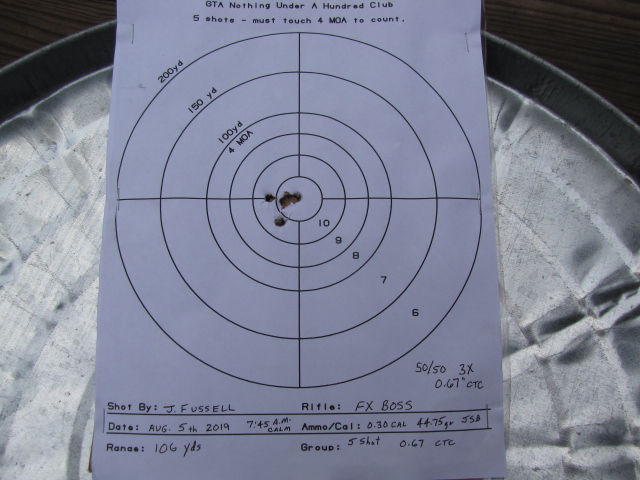 If my group seems to be moving to the left as in this photo, sometimes I will aim a pellets width to the right but not much, because if the pellet does go where you aimed you're screwed? So yes I am moving poa just a fraction inside that x ring from time to time. So I guess I'm more concentrated on trying to get that ever elusive 5 x's than actually shooting for group size.

For instance, I can't remember what day or target it was, but I was aiming at 2:00 oclock on the 10 ring line to get my shots to fall in the x ring. It wasn't worth the time it would have taken to go back and forth with sighters to get it perfectly centered if you know what I mean?

We've been getting some new NUAH shooters over at GTA and I really enjoy the enthusiasm. I love both of these forums AGN & GTA and hardly visit any other.

I entered my first target on July 28th right after I used that same target to gain entry into the NUAH club. That was match #4 for the year and I've shot every match since. Match #8 is the last one for the year, and we got about 3 weeks left to make an entry.

I've seen lots of GTA members over here and vice versa. I think both forums have their pluses and minuses and compliment each other. If someone wants' to start something similar to NUAH over here I'm game, but I'll post results in both forums as I do anyway.

Sorry I got away from the topic, but just wanted to share a little more info on NUAH for those not aware?

This is just the type of information sharing I needed, to try an up my game a bit.

Let me play back a couple of items just to make sure I fully understand:

1. Try and "cherry pick" the outdoor range days, especially IF I am going to shoot at 100 yards and there is considerable wind. Normally, if it blows anything between 5-10 MPH, I will stay at 50 yards and sometimes less, because I know the 100 yard shooting for me is a waste of time with that much wind. It will only discourage me. So, point taken as I don't want to compound the complexity of 100 yard target shooting with wind. I fully realize this is something you cannot control, but right now I want to walk before I try and run

2. You did confirm what I was thinking, in that you adjust your POA slightly based on each shot taken. You mentioned this to me in a PM before, but the idea of using a 2nd sighter target is essential for getting a good group and zero at 100 before moving to the NUAH target. b-t-w, I'm with you on your example of shooting .92" CTC 5 shot group, with one flyer and 4 in the X ring. I realize smaller group sizes are always desired, but more X's would ring my bell too

3. I like the detail you describe as to when your group is moving left or right. I have been cheating and making scope elevation and windage adjustments, but I kind of agree that I need to try using holds for windage if my groups start drifting in one direction or another vs. trying to fiddle with a 100 yard zero that I just completed because my pellets are moving left or right, or up or down. This was very helpful and I think it is what PCPARMY was trying to tell me in another recent post

4. I am beginning to think that 100 yard shooting accuracy is related to having a higher caliber gun than a .22. I know others will disagree, but as I have been reading many of these longer range posts, it appears that the good shooters are using .25 or .30 calibers. I realize the heavier weights with either pellets or slugs and balancing that with the right velocity just improves your chances, and especially with the wind. I also know there are HP .22 shooters who can shoot at distance, but I don't think I will be one of them. I have a HP RAW HM1000X that shoots the .22 JSB 25g re-design very well at 50 yards, but have not yet tried it out at 100 at around 50 FPE. I will be doing this in the next few weeks hopefully, so we'll see

5. Lastly, (and I know you sent me this before) where can I order/buy the real NUAH targets. I think I misplaced your link. I would rather buy a stack vs. printing them so can you send me that information or post here again.

Thanks for your input as this was extremely helpful!!

Tom, you are much better at wording this than me and thanks so much for the recap. I totally agree with your list especially numbers 1,2, and 3.

As for number 4, in my experience this has been the case just as you described, but on a windless day with a laser of a gun your odds of getting 5 x's are greatly enhance by the smaller size of the pellet. Example: lets say you shoot what you think is a 5 x with .30 cal, but upon closer inspection you see one of the shots just barely nicks the 10 ring line? If you had shot that same exact group with .22 cal it would have been a 5x instead of a 4x.

The only person I know of who has shot a 5x in NUAH challenge is Brett Peterson with a .22 FX Streamline shooting the 18.1 gr Jsb's. Now if I had shot that same group with .30 cal it would have probably been a 4x? 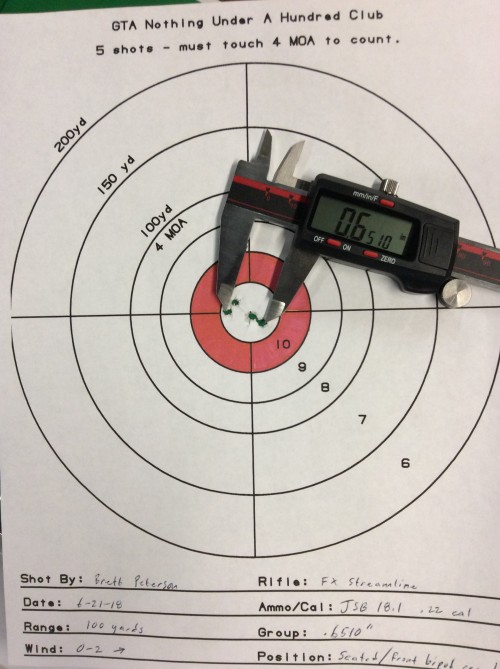 As for the targets you can go here to print them and I'll pm you the target that I use. I don't know of anywhere you can buy them, but I have considered taking my pdf file to a local print shop and having a stack printed on some thicker paper?

Oh and here's a killer 10 shot group indoors with my friend Chan and his .22 standard Taipan Veteran. This is the type of group that makes me drool! 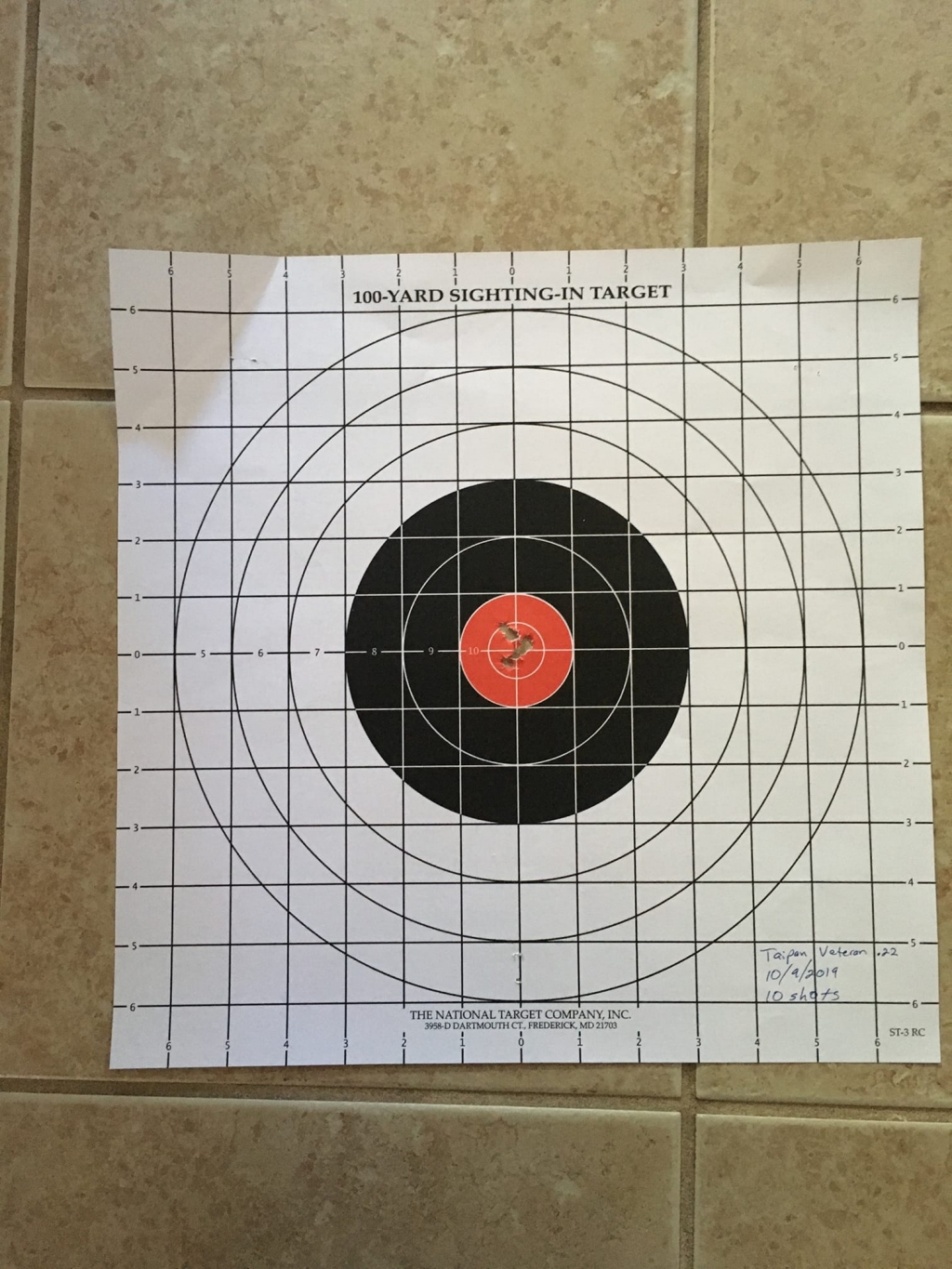 And that is why I wish there was a such thing as an indoors EBR ;-)

Alternatively, I decided to spend a couple bucks and was pleasantly surprised at getting 100 NUAH targets and 50 EBR targets printed on 110 lb Cover paper at Office Max. I think it was about $20-25. Well worth it for me vs. printing on my home printer.

With good cardboard backing the pellet holes don’t tear and it’s easier to see from distance.

Tom, wow....you went with the 110 pound paper. They should be really nice. I had my local print shop do mine in 80 pound cover and the printer would occasionally jam at that thickness!

miatamama.......I'm not familiar with resume paper. Hope I'm through with resume's with my old age! LOL

I had asked for the 80 lb cover paper but they were out of stock so the sales assistant told me the 110 lb. would work well. It did jam occasionally on them and I think they spent 30-45 minutes watching and clearing printer jams.

You are getting to be THE Boss with that boss!!!!! Nice shooting!. If you go to Extreme bench I'll carry your case!.

You are getting to be THE Boss with that boss!!!!! Nice shooting!. If you go to Extreme bench I'll carry your case!.

Doc, I thank you ,but I can only do that on very calm days with no noticeable wind. I couldn't hold a candle to those guys. Would need an indoor event to give me a chance! LOL
•••
Upvote 0

we all need to figure out how Brett can shoot the eyes out at 100 yards with that .22 FX Streamline

That is some shooting!

Honestly, 5X and 50/50 is almost impossible for me to conceive.