So my wife came in from the mail box & said you gun sounds just like a nail gun from about 100' away in the front yard . I'm in the backyard shooting crap . So I would like to know what you guys are using on your puncher breakers ( 22 cal. ) for moderator & size . I'm currently using a 22 cal . tatsu but had to drill it out to 5/16- .312 because of clipping issue's . I only have the gun set on half power. I'm going outside to put a sumo on it & give that a try but it also is drilled out to 21/64 - .328 ( original 25 cal ) because it also clipped on my marauder . Not having much luck with these things . The only mouse fart one is the original one on my cricket carbine 22 cal . will be back soon. Darell
•••

Are the tatsu & sumo internals original from Donnyfl? I know that I rewrapped my sumo for my taipan veteran standard .25 and it made it sound quieter (lower tone) with high density foam, now my neighbors don't hear the gun only the pellet impact on a bird. Oh yeah are you sure your wife is hearing the gun or is she hearing the impact of the pellet.

So I've been trying to test and quantify as many different moderator designs as I can. You can see the results here:
https://www.airgunnation.com/topic/fx-crown-bespoke-moderator-tesla-gas-diode/page/5/#post-453278

One somewhat counter-intuitive thing I've discovered is that larger diameter tubes actually have a tendency to make sound attenuation more challenging in regard to cutting that initial peak or "uncorking sound." This appears to hold true, not just on my .22, but also on my big 80 foot pound .30 cal Crown.

Because of this effect though, the Tatsu might not be your best option for sound suppression. The Tatsu very likely would be out-performed by the Tanto on your gun as it is both longer and smaller diameter. If you're having clipping issues, it is very likely you have muzzle concentricity issues as well, so going with something even longer like the Koi or 0DB may solve one issue but create another.

As an aside, I've struggled mightily both to figure out why large diameter moderators tend to be louder, and to make one which is quieter. Thus far I've met with failure, to the extent where I'm not only losing what few hairs I have left over the subject, I'm starting to question my sanity. After all, how could a design so much physically larger not be as quiet as or quieter than an otherwise almost identical one of smaller diameter? I don't have the answers yet, but I just completed another round of testing today so hopefully I'm getting there..... *shrug* It really is a very strange problem.

Anyway I hope something in all that was useful. If you have any questions I'll do my best to answer them, but for now my best advice is to try a different mod because you may not have a setup well optimized for silence, particularly if you're putting that Tatsu on top of your gun's shroud.
•••
Upvote 0

I also wonder if your wife was hearing the impact on target. It shouldn't be anywhere near that loud on half power.

With my Streamline 22 on low and mid power with Sumo, Tatsu and Tanto, all that could be heard mostly was the hammer hitting the valve.

The Sumo, Tanto and FX suppressor on my Impact 22 all make the gun quiet despite the power level.

I also wonder if your wife was hearing the impact on target. It shouldn't be anywhere near that loud on half power.

With my Streamline 22 on low and mid power with Sumo, Tatsu and Tanto, all that could be heard mostly was the hammer hitting the valve.

The Sumo, Tanto and FX suppressor on my Impact 22 all make the gun quiet despite the power level.

Could you post a picture of your FX suppressor when you have the time ?
•••
Upvote 0 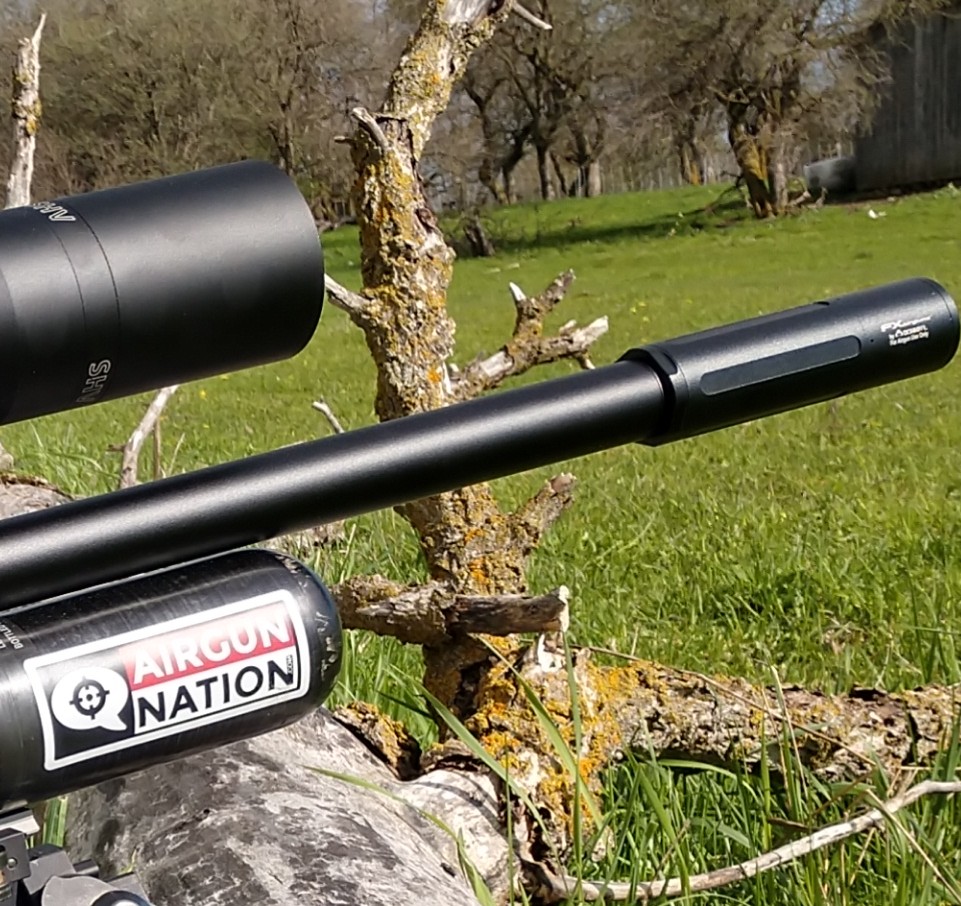 CONCLUSION (But still want to hear from the rest of you what you are using on your puncher breakers ) I'm shooting across my back yard into my (shop) to keep the noise down but did ask the wife if she thought it was impact on target her reply (do you think I'm ( stupid ) LOL no I didn't reply back . With the sumo Modded with high density foam it did make a difference then it dawned on me ( I hate to tell you guys this but I realized it was HAMMER STRIKE ! that thing is terrible worst then my marauders . ) She said that it sounded different when she went back outside to check for me but said you can tell your doing something in the backyard from the noise but not as loud . On the other hand she (Had) to remind me that its windy too ( know that's after I came in ) . Which is another ROOKIE mistake before NO WIND sighted the gun in pellet on pellet couldn't believe my eyes so when I tried the sumo they were all over the place yes I tweeked all my settings geeeezeee back too it tomorrow .( I thought the sumo changed the poi ) Thanks for everything guys if I didn't find it out by mistake I would have thur you guys . Much appreciated ROOKIE Darell
•••
Upvote 0

Hi Darrel, are you screwing directly to the barrel or the shroud? If you are using a shroud I would highly recommend going one size up. I've had customers who had shrouds that were not perfectly straight or the barrel is not perfectly centered inside the shroud. This will cause a lot of issues when you elongate the front. I know Troy Hammer tunes a lot of these guns and uses just a tanto screwed directly onto the barrel and said it's backyard friendly. Shooting at 1/2 power like Bob mentioned should not be loud at all. Other than turning the power down to 1/2, have you done anything else to the gun?
Reactions: Gunner1985 and kayaker
•••
Upvote 0

Just saw your update, every rookie makes the mistake of the hammer slap. I was one of them I love feedbacks from people who say there's no difference in the sound of the gun after putting on one of my suppressors. That's a red flag to me that they're shooting from inside the house and the sound of the hammer slap echoing within the walls can sound like a .22 rim fire. So I ask if they're shooting from inside the house and 100% of the time it's a yes. So I tell them about the joy of PCP and hammer slaps. Take it outside and it's night and day. Happy shooting!
•••
Upvote 0

I’m going to help you with the answer because I know the answer.

What you are hearing is what we call “First round pop”. In firearms suppressors the “FRP” is mostly related to the displacement of cooler air by much hotter air in the initial firing sequence.

In the case of airguns that volume of air doesn’t get superheated but it still needs to be displaced. In the case of most airguns the air is moving very fast and that displacement happens rapidly. If you have a suppressor with more air, the noise is louder.

Now in the case of most firearms it’s called FRP because it happens with the first round. The heated gassed burn off the residual air filling all the cavities and spaces behind and in front of the blast baffle. In airguns, that doesn’t happen. All that happens is more air rushes in, is slowed down, and fills up those voids. So then first round pop becomes second round pop becomes third round pop etc.

The biggest problem, most of the airgun suppressors today have horribly constructed baffle systems, have venting, and use absurd packing. Mesh screens and fabrics are ridiculous. Even though there are a number of “airgun only” suppressor mfgs they just copy old design baffle systems and monocores, vent them, then expect them to be worthwhile. In the screw on world, an airgun suppressor for up to 25 cal in 75 fpe should be no more that one inch in diameter and a max of three to three and s half inches long.
•••
Upvote 0
D

Bought a TKO moderater to attach to a Benjamin Maximus 22, didn't fit, way too loose AND DID NOT THREAD, any suggestions?

I use a Sumo on my Maximus. Donny sells the adapter for them. The TKO does very little to suppress the blast. The Sumo takes care of it completely. 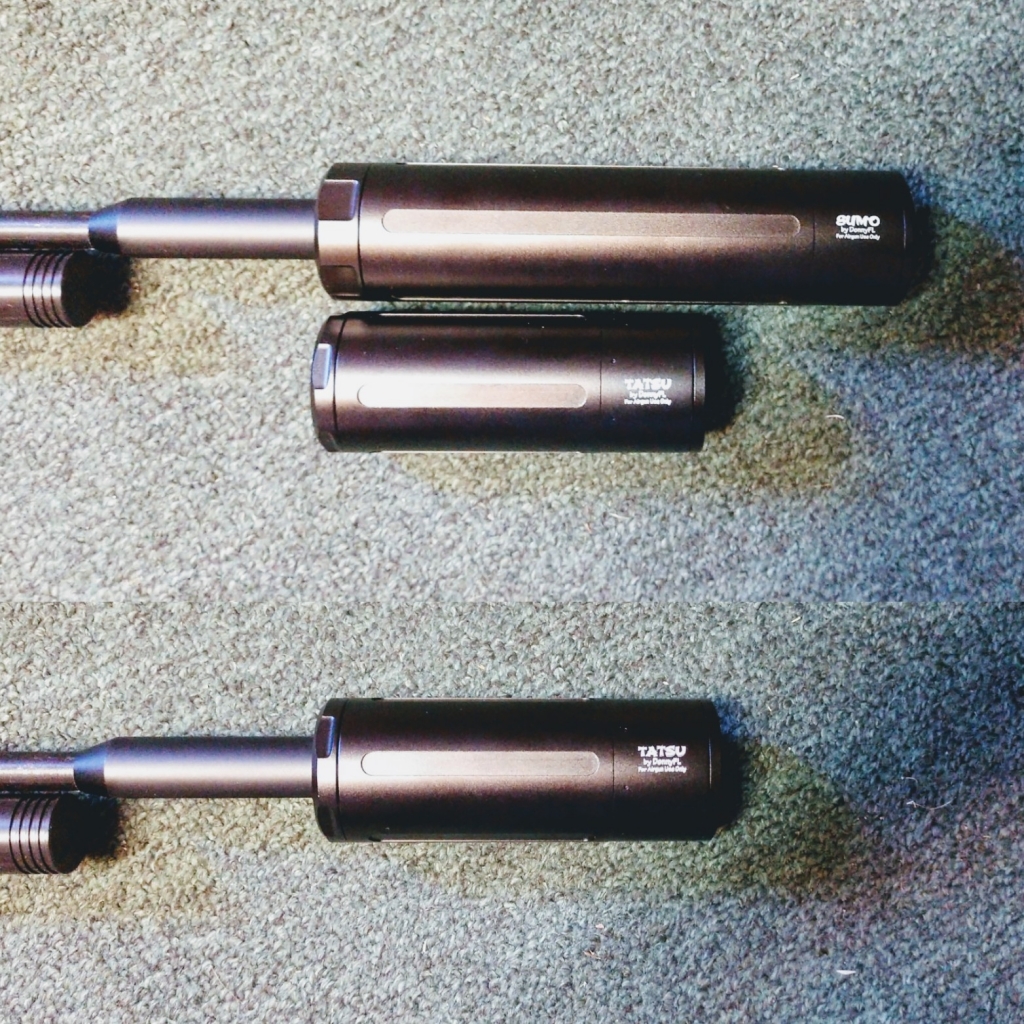 donnyfl Thanks so much for replying yes I have both your products fixed to shroulds I see your point of things being off centered . I regret not calling & talking to you personally Donny I would more hair left in my head LOL . As I have a lot to learn would one want to remove existing baffels from there shroud when using one of your moderators or just leave them in ? Thanks Darell P.S. no other mods to the breaker
•••
Upvote 0

In the screw on world, an airgun suppressor for up to 25 cal in 75 fpe should be no more that one inch in diameter and a max of three to three and s half inches long.
Click to expand...

Where do you get this information or what math is it based upon because I've done lots of testing with tight cone baffles and the results don't match your theory?
•••
Upvote 0

Kayaker, it's a personal preference. Some guys leave them in and some remove them. If it were me, I would remove the baffles to increase the volume in the shroud.
•••
Upvote 0

Singleton My problem was hammer strike not the moderator itself . I don't know anything about your stats but a lot of people use them with great results I noticed the difference just changing it out to a different one. My application was wrong from the get go but found out the right way from a master .
•••
Upvote 0

I have tried hugget, hugget belita, tko, donnyfl sumo .22 original and also the redesigned donnyfl sumo .25, and standard fx full barrel shroud on various rifles. Marauder, Armada, Fx whisper, Fx independence, Daystate renegade, and Fx Crown. And the donnyfl sumo line has been by far the best at reducing the noise on already "backyard friendly" guns. I also often shoot in my backyard or even from inside the house out into the backyard and my wife can't hear them at all with a sumo if she is in another room lol... Donnyfl has had the best customer service by far also as he has helped me out with adapters and detailed instructions and tips on installing them!
•••
Upvote 0
You must log in or register to reply here.