New to PCP and compressor

new yo this sport , I have a tank and I’m looking for the best compressor bang for buck? I see Tuxing a lot mentioned but I also see a lot of breakdowns ? Can anyone help clear air since many of you been doing this for long time ??
thanks
•••

@extex92 You’re ahead of the game if you have a SCBA tank already. Which size tank did you get? It would also help to know what your budget is like concerning a compressor. What’s the maximum that you’re willing to spend on one? Will the compressor be something you use alone or will your son also be using it to fill his tank as well? If you can think of any, what sort of features are important to you in a compressor?

Fortunately, this is probably one of the most common questions asked on the forums. If you type “best compressor” in the search box watch how much info comes up. Im not sure how much you know about compressors, but here are some links to get you started.
A lot of members swear by these compressors, but they work on them and have varying ways to set them up and operate them. https://www.airgunnation.com/topic/a-dedicated-yong-heng-subforum/#post-1127767

I believe the majority of "US" have Yong Hengs (authentic-there are a lot of copies). If you treat em kindly (i.e., keep them cool, regular maintenance, don't fill past 4250psi, etc.) they do a great job for $300 or less. Plenty of posts here filled with info &, of course, Biohazardman's bible of "all things Yong Heng". Good luck!
•••
Upvote 0
E

Thanks you , well, after the testimony I had in the classifieds I was a bit Jaded to this site but once I got into the other forums , my god , the best people commented and like you spent a good bit of time commenting and really trying to help , I I can’t remember the size of the tank , it’s a good sized one that has about two years on it before I need new inspection . I think it’s in the 70’s ? It’s not a 90 something I know for sure. I bought it from the owner of Veridium air , just up The road from me and the owner Brian has been a lot of help teaching me a lot of out this new exciting industry. He suggested Tuxing ? I will have atleadt 3 shooters , and now my new friends all want to come over on weekends now that I have made a shooting range in my back yard last week , it’s about 80 yards , I have one a lot bigger on some more land back by the river that is 360 yard shooting range. Only thing is my health is slowing me down , apparently after 4 months of being diagnosed and living with the most Excruciating pain , I was finally admitted into the hospital after my attorney had to call the emergency room I was in because this was my fourth time in there since last February and they keep releasing me with more drugs and more misdiagnosis. They found a tumor on my prostate between it and my colon wrapped around a body of nerves that why are they intense pain so if I’m a little loopy it’s because I’m on about them most strongest drugs they have just wrong keeping me from pulling my hair out every day. when they released me That’s when I bought the air rifle and was able to sit in my backyard and have fun with my new friends and the boys since I haven’t been able to do much for such a long time. I go in today to get the final results of my biopsy and hopefully they can get all this fixed shortly and I can be back to my normal self and for enjoy this great shooting opportunity in my backyard.
thanks again for your reply !
•••
Upvote 0

OW, OW, OW! Being a guy, it made me wince & reach for my "junk" reading about your ailment! Your tank has to be newer than 70's if there's still a couple years left. Here's where to look for mfg date (picture, just above the SCOTT name. Mfg date is May, 2005 on this one) 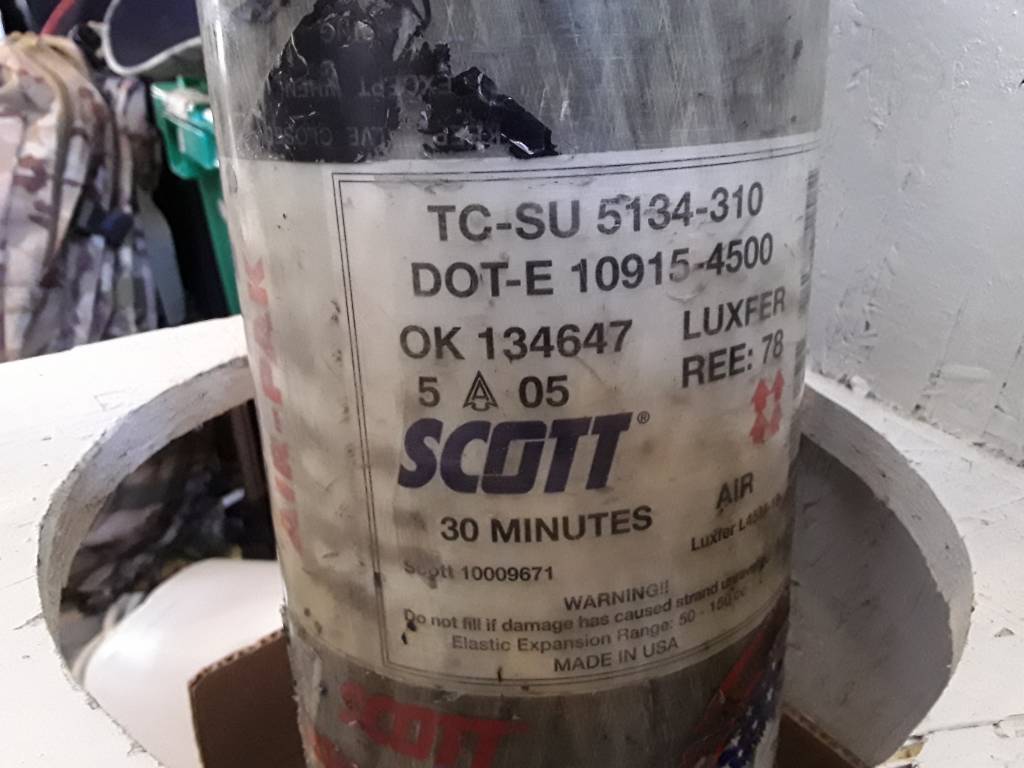 Thanks I have a carbon bottle but I can’t really read the stamps so a friend of mine said it was made in 2012 I think. No one has been over this week since it’s been a bad week , but as soon as one of them come over to shoot , I’m sure they can read it , And also remind me of the size. I’m not the sharpest pencil in the box right now with the handfuls of junk they say I need to take.
•••
Upvote 0

@Extex92 70 cubic feet is a good sized SCBA tank. Brian aka @bthurman has been very helpful to me as well. I don’t know a lot about Tuxings but I’m left with the impression that Brian does. If you’re thinking of a compressor that will see frequent to high usage I’d look into a Coltri, Alkin, or Bauer compressor. These are in the $3000-$5000 range if purchasing new.They are breathing-air quality compressors that cater to the dive, naval, maritime, and fire fighting industries among others like us airgunners. Members have differing opinions on the topic and this is mine.


As for your ailment, hang in there bud. It’s a tough one to deal with, but with decent doctors and timely access to treatment and health care you can live with it for years if you happen to be stuck with it. Your mindset and support system are also important factors. Meds can get costly also.
•••
Upvote 0

Another vote for Yong Hengs and taking care of it. Mine is over two years old and no trouble at all. Make sure you buy an original and not one of the knock-offs.

Be safe and have a great day, 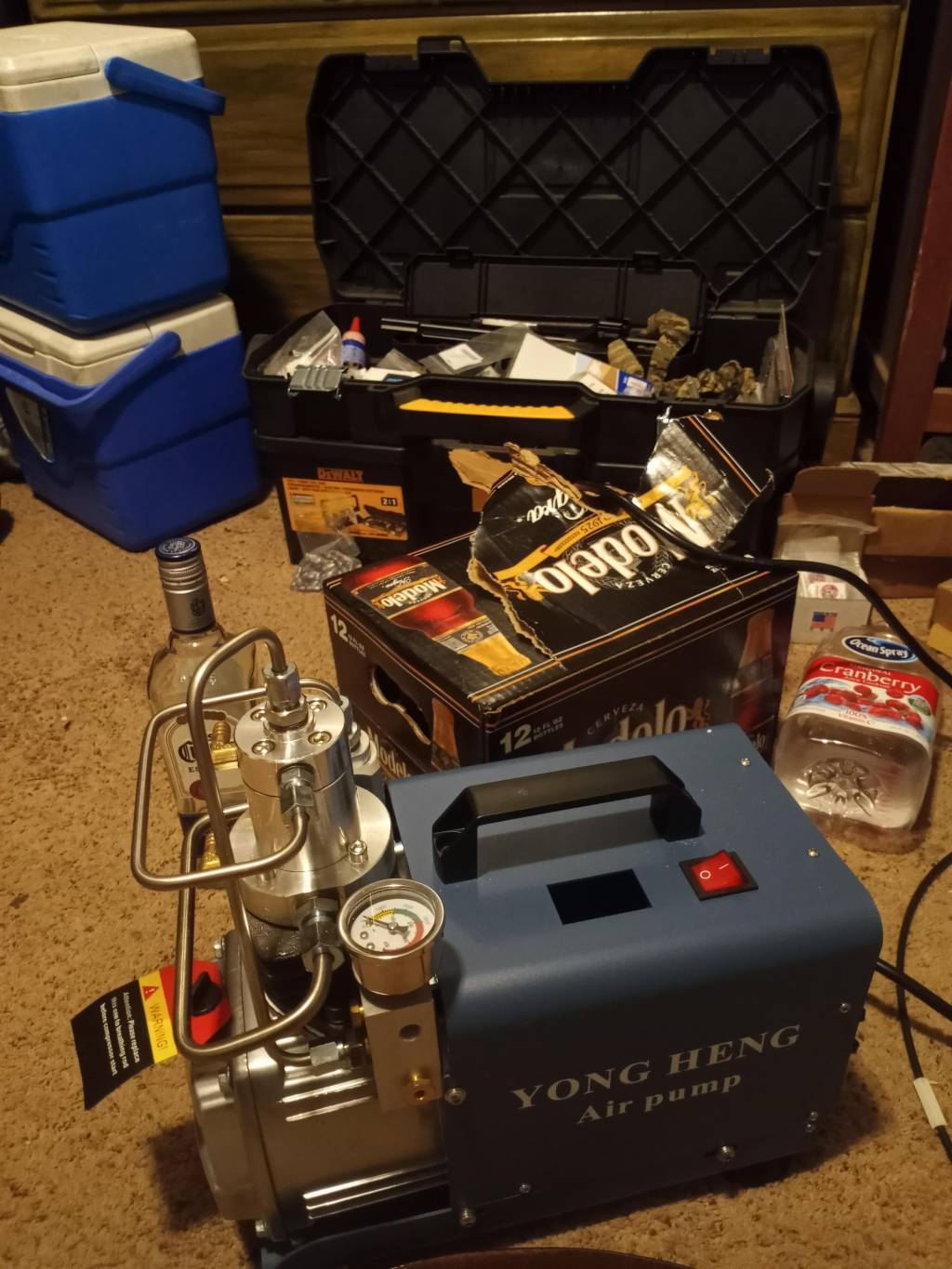 Got tired of going to to the paintball shop. Dam this little thing is heavy. I bought mobil 427 oil. Hopefully it works. Waiting on filter. Still trying to figure things out.shiping took longer .but its heavy. Comes in little crate. 248 bucks plus tax. ebay.shipping free.
•••
Upvote 0
E

Hey,guy. Maybe you could get to know products from GX PUMP, it's portable and useful. You can visit the online shop gxpump . net for more information. And there is also some discounts to save your money.
•••
Upvote 0
E

The only reason I’m going the Tuxing way is because we have a local repair man . https://www.veradiumair.com/#
Brian the owner is a certified repairman .
•••
Upvote 0
P

Gerry or others -- I notice the tank you showed is beyond the 15 year expiration, as mine is. Do you continue to use it? I see lots of expired tanks for sale on ebay so I presume people with pumps continue to use the tanks past expiration. I realize there is a risk, just wondered what common practice was for the group.
•••
Upvote 0
N

Don't know if you found what you needed, but I have a Yong Heng compressor for 2 1/2 years and so far it's been good. The Air tank I got is an Acecare 6.8 liter carbon fiber with filling valves and hose. This tank has been a good one to have. Alibaba.com is where I got mine 5 years ago for about $180.00 with everything you need. Their life time is 15 years also, but longer if you have it tested.
•••
Upvote 0
You must log in or register to reply here.
Share:
Facebook Twitter Reddit Pinterest Tumblr WhatsApp Email Share Link
Top Bottom
Forums
Calendar
Members
Watch
Menu