On Monday I saw Krale had a clearance on their Vulcan 2s and Uragans. I saw they had a few Uragan Compact synthetic stock left in 177 at an incredible price too good to pass up. Knowing Krale it should arrive next week. (Sorry folks, the “cheap Uragan Compacts with synethic stocks are gone, though have some good deals left on Vulcan 2s)

This will be the 3rd gun I’ve bought from Krale, 2 when I lived in the Netherlands and now one here. I’ve been to their brick and mortar store many times. The staff is great and their selection of air guns and firearms is a gun nuts heaven.

Also today I found out I the claim on the theft of my prophet compact is settled and I’ll be cut a check next week. Because I get the full amount back I’ll be able to cover the Uragan and a scope, Krale includes the AGT moderator and my project in the works which I should have it in hand in June.

The Uragan will be called “Shadow” and will eventually get a dip to match its name.

So now to find an optic under $400.00 that is ceiling and thanks so far for those who give me suggestions so far. 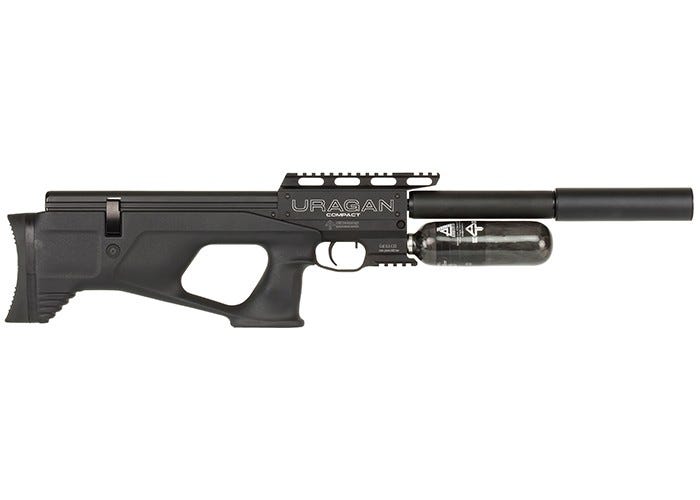 Cool gun and congrats!!! I'm a big fan of the .177 and will be interested in hearing how it works out for you. As far as scopes I have 2 Vector Veyron's and are great for the price. One is a 4-16x44 and the other is a 6-24x44. They are light, compact FFP scopes. Or just keep your eyes on the classifieds here. About 2weeks ago I picked up a Vortex Diamondback Tactical for $275! Good luck and let us see how the dip turns out!
•••
Upvote 0

@bamvet55 and @ed24, thanks. I had a 3x12 Veyron on my Prophet, which I liked, but on the lower magnification the FFP reticle drove me a little nuts. WestHunter is on the radar along with Blackhound 4x14 genesis, however, the Blackhound eye-box is supposed to be tight, and on my former Element Optics Helix that drove me nuts too. LOL...and for sure I am keeping my eyes open in the classifieds.
•••
Upvote 0
W

I recall you mentioned, in another thread, that your salesperson friend at Krales told you a big May AGT shipment was anticipated. Have you any additional information regarding this? I suspect the recent markdowns on (6) AGT PCPs might be related. Lucky you, getting that AGT moderator included, I had to pay Airguns of Arizona $110 for mine, for the standard Uragan .25 I purchased a few months ago from Krales. Just replaced the WestHunter 6-24x50 (FFP) with the Veyron 3x12 on my Wildcat MK3 .30 Sniper. Better fit, lighter and much clearer glass, going to save that WestHunter for the Airacuda Max .25 coming out this summer. WM
•••
Upvote 0

@worriedman Thanks for the information. I won't say the Krale guy was a friend, but he remember me as a former customer, how many Americans came in always asking a bunch of questions that lived in Eindhoven. All the sales guy said is they expect the AGT order with Vixens in etc, the 10th of May, if I remember correctly.

Clarity wise I like the Veyron 3x12, I will see what happens the next few days. Just happy to have another gun coming I can call my own and feel very lucky and I am extremely thankful for those who have let me borrow some guns while I have been gunless, at least air wise.
•••
Upvote 0

Very nice. Am curious to see how it compares to your past RTI Prophet Compact .177. I ended up buying a kit from Francisco this week and should have it next week. CZ/LW doesn't matter to me much. Have owned many of both brands and neither have disappointed. Assuming this will be a LW. However my .22 is a CZ.

Having owned the RTI Compact though and the Uragan standards I do gotta say for my needs the RTI has it in the bag. However weight and length of the Uragan is what swayed my choice back to Compacts similar to my Taipan Shorty. But I never did try the Uragan Compact. I think size wise it would be perfect. Power in .22 is lacking. However in .177 should be perfect! I'm sure it'll give RTI a run for the money.
•••
Upvote 0
W

Ezana4CE alerted forum of Dvor sale on Vector Veyron 3-12x44 FFP (30mm tube) for $131/$10 shipping. Ordered April 17, arrived soon after and was impressed with fit, finish and quality. WestHunter, I'd purchased few months back, was slightly disappointing, as far as fit/finish, but glass dullness and lack of clarity, around the edges, was a deal breaker. WestHunter will be fine for less expensive Airacuda Max but the clearer, brighter and more even glass of the Veyron belongs on the Wildcat, not to mention lighter weight and shorter size being a better match to bullpup design.

Talon Tunes reported a large AGT shipment yesterday, which happened to coincide with Krales AGT (6) PCP price drop. I'm interested in the new Uragan 2 and a synthetic-stock version of the V3 Long in .30. Talon Tunes only reported a 700mm V3 in .25, as a new AGT release, so it's possible I'm in for a longer wait for the Uragan 2 and synthetic V3 Long .30. Congrats on your purchase, I know you'll enjoy it, WM
•••
Upvote 0

Well, Krale had a paperwork bump and the Uragan didn't get shipped until today. UPS has it and is awaiting paperwork, whatever that means. So I should get Shadow some time next week, and though not scope / optics, I have decided to try out Athlon Talos 4x14 FFP. And I found it for between $251 to $281.
•••
Upvote 0
W

You can expect notification from UPS of $66 Import Duty fees. I used credit card, on the UPS website, to make payment, Uragan arrived next day. I apologize if this is "old" news to you, but I noticed you last purchased from Krales, while in the Netherlands, and would not have been subject to import duty fees. Do a search "Import Duty Fees" in the AGN SEARCH section, for more info, Bear-of-Grayling did some great work. WM
•••
Upvote 0

@worriedman my prophet was from Spain and I didn’t pay an import duty. I think it is a roll of the dice whether you pay it or not on the import duty, but even if I do, what I saved still makes it worth it.
•••
Upvote 0

On my .22 Uragan I bought through Krale a couple month back I had same $66ish import fee. Money saved as stated is worth it.
•••
Upvote 0
W

Based upon Bear-of-Grayling's research, not so much of a roll of the dice as you may think. Any purchase over $800 pays the Import Duty Fee. Dairyboy, myself and others have all paid the $66 fee. Fully agree that even with Import Fee, still considerable savings, over $230 saved, compared to Talon Tune's pricing, for my Uragan .25. I was completely unprepared when contacted by UPS for $66 fee, even contacted Krales, as I suspected fraud. Krales said sounded right to them. Even a bunch of Krale "springer" buyer/AGN members thought I'd been scammed. Turned out none had paid over $800. Bear-of-Grayling researched and posted findings. Well, the best surprise is no surprise, so you're looking good. WM
•••
Upvote 0

@worriedman you are probably right, I just know I haven’t personally paid import fees. However, thanks for the heads up. Once I get a specific delivery date from UPS, I will call them and ask if there is an important duty. I saved enough, so $66 is small price to pay considering what I saved.
•••
Upvote 0
W

UPS e-mailed and sent a text. Told me package was there, ready for delivery, just needed $66. E-mail had link to UPS website, easy payment with credit card, package arrived next day. (I remember arguing with AGN members, who felt I'd been scammed, how could any scammer pull off a scam using the official UPS website and also have it reflected on my credit card statement as a payment to UPS?)

Just noticed standard Uragan .177 has been discontinued, as well as the Compact Uragan .177. Interesting. WM
•••
Upvote 0

UPS Tuesday received the Uragan (aka Shadow) from Krale at their facility in Kentucky, and the guy handling the paperwork flagged the gun needing 3 letter organization review because he just read "rifle". So I get an email asking where the paperwork is for importing a "firearm", along with the email was Krale's commercial invoice for import. The word that freaked out was a glitch on invoice using the Dutch word for air rifle, luchtgeweer, even though everything else in the document was in English, even the means of propelling, spring/gas/air, the UPS guy said no 3 letter organization still needs paperwork. I explained to the UPS what it meant, even sending him a screenshot of the Google translation, UPS guy said, "Oh I guess you were right", but it was too late. So, because of his mistake, him not listening, and one word, we (Krale and I, by the way the guy handling my "case" was great and patient.) had to resubmit all invoices PROVING it was what it stated it was in Dutch, an air rifle.

So I called UPS this morning asking for an update, they said "oh yeah we got the paperwork yesterday morning, now (meaning today not yesterday) we can the rifle to customs to be cleared." Then 20 minutes after my phone call this morning, Shadow has cleared status on the UPS app. I think UPS got sick of me asking what the status was, and finally decided to do their job, and get the paperwork to Customs so Shadow can come to its new home.

Krale was excellent to work with last time I ordered from them. UPS was a nightmare...They held onto my package for over a month and didn't say why. At one point the tracking said it was lost. I called their customer service and finally was directed the office that could help me. It wasn't that is was mislabeled as a firearm like you had or having to pay duties but they said there was no paper work on it even though the forms they needed where on the shipping box. They asked me what it was and the value. From there, they dispatched it out of the Kentucky facility onto my local hub. I thought the fight was finally over but when their tracking said it was out for delivery and I saw the truck in the neighborhood through their GPS tracking that alerts you when the truck is near, they never delivered. The truck flew on by and didn't stop. This when on for a few days and at one point said the package was lost again until I had to reach out to their customer service once more. Finally the following week, I come home from work and see the beat up box that UPS did a number on. To my surprise, the contents where still in great shape, including the tons of pellets and the Throne I ordered.
•••
Upvote 0

Yeah, UPS lost their stuff. Krale didn't miss label, the guy miss read the invoice when he made the initial document for US Customs. I thought luchtgeweer meant firearm, luchtgeweer literally translates into air gun in English. Lucht is air and geweer is gun, the price in euros and usd was on the invoice UPS said they didn't have, which was in the email they sent me they didn't have.
•••
Upvote 0

Import duty is $54 and some change. Paid and still way way ahead on the savings.
•••
Upvote 0