My Next Star Wars Build: The MANDO-MARAUDER! This is the way.

THIS IS THE WAY. THE MANDO-MARAUDER.
So it is time to start on another Stars Wars theme build! This build will be a Mandalorian Bounty Hunter slug slinging carbine with the look and feel of a blaster you would see in the Mandalorian's armory on his ship, the Razor Crest. This project is sponsored by Pyramyd Air and a HUGE thank you to the crew over there for the support. 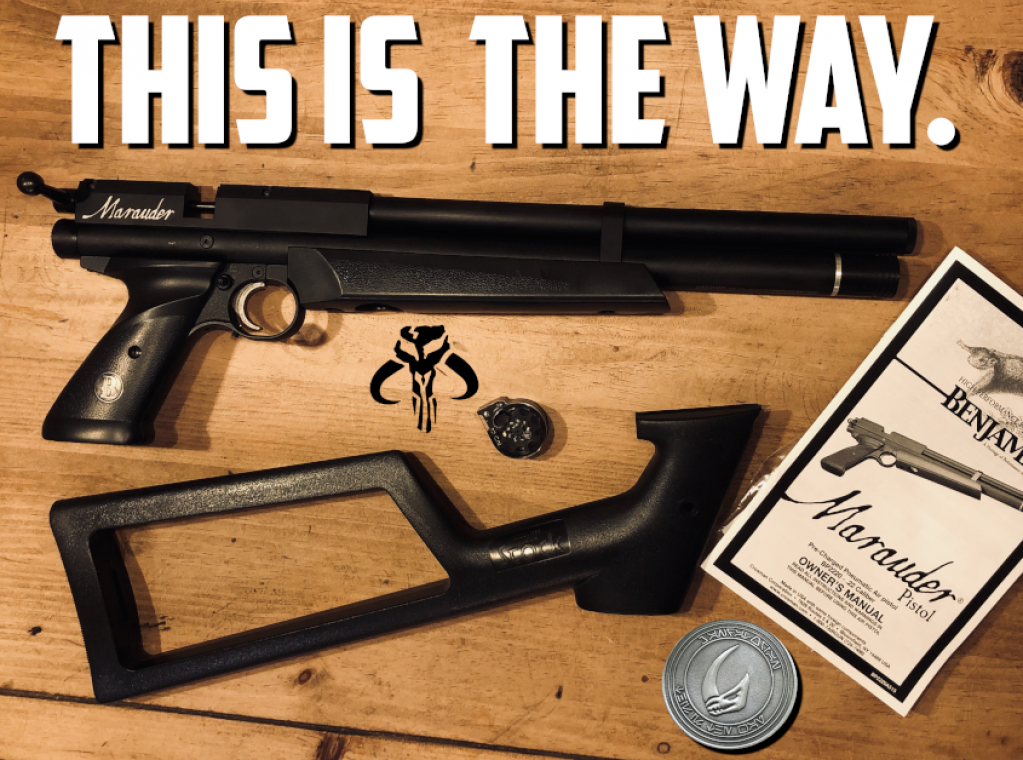 This build is going to start off as a bone stock Benjamin Maurader Pistol from Pyramyd Air. All my builds start off with picking up gear from PA or Airgun Depot. Biggest selection of airguns online hands down.

I wanted to start this build off with a Crosman based airgun for a couple of reasons. #1 Made in America! #2 Other than the cosmetic treatments I will l be doing to this thing to give it that "Star Wars" look, there are some really well respected modders and tuners in our community with a TON of experience to take these pistols and rifles to the next level.

Not only do I want this thing to look Mando-awesome, but have some real knock down power just in case I ever come face to face with a Mudhorn and need to put it down with a slug. I might keep this in .22, but might go bigger. I haven't decided.

I will for sure be using the Benjamin Marauder High Power Tuning Regulator By Huma Air Regulators to give me the plenum space and consistent shot velocities I will be looking for to sling slugs from this carbine. 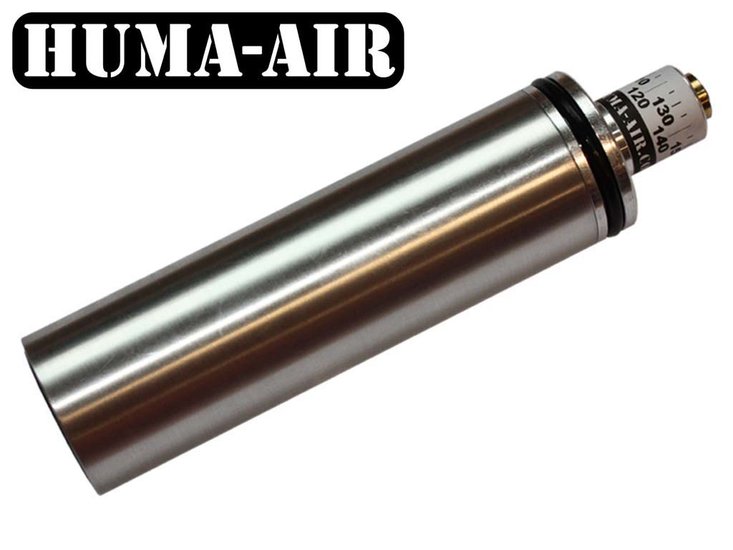 I will be doing this build a bit different vs. the Han Solo DL-44 or the X-Wing Theme build. The DL-44 took a lot of effort to make it as screen accurate as possible. The X-Wing AirForce Airguns TalonP was meant to capture the feel of something that wasn't a gun at all - a star fighter.

I am going to build this gun as a Mandalorian Bounty Hunter concept carbine based on a lot of Star Wars and Mandalorian history. I will be researching a lot about the art form of model builders from the original Star Wars Trilogy. 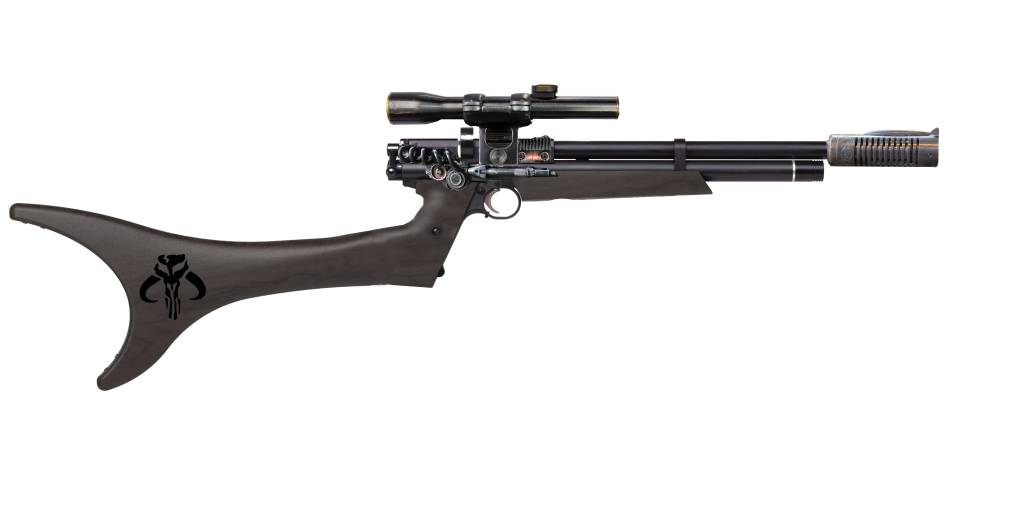 If you are as big of a Star Wars geek as me, you understand the deep and meaningful history that went into the original blasters and weapons found in the Star Wars story. Many of the original rifles and pistols were based on WWII era weapons with a few "add-ons" to make them look more space aged, but keeping with a battle worn and rugged look.

Fun Star Wars fact! Most people can recognize many of the original star wars blasters based on some well known firearms, but did you know in the most recent Mandalorian series, many of his guns are AIRGUNS???!!!! Yup - that is right - the Mandalorian is a fellow air head!

There are quite a few scenes where Mando goes to his arms room on board his ship where there are tons of sweet looking blasters. I will be using a lot of the design concepts from these blasters to build my own.

Those "add-on" bits and pieces are referred to as Greeblies and is a term coined by George Lucas to describe the small parts that were attached to weapons, ships, walls, clothing. droids, etc. to give them depth and texture.

Back then, CGI was in its infancy and no one could imagine the 3D printing capabilities we have now days. The original prop makers and designers had to use stuff they found in the scrap yard and their imagination. That is how I will lbe doing this build. No 3D printed plastic stuff.

You'll also notice that in the Star Wars story there is a lot of use of wood, leather, and other "organic" textures. I will be incorporating some of these items into this build. So this gun won't be something you will specifically see in the Star Wars story to include the new Mandalorian Series, but it will feel like it was plucked right from the set.

I have some ideas of where I want to go with this taking design ideas from multiple blasters from both the actual series and the fan base of builders who are building on the the original story with their own creations. 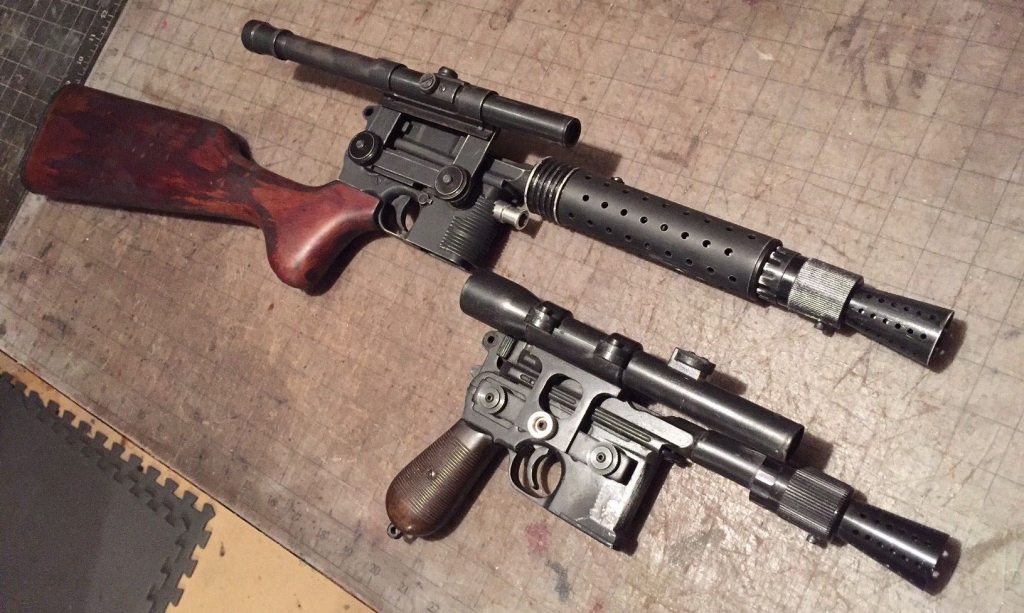 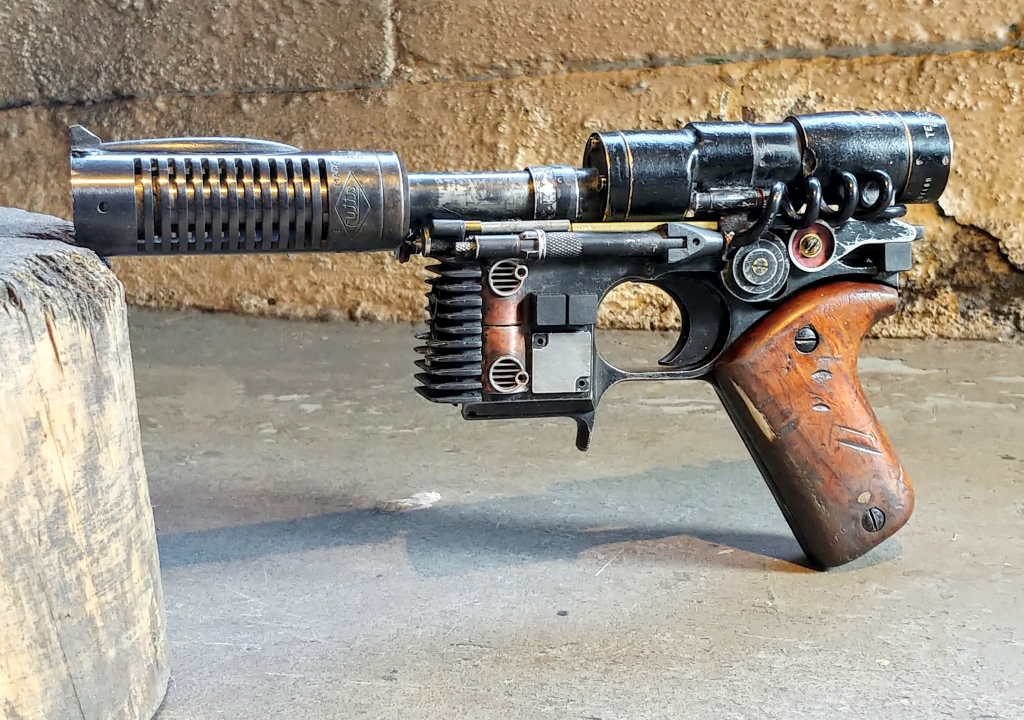 First step - disassembly and distressing. When most people get a new airgun then pamper it and don't want a single scratch on it to keep it looking new for as long as possible. Not this one! I need to make this thing look like it has seen battles all across the galaxy and maybe even spent some time in the belly of a Sarlacc on Tatooine. I even bought a lighter branding iron to possibly burn the Mandalorian logo into the wood grips or stock. We will see where I go with this.

I will be posting photos along the way, but for starters here are some ideas that I may pick and choose from during the build. Go out and pick up a Benjamin Marauder Pistol too and start your own build along with me! Get one here: https://www.pyramydair.com/s/m/Benjamin_Marauder_PCP_Air_Pistol/2367

Stay tuned and MAY THE FORCE BE WITH YOU!
•••

Very cool project! I was 12 or something when the first movie hit so I have always been a fan too. You should give yourself the deadline of May the 4th, just for inspiration. Good luck!
•••
Upvote 0

Love to see a regulated slug gun marauder pistol. Lot's of work but anything can be done. Now the " Benjamin Marauder High Power Tuning Regulator By Huma-Air " being for the larger marauder tube wont be a drop in so you are taking which road to modification?

Love to see a regulated slug gun marauder pistol. Lot's of work but anything can be done. Now the " Benjamin Marauder High Power Tuning Regulator By Huma-Air " being for the larger marauder tube wont be a drop in so you are taking which road to modification?

I am new to this Marauder platform. Is the air tube a different diameter for the Rifle vs. the Pistol? I am going to do some kind of double bottle set up as well to increase shot count.
•••
Upvote 0

This should be pretty cool. I have a Marauder rifle that I have been dying to start modding so I will be following along on this intently!
•••
Upvote 0

Got some photo updates. Decided to change a few things up on the project and use the DonnyFL Sumo on the muzzle with a little Star Wars bling with some T track I had laying around from a previous Star Wars project....

All I can say is, I get by with a little help from my friends... Huge shout out to Maverick Stone, Eric Smith, and Rich Dudek for talking me through some ideas for the Mandalorian Carbine concept built.

Also a big thanks for the tech support at Pyramyd Air for pointing me in the direction of this Air Venturi AR tactical stock adapter for the Crosman / Benjamin Marauder Pistol platform! Of course PA has a part for everything!
Check it out: https://www.pyramydair.com/s/a/Air_Venturi_Tactical_Stock_Adapter_Fits_Benjamin_Marauder_Air_Pistols_Crosman_17xx_Series/5322?fbclid=IwAR1Htx6cw16UqS6dYV2aZvMj3ZrDKPfp6r_u2XBmbVxf0ohcXcYj6M_TEQQ

I went and got a AR buffer tube from my local gun shop and started mocking things up. Also, instead of diving into having someone CNC this thing, I decided to take a stab at hand shaping the rear wood stock by hand with a printed paper template based on the 3D Printer / CNC files Eric and Maverick helped me work on.

The issue I am running into is the funky ergonomics (or lack there of) and finding a good sight picture with the stock. I think with this new Air Venturi stock adapter, I have it figured out. This thing is pretty sweet in that you can adjust it up and down to really dial it in with the stock.

The bottle idea came from the GENIUS of Rich Dudek. He can even do a double bottle manifold if I decide to go that route. I have 2 small CF bottles in my stash just waiting for a crazy build like this. Still debating single or double side by side 350cc bottles up front. What do you guys think? Single or double?

This is a very rough cut of the read butt stock -TONS of shaping and sanding ahead of me... Stay tuned! 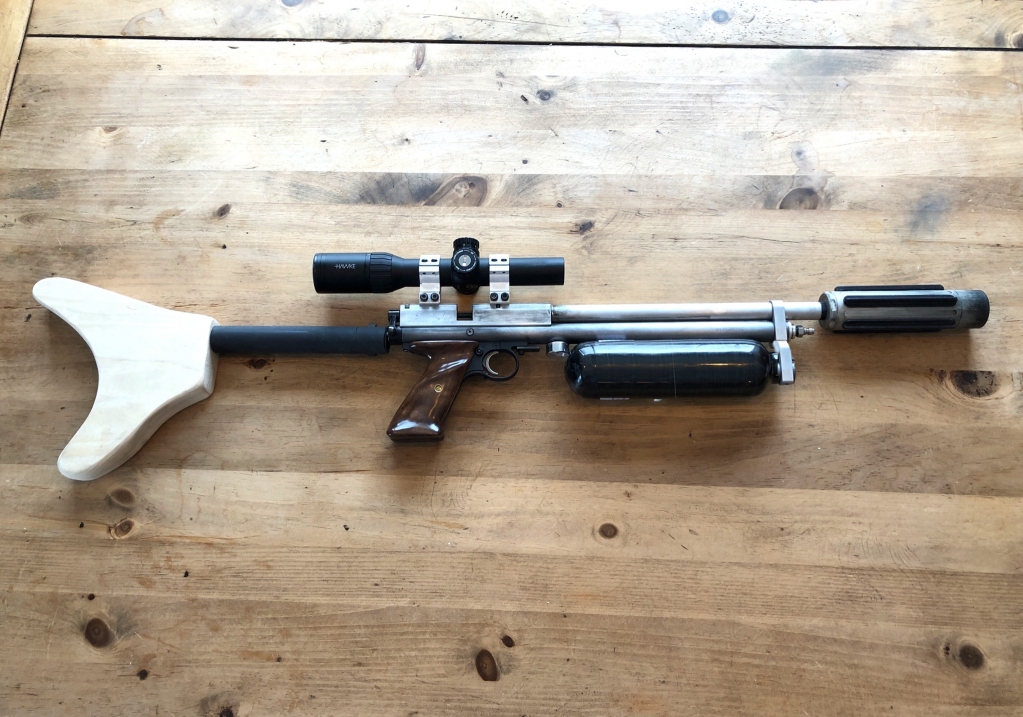 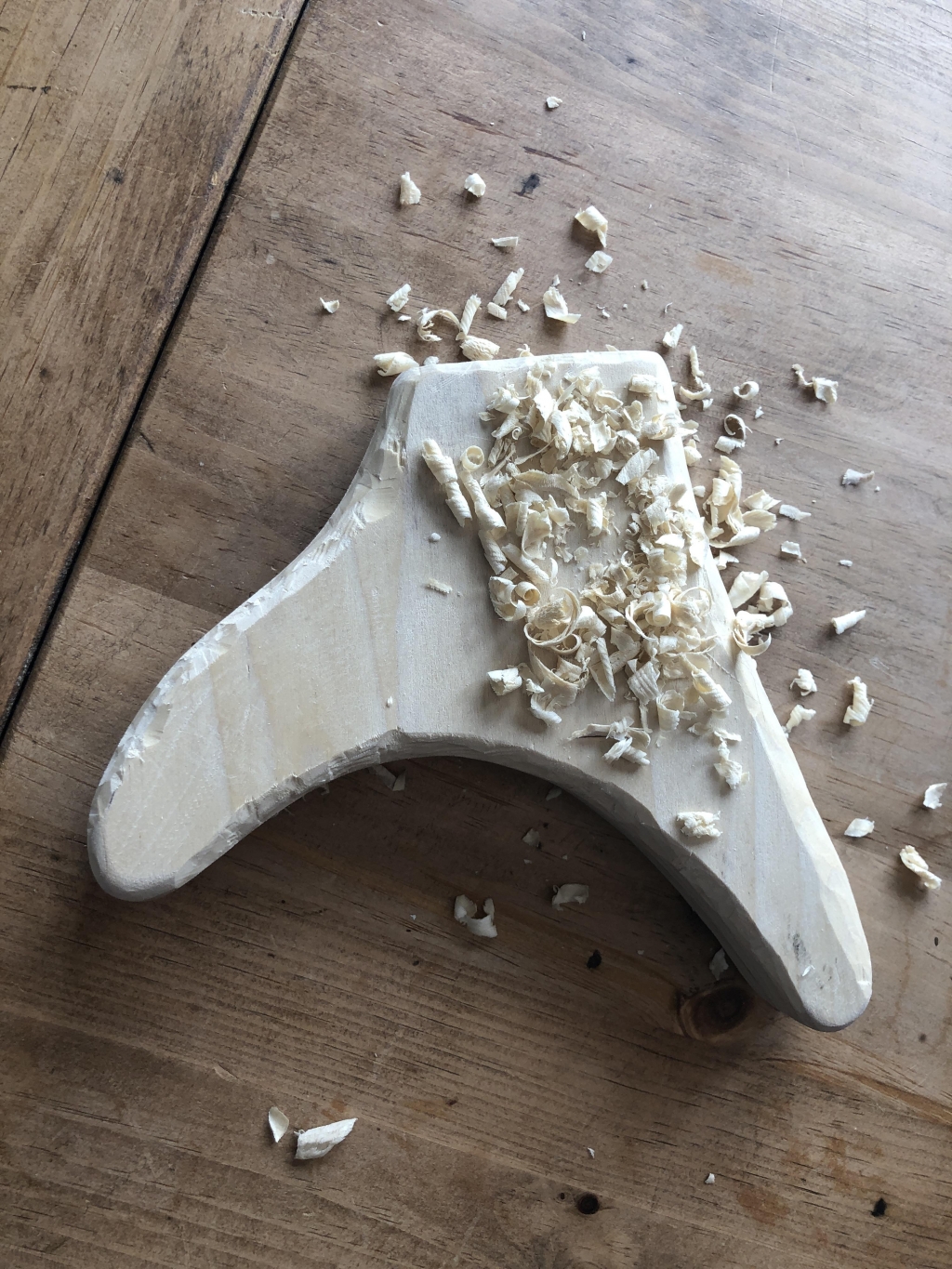 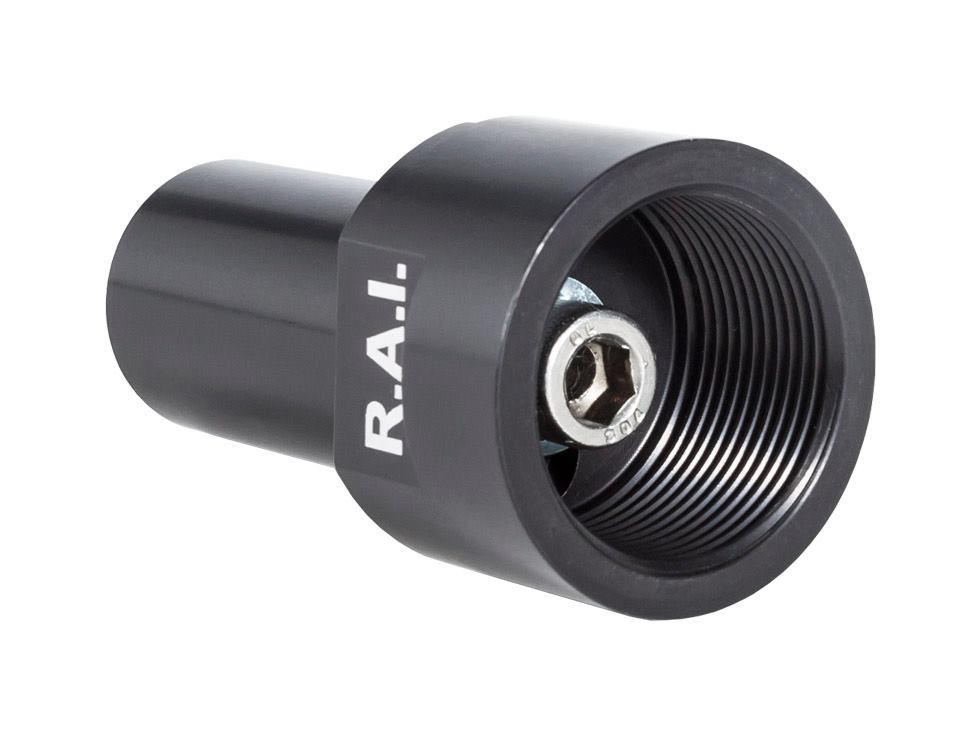 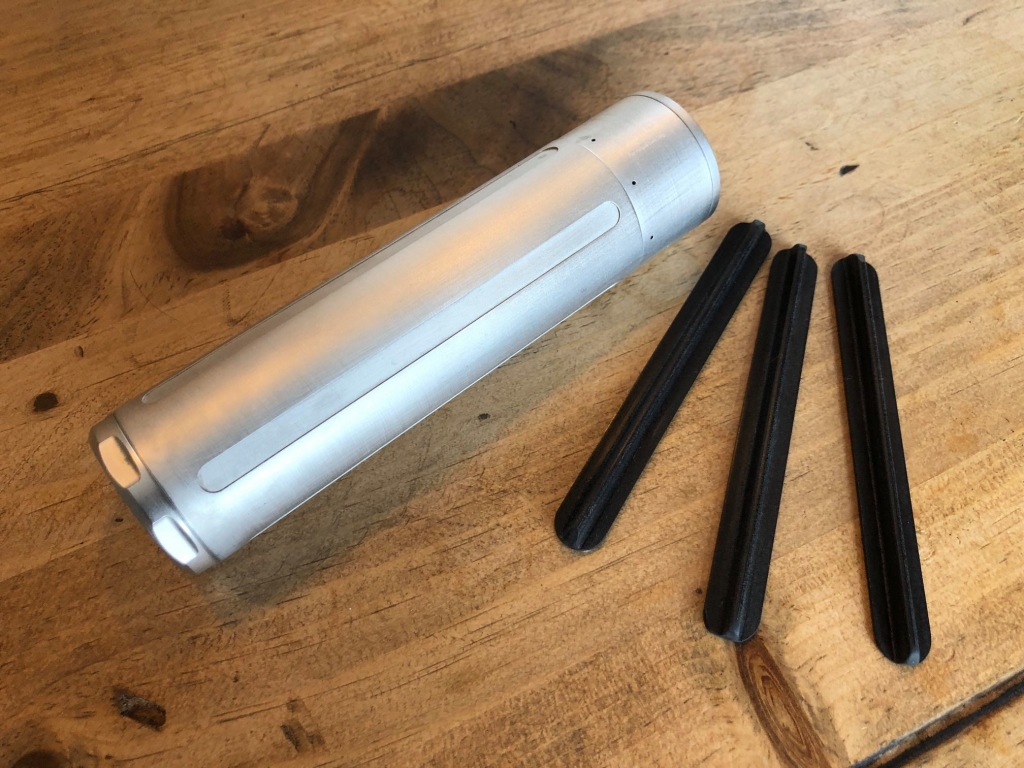 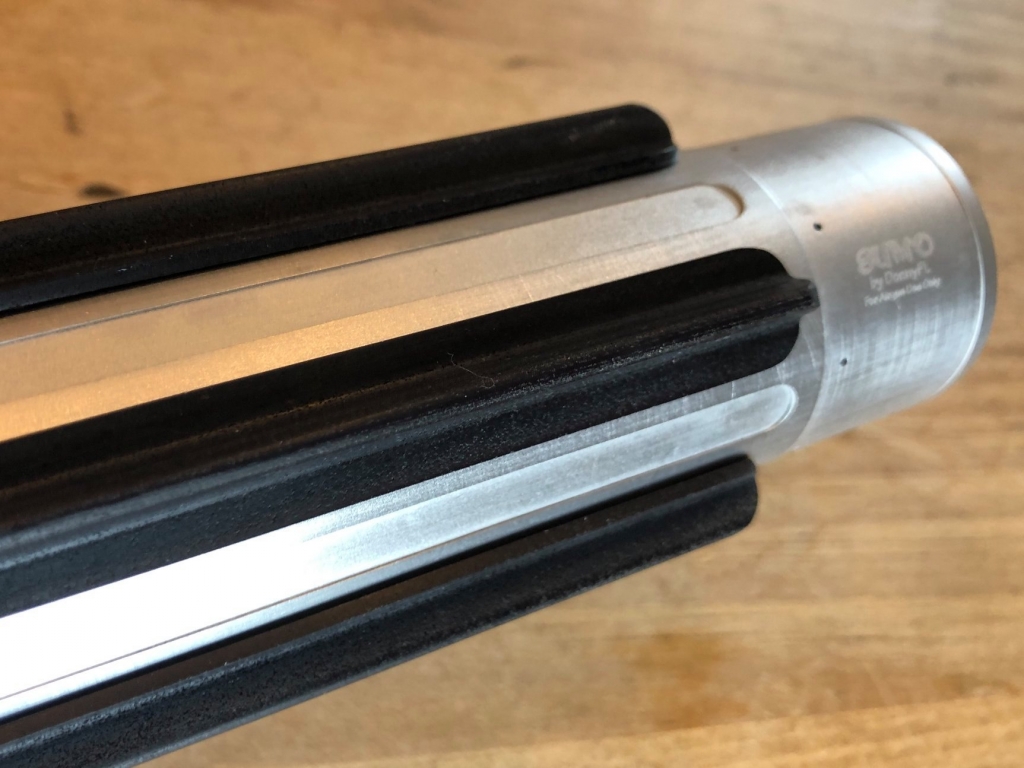 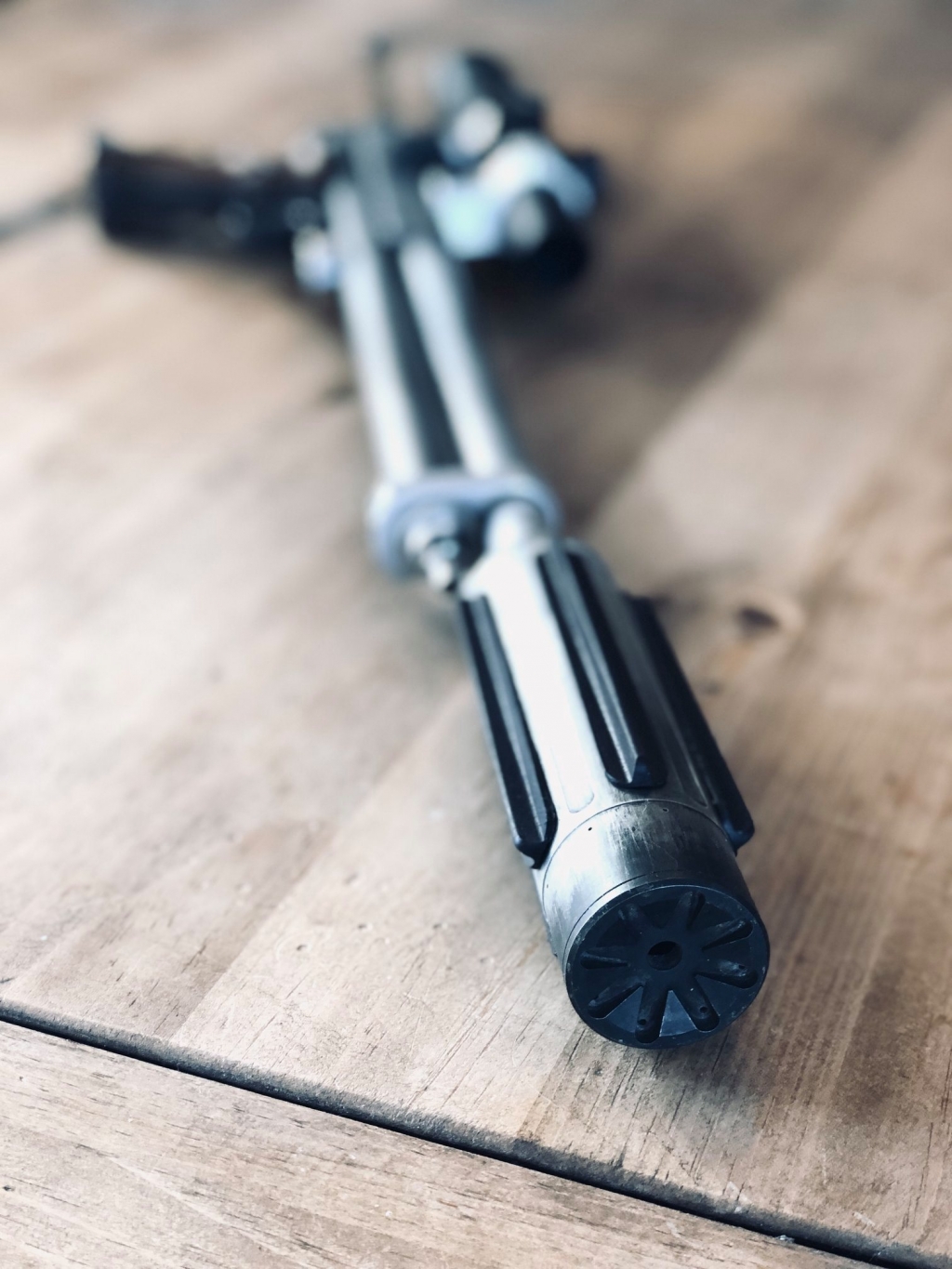 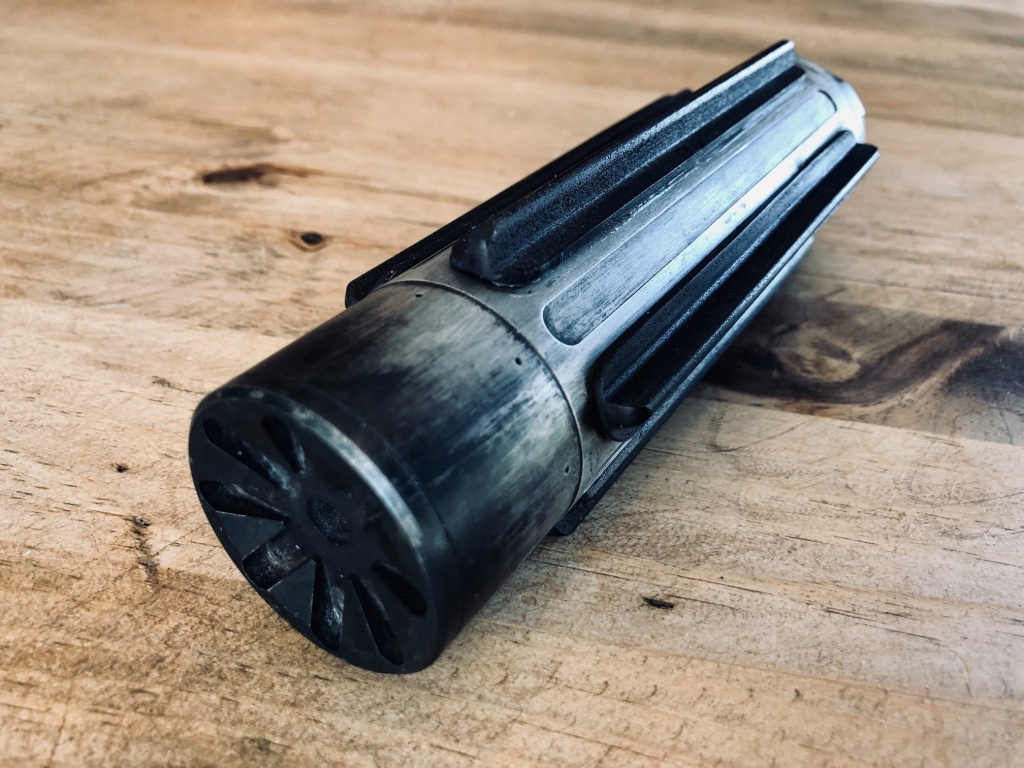 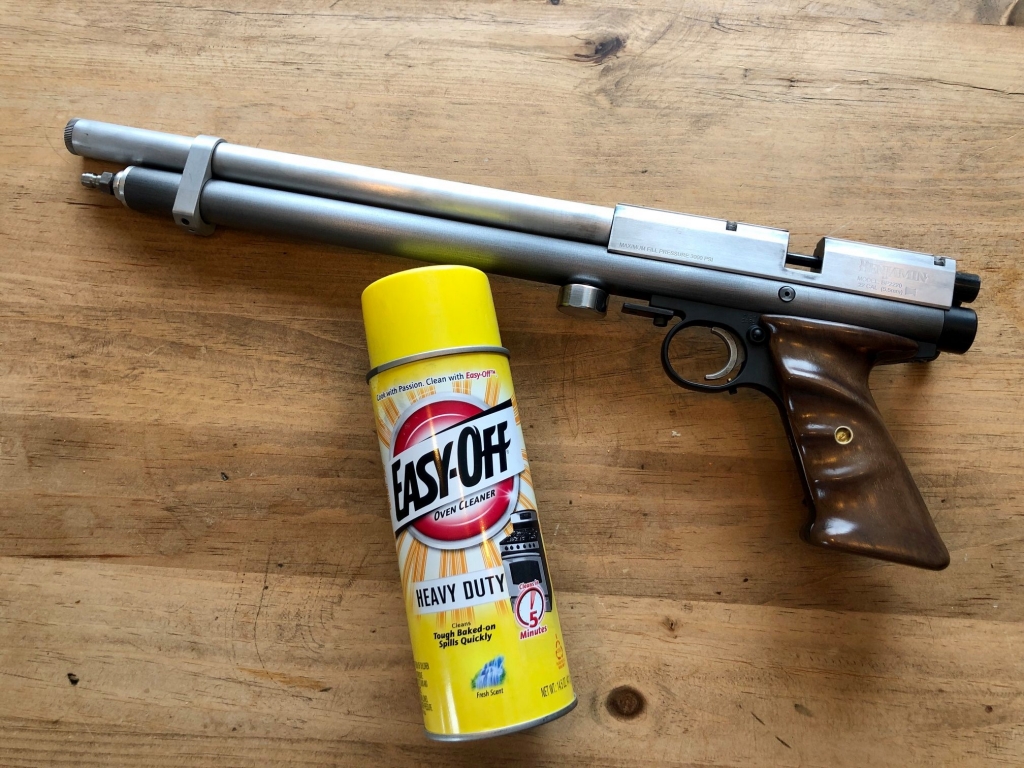 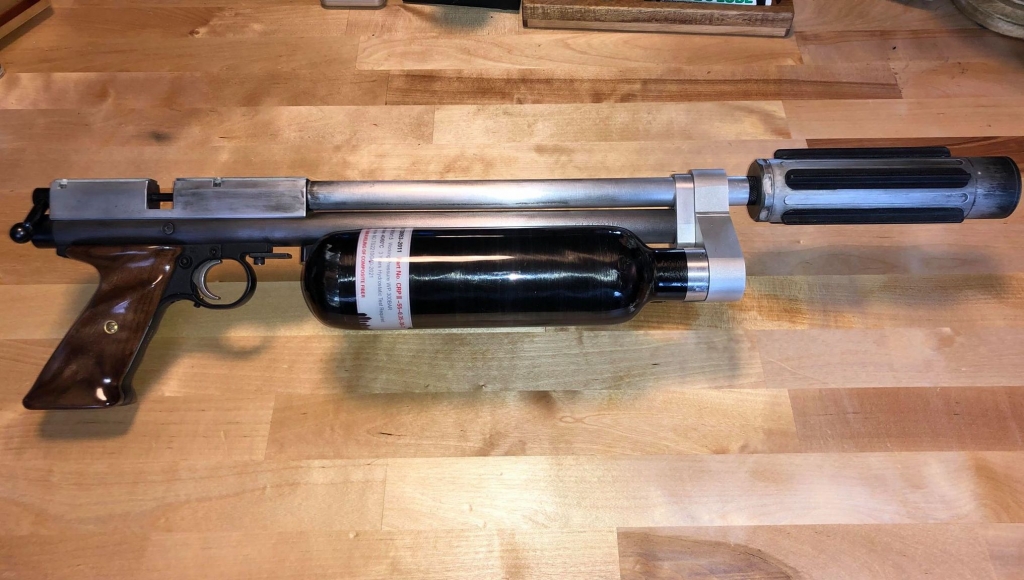 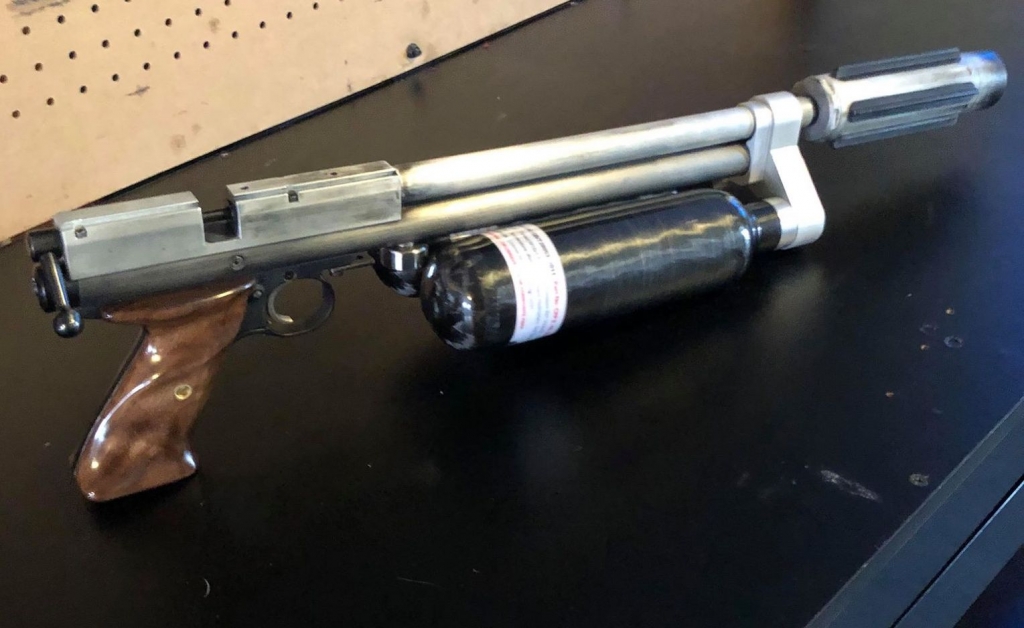 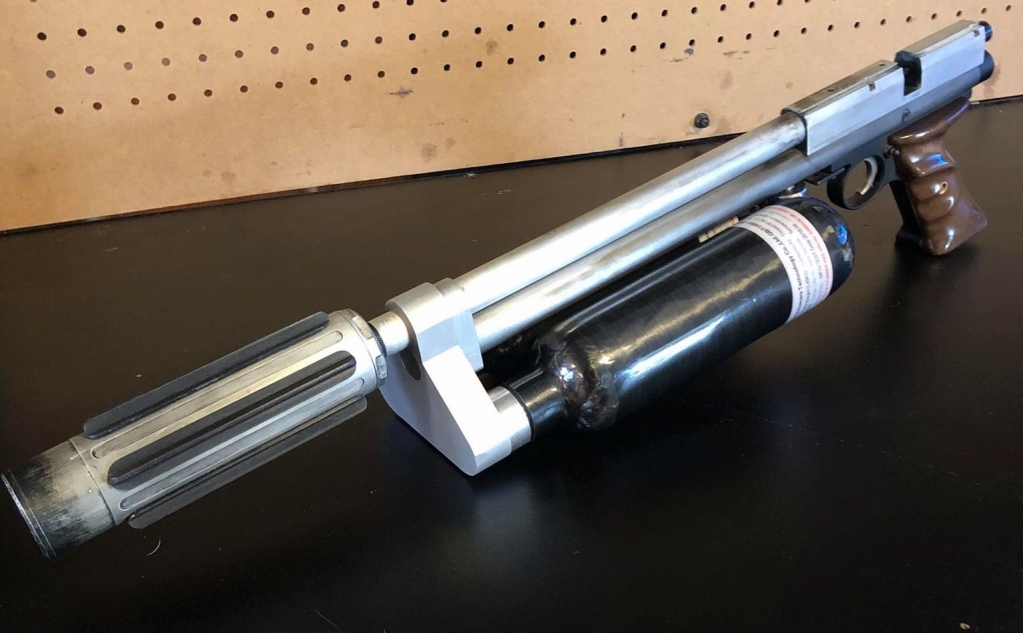 This started off as a simple Benjamin Marauder Pistol I got from Pyramyd Air and is slowly turning into something I could have only dreamed of! Rich Dudek can take a crazy idea and turn it into a reality!

While I have been shaping the wood Mandalorian carbine stock to go with these awesome Maverick Stone wood pistol grips, I sent it off to Rich because he had some "ideas" for this project. He is adding a Huma Air Regulators inline regulator for 160 bar regulated pressure using the original air tube as a HUGE plenum with double 350cc 300 bar carbon fiber bottles mounted into a custom manifold that is a pure Dudek work of art!

This is going to be a galactic bounty hunter's dream .22 cal PCP! With that Star Wars inspired custom DonnyFl suppressor hanging off the end of this gun - it is going to be quiet AND deadly.

If you have some wack-o airgun ideas you have been thinking about doing - definitely get with Rich because he will take that crazy idea and make it a reality.
•••
Upvote 0
W

I am liking what I am seeing so far. Please provide a weight for this custom Prod once you get it finished.
•••
Upvote 0

I need that in my life. Looks freaking awesome.

If you don't mind disclosing, how much does it cost to have something like that modded?
•••
Upvote 0

I need that in my life. Looks freaking awesome.

If you don't mind disclosing, how much does it cost to have something like that modded?
Click to expand...