I figured I would update you guys that are pushing your Mavericks pretty hard with the heavier slugs. If you want to get the most weight that will fit, I believe the Griffin 36 grain flat base slugs are going to be the limit in .22(without magazine modifications). I ordered some hoping that they would fit, and they do! They cycle fine and no hang ups. They also seat just fine, with no issues pushing them home. By the looks of it, that is going to be the limit. There isn't much room left that I can see.

I measured them at .4225 inches long. The magazine might hold a .425 inch long slug, but I don't know for sure. I think that will be pushing the envelope. I hope to get some on target with in the next week or so to see how they do. My superior heavy barrel seems to prefer .218, and that's what these are. I did some chrony testing tonight to get the gun setup for some target testing. The big question is going to come down to harmonics I think. At full tilt, the gun was slinging them at 1032 fps! If I back it down to 1000-1015 fps, the gun is much quieter and smoother. I suspect the 1000 fps range is going to be the happy place for them, since that's a little below the max speed and a little less "violent" of a shot cycle. I will update as soon as I get some on target.

I previously did some testing with some VK 34 grain and some Griffin 34 grain slugs. Both slugs showed promise, but I think I was having some harmonics issues that were temperature dependent. In the heat of the day, they were shooting lights out from the superior heavy at 1000-ish fps, but the next morning the groups opened up. I tried speeding them up and slowing them down that morning, and they refused to group as well as they did the previous afternoon. I believe they would have done better with a little higher reg setting and tuning below the knee a bit. Since then, I carbon lined my liner, so I know that will change things too. Hopefully, it won't change my accuracy for the worse... I will try and give those a test when I test the 36 grainers.

On another note I think the .30 magazines could easily handle some 70 grain flat base slugs. I don't really intend to test that theory, but thought some of you may want to know. For me, the NSA 65.5 grain slugs are all the weight I need, and the gun ain't gonna have the juice to send them too fast anyway. I think mine topped out around 968 fps with those, and that's pushing the gun hard(Huma extra high pressure regs). Yep, that's 136 fpe! While it is cool to see what the limit is, I don't think I'll ever actually tune the gun for that power level. Maybe 130-ish fpe, but that's about it. I don't see a reason to push it that hard, because 130 fpe will do anything 136 fpe will do, and is less likely to break the gun

Anywho, I just wanted to share what I've learned in the Maverick magazine front, so you guys won't be wondering what will fit the magazines. I'll update when I get rounds on a target!
•••

Thnx for sharing, Donny. Wish I had a maverick o follow along, and assist in testing some of these concepts.
•••
Upvote 0

I would have thought more people would have been interested in that bit of info for the Mavericks. I guess most of the guys trying to shoot the heaviest stuff that will fit, are shooting Impacts. You really don't see a lot of people on here pushing their Mavericks that hard. I know there are a couple, but not as many as there are with the Impacts.... I think a lot of folks are missing out, because the Maverick is a darn capable high powered slug shooter! Mine will be even more capable when my 300 bar bottle shows up
•••
Upvote 0
A

Thanks for posting the findings. These Maverick's are full of potential; though as you indicated, not as loved as the the Impact's.
•••
Upvote 0

I use the Griffin 32gr Boat tails at 1010fps; they fit in the magazine and cycle fine with the slug power kit with the pin probe. This is with the 700mm barrel and I purchased some $12 barrel harmonic spacer that fits on the carbon fiber bottle and under the barrel. Love the Maverick and it's my around the house chipmunk and squirrel killer albeit 70ft/lbs is definitely overkill but better to have more than not enough.

Did you see that Eaglevision is now making a magazine for the Maverick? I ordered one as I have one for my Impact and it holds the Boat Tails perfectly...
•••
Upvote 0

That is some solid power! That will take care of pretty much any critter you want right there, no doubt. I have seen the Eaglevision magazines, and almost purchased one a few times, but managed to restrain myself, lol. Their mags are very well made from what I hear, and I think you'll like it. Do you have a link for this harmonic spacer you're using? I curious about what it looks like. I don't like the idea of wedging something between the shroud and the bottle, but if it works, then who am I to judge. I pretty much leave it at carbon lining the barrel, and tuning to get the harmonics under control. I think the harmonic tuner that FX will be selling is a solid concept though.

I did get to do a little testing today with the Griffin 36 grain slugs, and they did not disappoint. I didn't have much time so, I only tested them from 970-1015 fps. They shot pretty well at all speeds. At 1015 fps, I managed to put 4 through the exact same hole at 30 yards! I don't mean a ragged hole, I mean it looks like one shot on target. I stopped at 4 shots, because I chickened out on the 5th shot, lol. I didn't want to mess up that group! That is about the best group I've ever shot I think. That isn't to say I don't have ammo that is as accurate, but I don't usually have the patience for shooting groups.. Obviously, more testing is required at longer distances and whatnot. If that accuracy holds, I will try and get a porker with those 36 grainers! So far, it is looking like the Griffin heavy slug option is a winner! 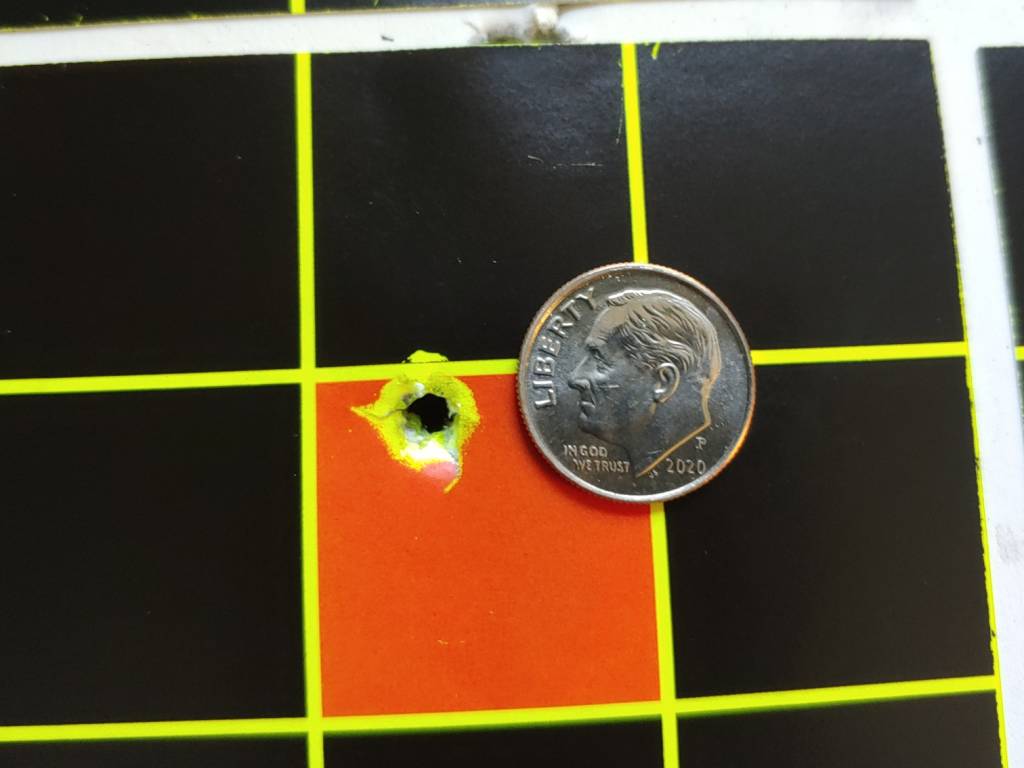 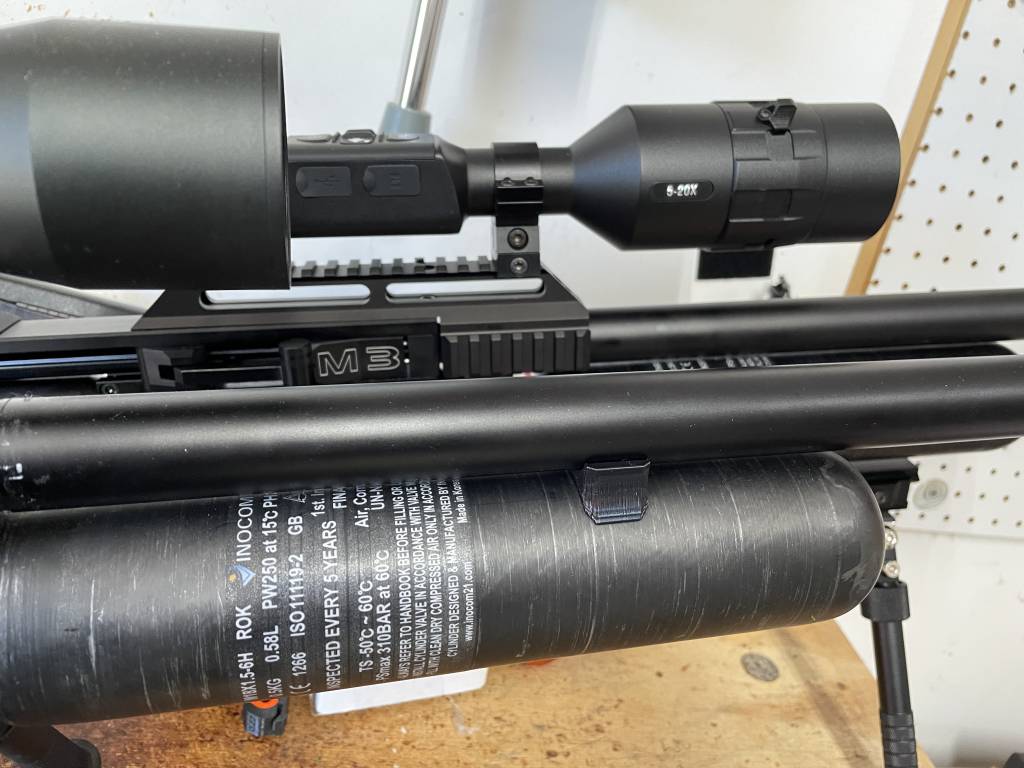 small little piece but stops any barrel shake. I have seen the new barrel harmonic tuner that FX is coming out with but I am not one to just sit and wait and this was $12 versus $$$. I did install the carbon fiber support liner (purchased from Ernest Rowe) which helps and I am waiting for some barrel sleeve tensioners for my 700mm and 800mm barrels.

Oh, okay. That's kind of what I was imagining. I've done that before with other guns, and it did make a difference. As some point, I may try to work out a way to make the barrel/shroud more rigid in the gun. At the moment, I don't need to though. The gun is a laser in .22 with a lot of 218 slugs, and I usually have it tuned to shoot the NSA 31.2 grain at 970 fps. It is crazy accurate with those. In .177 I have an Alfa Precision barrel that I machined for it, and it does well with the new NSA 20.5 grain, and the Griffin 22 grain slugs. The .30 is also a laser with everything from 54.5 to 65.5 in NSA slugs shooting in the 950-970 fps range. The .22 and .30 are superior heavy liners, and they're carbon lined, fwiw. This dang gun is just so insanely accurate with so many different tunes. It is literally a do it all gun for sure! I can't wait to get my 300 bar bottle installed. That will make for some crazy shot counts.
•••
Upvote 0

You're making 71 fpe, and FX rates the gun at 71fpe, so you can't really complain there. You could probably get a little bit more out of it, if you took that second reg to 155-160, but 71 fpe ain't bad at all for a regulated gun! The same settings in .25 would be over 80 fpe easily, and .30 would be well over 100 fpe. The gun can make much more power with the larger calibers, because the air has a larger surface to push on with a larger projectile. It will definitely do the advertised power with the larger calibers, a little over in many cases. If you're worried about turning your regs up any higher, the Huma extra high pressure regs will solve that problem, but they aren't really necessary for most people's normal tunes.
•••
Upvote 0

But either way I don’t enjoy shooting the 34 gr because it pretty much requires me to max out the gun in order to get the results.

I feel my Maverick really shines pushing 30 gr VK’s to longer distances. I took a rabbit at 195 yards the other day so I can’t ask for much more than that. I have also had great results with the VK 30 gr with the 2-S nose as well. Stacking one on top of another at 80 yards on a calm day.
•••
Upvote 0

I normally shoot the NSA 31.2 grain slugs in my .22 at a milder tune as well. They do very well, and the gun isn't even breaking a sweat. The longest shot I've made was popping an egg at 325 yards, and I'll be the first to tell you that wasn't a first shot hit. It's really darn reliable at 200 and under with the 31.2 grain. I normally shoot the NSA stuff for target and pesting, just because the price is so good. I only use the heavier ones on specific hunting situations.
•••
Upvote 0
You must log in or register to reply here.
Share:
Facebook Twitter Reddit Pinterest Tumblr WhatsApp Email Share Link
Top Bottom
Forums
Calendar
Members
Watch
Menu