I've got Hubens and SK-19's on the brain. My biggest draw back from wanting/getting one is how much trouble to clean the barrels and how often they dirty up a barrel? I know from minor experience shooting slugs, they will dirty a barrel much faster than pellets.

Gregor's video is the only one I've found that addresses this so far. Still not satisfied with pushing and pulling a cleaning rod from the muzzle end? I guess I would go through several mops at a time? It must be pretty tough to get the barrel out if Gregor does it that way?

Just hoping some of you guys that have them will share your barrel cleaning with us?

OK, just found this video Dana did with his SK-19. Thanks Dana

Any of you Huben owners got anything similar?
•••
Upvote 0
C

I started to do something like Dana's, but never can get the magazine to spin as freely as it did before I sent it in to LCS for a air leak and jam.

I do it like this because to me taking it to a certain mark on the tube is sometimes a tad too tight or loose. So I tend to do like AOA.

@hhealthservices , Thanks so much for that video. I don't know how I miss all these videos in my searches. I knew you guys would lead me in the right direction.

I've also hear the .25 SK's give less trouble than the .22 cal SK's anyone have an opinion on that? Just trying to do my homework! LOL

OK, found an old Gregor video on removing the barrel in the Huben. It's 4 yrs old, so don't know if anything has changed for 2020? Looks like the barrel removal for the Huben will be more complicated?

The huben and the sk19 work almost exactly the same, and have very similar parts. The sk barrel is easier to remove and install.

It shoots the redesigned jsb perfectly. Slugs have been a challenge for getting good accuracy. I've tried a lot of slugs and the best results with the NSA.

The sk19 barrel is super easy to clean, it's a lother walter choked rifled barrel (Not a polygon, not sure where that rumor started) It doesn't get dirty very fast. Taking the barrel off to clean it, putting it back together and adjusting it has some folks rattled.

The barrel is the main structural piece of the sk, and it only takes a 16th or so of a turn from bottom to be adjusted properly. A lot of folks mark the barrel to get it back to where it was, I didnt.

I dont recommend trying to adjust barrel in a working stand cause it binds the parts when tightening things back together.

To be honest the sk19 can suck if things are not adjusted properly. I almost sent it back to get a refund. AFTER I chilled out I learned a few things.

I've had jams that shear the pellet in half and lock up the cylinder, blows every once of air out if the gun and tank in a flash. Also had the barrel free but the cylinder would not rotate. Had where the skirts of the pellets get damaged when rotating in the cylinder (easy fix). All these problems happened in the first two days of owning the sk, since Ive take the gun apart numerous times for cleaning or modifying and zero issues.

If any sk19 owners run into these problems feel free to contact me... I've thought about making a write up or video on adjusting the sk and some tricks I've learned . Still might.

Once you learn things about it and know how to adjust it the gun is very enjoyable and doesnt give you problems.

The learning curve and lack of support other than AOA (which AOA has been great) is what give this gun a bad wrap. I think LCS should release how to videos and part diagrams to help folks out and would keep from people sending them back to be fixed.
Reactions: tpk1975, kirkb and CampFussell
•••
Upvote 0

Thanks for all the great advice Off_target. Sent a green ball your way.

Trying to get all the info I can before I make the leap this coming summer. Made it a year without buying an airgun and then bought two right before Christmas. Don't really want to thin the herd to get the next one, so I need to pace myself.

With your excellent analysis and Dana's and AOA's video I'm pretty set on cleaning the SK-19 barrel now. More videos and parts diagrams would be icing on the cake.

I should mention that I did also own an SK-19 in .25. The first gun I got leaked air out of the box. It went back to AoA but still leaked. AoA replaced the gun and it performed perfectly, but the form/ergonomics of the gun were too much for my small stature, so I sold it and went to the Hubens. As far as I can tell, the barrel removal on the Huben K1 is more complicated than the SK, but a trade-off I was willing to make. On any of the semi auto guns, be sure to seat the pellets forward in the mag with a small hex key or similar tool, to prevent the pellets in the mag from backing out of the mag while firing and jamming up the gun. 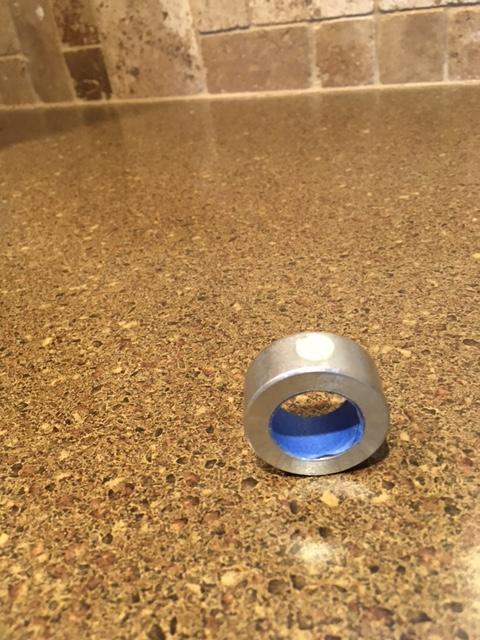 The Huben is much more involved in re-aligning the barrel once removed with the magazine.
•••
Upvote 0

Wow, thanks man. If I hadn't already sent ya a green ball, I'd send you another one! LOL

That's a nifty idea. I really want a Huben but with all the neat tricks I've learned from you guys with barrel removal on the SK, it's looking more like an SK unless Huben comes out with a better barrel change modification? I had my heart set on a Huben for the compactness of it , but I gotta get to that barrel easier.

I don't hunt, and we pretty much always shoot benched here in the backyard, so the bigger SK shouldn't be any problems. I do hear the Huben has a little better trigger, is quieter, better detent, etc, but I gotta think ahead on the barrel cleaning.

Hopefully someone will give a us a great idea with cleaning the Huben barrels like you did with the collar on the SK. I'm still wanting it mostly for the 18 grain JSB's, but if folks are having better luck with the 25 cal in either the Huben or SK giving less trouble I might lean in that direction?

Sure do appreciate all the good schooling I'm getting here guys.

If you get the SK. PM me your address and I'll send you the tool to keep, and I'll pay the shipping-carl
•••
Upvote 0

If you get the SK. PM me your address and I'll send you the tool to keep, and I'll pay the shipping-carl
Click to expand...

I do believe that with a little more thought, I will have a similarly simple solution for the Huben K1’s.
Reactions: kirkb
•••
Upvote 0

I do believe that with a little more thought, I will have a similarly simple solution for the Huben K1’s.
Click to expand...

You'll have to make me a video titled "Huben for dummies" ;-)