Purchased an unfinished (no stippling) Walnut stock for my RAW HM1000x LRT last November. Martin wasn't able to ship it until March '22 and I've been kinda working it off and on now for 3 months. For $595 (not including shipping), the stock didn't contain any fancy grain structure (soft wood) and had filled knot holes on the pistol grip.

I always wanted an original RAW stock made pre-Airforce, having wings around the manometer; however it seemed overpriced in its unfinished state.

Have finished sanding down to 1200 grit paper and she's starting to look nice. Was going to leave the pistol grip un-stippled until I noticed the end-grain on the grip just didn't look nice enough to leave uncovered. Watched some stippling videos and bought a $9.99 HF mini-moto took using diamond bits. Only wanted to stipple the hand grip area of the pistol grip, so left more un-stippled than on OEM RAW's.

Not sure if I want to hit it with a light coat of walnut stain or not to give it a dark complexion, but will go with numerous coats of tongue oil.
Should have it finished sanded later today - still have some tough end grain a minor dents to remove. 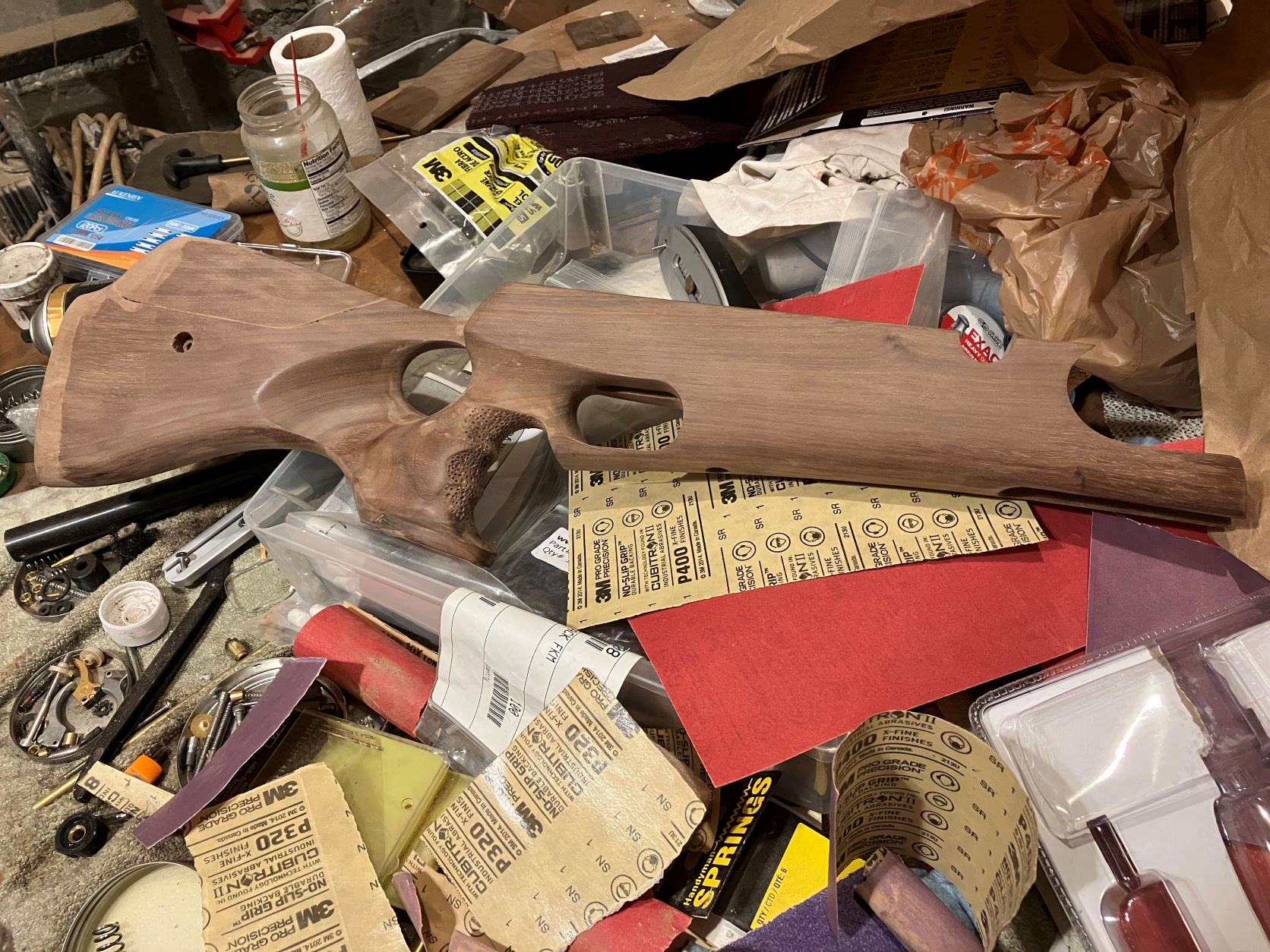 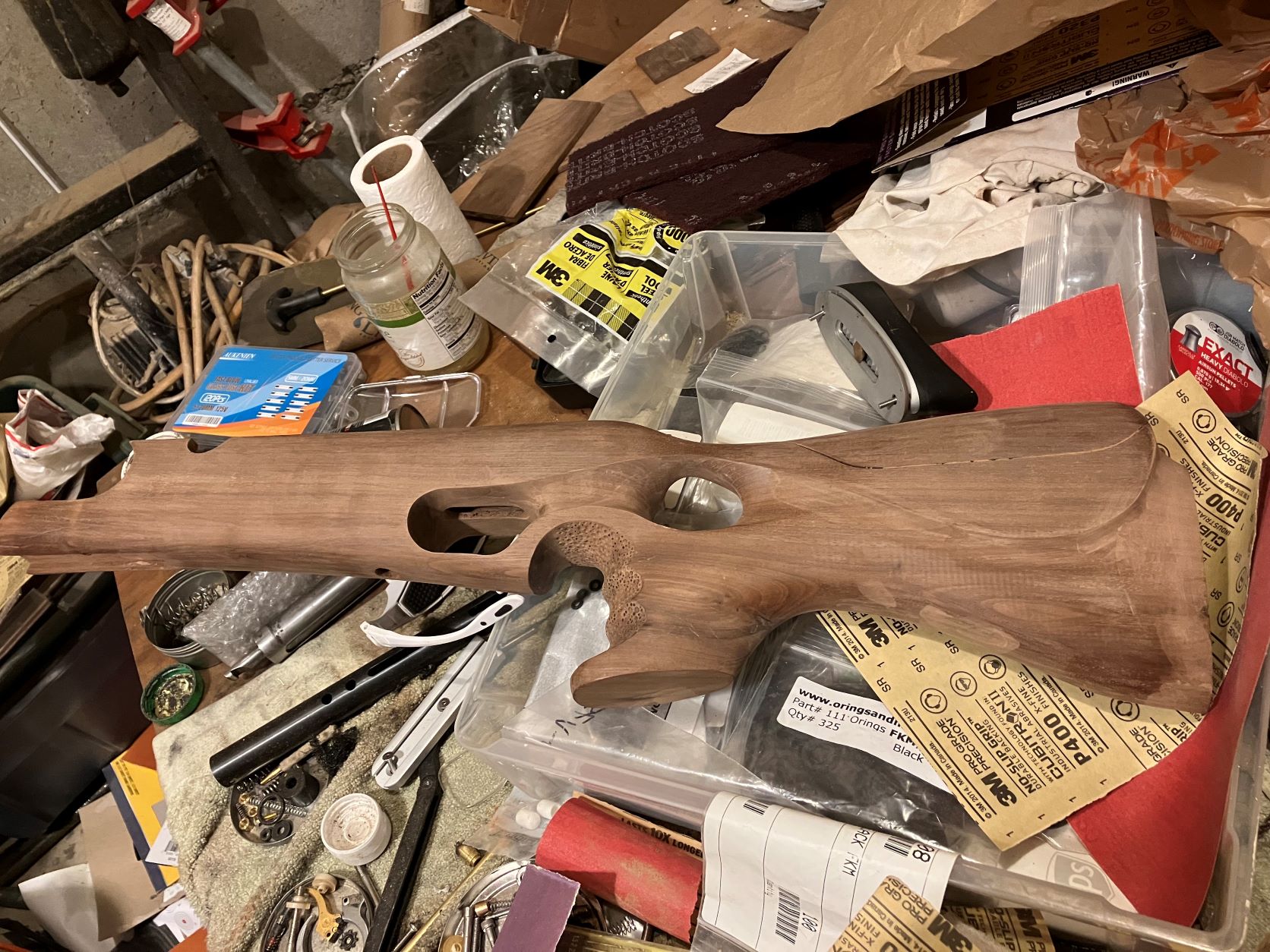 There is no need to sand it that fine. Actually 320 is as fine as I would go because you want some tooth in the wood for the finish to adhere to. If you sand it too fine then you risk poorer adhesion. As far as finish consider Sutherland Welles “hard sealer” or True Oil. You can seal it or completely finish it with Hard Sealer or top coat it with Sutherland Welles UR 500 depending on the gloss level that you want?

Underneath the comb area are some vertical marks. Are those CNC tooling marks or curl in the wood? I can’t tell in the photo.
Reactions: Lotte
•••
Upvote 0

Yeah igol,
The comb area has tiger stripping grain, this appears on the (same side) forearm too - almost looks like a mill mark (I don't like it).

I've used everything from linspeed oil, Tru-oil, tongue oils and many poly finishes on various gun stocks. The tongue oil actually soaks into the grain to become part of the wood much like True-oil, but doesn't impart any amber tint to the stock. Ultimately, I want the stock to have a deep, satin finish which could take a few coats with light sanding in-between. Still deciding if I want to stain it darker.

The wood being finished like glass doesn't prevent the soaking process with walnut, however, it may take longer to penetrate.
•••
Upvote 0
I

I really like Sutherland Welles products. They just made smaller sample sizes available so I’d encourage you to look into it and perhaps try it, even if it’s on some walnut scraps. They had some nice video tutorials on their website where you can see application techniques and end results which may appeal to you? They use dicitrisol solvent which has a much better aroma than naphtha solvent based products.

Back to sanding. You can actually burnish and close the open grain wood cells which will impede penetration by sanding bare wood with too fine of sandpaper.
Reactions: Lotte
•••
Upvote 0 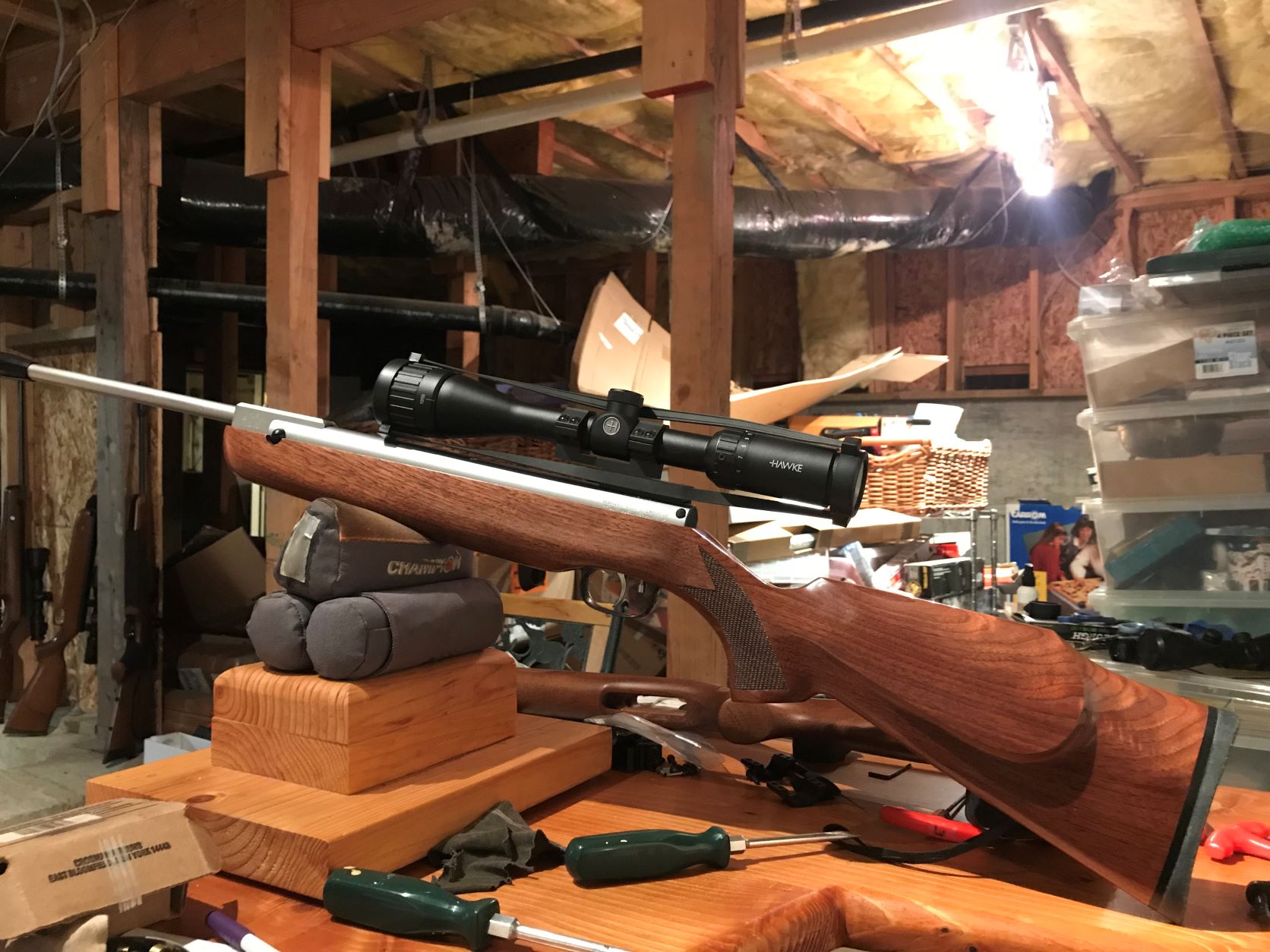 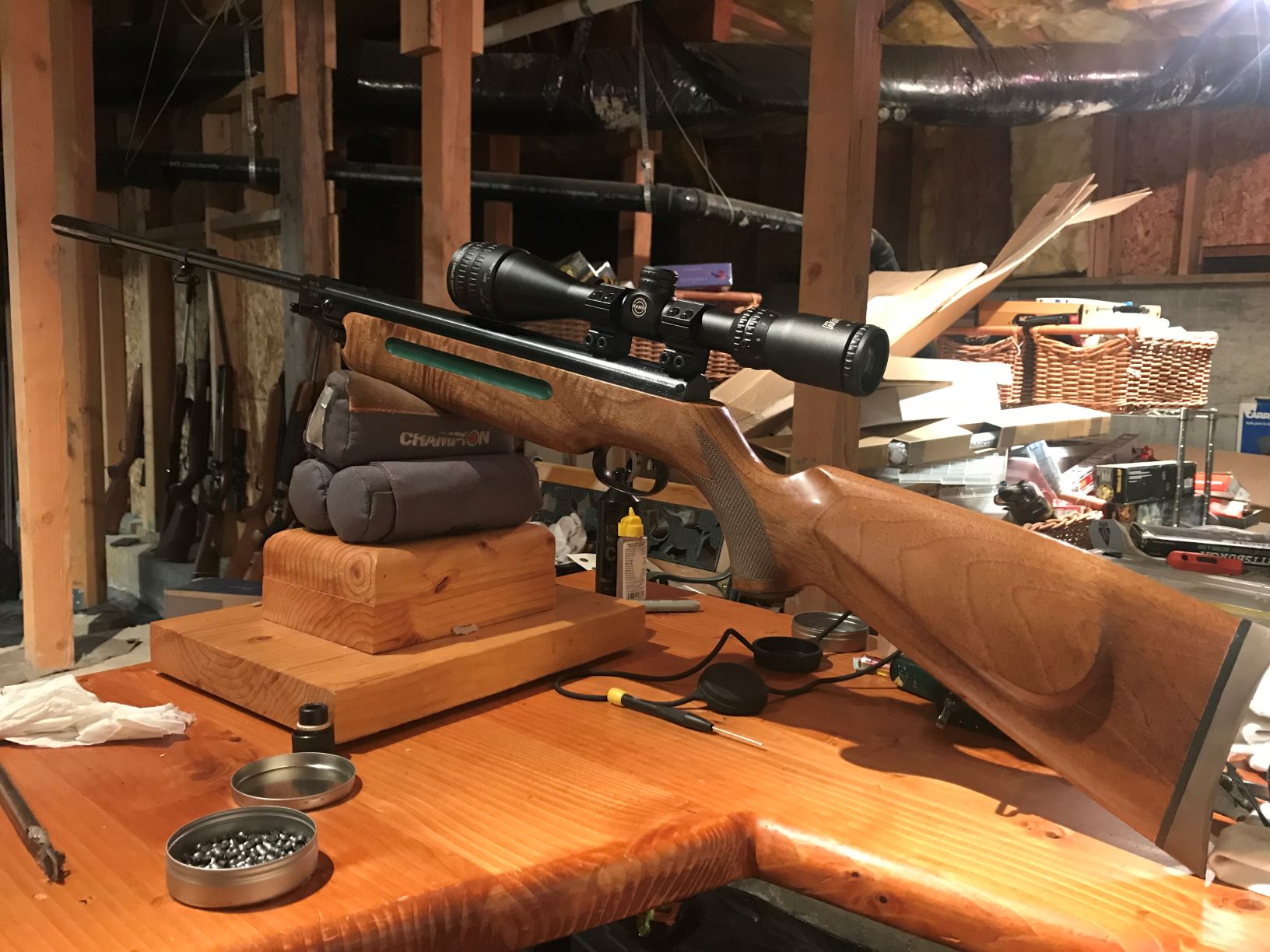 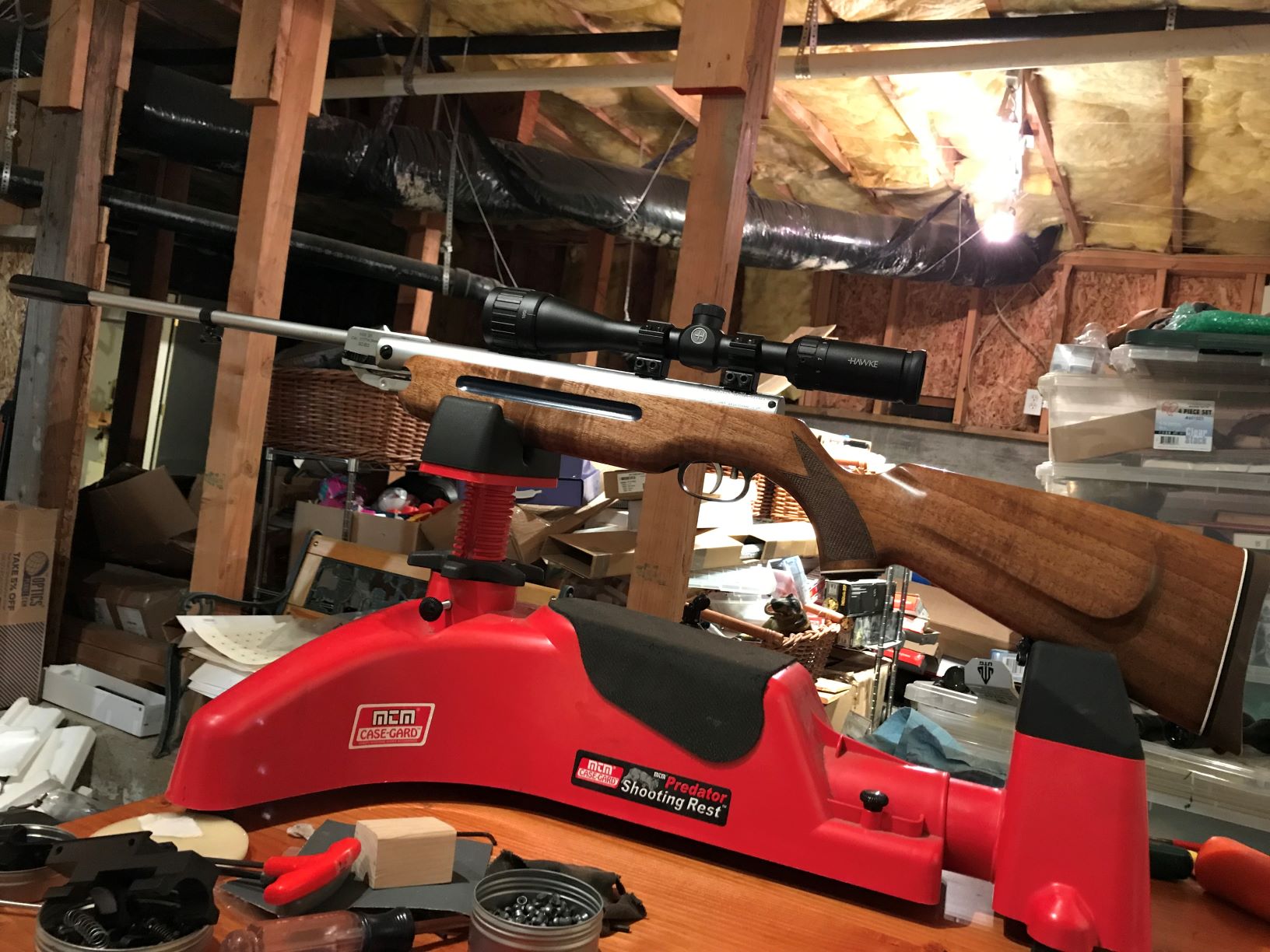 I would like to share some advice on a next step you might want to consider. I finished and refinished quite a few stocks. And I’ve been an avid woodworker my entire life since junior high.

The number one thing I learned at a very young age is that you can’t progress to the next grit of sandpaper until all the imperfections are removed including the sanding marks left by the previous grit.

This is going to sound crazy, but I highly recommend it. Take your sock into the kitchen or a washroom, I usually do it in the kitchen because I have better lighting. Turn on the Fossett, hot only, let it run until it’s really hot. Grab a fairly course towel like a hand towel. Get it soaked with the hot water and wipe the entire stock down hard. you want the stock sopping wet.

Let it dry. I usually put it in front of the vent for a couple hours, move it around so it dries evenly.

Based upon your picture, I would start out at 100 grit after it dries. If any dents aren’t quickly disappearing with 100 grit you can go back to 80.

After you finish with 100. You should have no dents or scratches of any kind other than 100 grit sandpaper marks. Then do the same thing wipe it down with hit water you will raise the grain again.

Then move onto the next grit after it dries.

When you get to the last highest grade of sandpaper which it sounds like for you is 1200, which by the way is very high, then you keep it dry. It’s actually called polishing the wood at the end.

The neat thing about putting the water on, if you can see how it looks when you’re going to be finished with it. Especially when it’s very wet.

I would agree with the comment above about the sandpaper I would go to 600 grit. If you go higher, you should apply the first coat with sandpaper to make sure it gets in the grain.

I definitely would not stain the wood any darker until I see what it looks like wet. Just putting oil on will make it much darker.

I love working with True Oil, there are some tricks

Here is an example:
Mike

Thanks Mike,
Yes, I have already soaked it under water to raise the grain and see the stock color, that's why I was somewhat underwhelmed by the wood quality for $600.
I erroniously mentioned being at 1200 grit paper, I'm currently between 320/400 on the paper and not up to 1200 - where I intend to go.

Now that's the kind of fancy grain I'd love to see (a little at least) in my stock.
Reactions: mubhaur
•••
Upvote 0
I

Its really unnecessary to soak wood to raise the grain. We go to great lengths to air dry or kiln dry wood to an acceptable level (6-8% MC) before working it and inducing excess water back into wood can be harmful as the wood reacts to excessive moisture it can swell, move and even surface check depending on how it was dried and stress relived during the drying process? After the drying process wood will absorb or release water with the atmosphere as it seeks equilibrium with its surroundings. Inducing excess water beyond its equilibrium can cause the wood to move in adverse ways.

After the final course of sanding you only need to wipe the wood's surface with a damp (not sopping wet) rag, allow the grain to raise for 20 minutes, then knock the fuzz off the surface with the same grit of paper. Allow 24-48 hours to thoroughly dry then apply your choice of finish. If you do excessively wet the wood, then rush into the finish application, you risk trapping moisture under the finish which can cause blushing, improper penetration's or surface delamination depending upon the type of finish used.

Lacquer or shellac are the only two products that do not require sanding between coats as the finish will burn (or melt) into previous layers. Most other modern finishes require mechanical abrading to provide enough "tooth" required for proper adhesion between coats.
Reactions: Mr.H
•••
Upvote 0

I will admit I don’t soak, I wipe. And for final coats I would use much less water. Also, all of my blanks have air dried for years and years.

BTW, I did the same thing with a stock from Martin years ago.
Mike
•••
Upvote 0

Vetmx said:
I just can’t wait to see it when it’s done. No matter how you get there.
Click to expand...

Yeah, sometimes we get caught up in process. I think most of us old timers pretty much do it the same way or at least get to the same point (results) in the end. Again, I appreciate every ones comments, hopefully the stock will look like a more subtle version of the RAW OEM stock in walnut.
•••
Upvote 0
I

SpiralGroove, I hope you didn’t take my posts the wrong way or as bossy and belligerent? I was merely trying to share some 40+ years of wisdom as a professional sawdust maker. I’ll send you a PM to explain.
•••
Upvote 0

Actually different opinions are very educational. Especially when they don’t come from a student of Google University. I enjoy seeing how people arrive at the same conclusion by taking different routes. As long as it doesn’t get ugly.
Reactions: Flintsack and JW652
•••
Upvote 0

Hey guys,
I got Covid at work on Monday, which has been a nusince. On the positive side, now that I'm feeling better - stock sanding has been my only daily activity in quarantine.
Jezz is quarantine boring..... but has giving me the time to finish my RAW stock properly

Anyway, should be able to stain later tonight and tung oil tomorrow.
I will post pics as the stock comes together

Sorry to hear you got Covid. It’s no fun. We are looking forward to seeing your progress and finished results.
•••
Upvote 0

Most pre-Airforce, RAW OEM stocks I've seen have pretty plain grain in their forearm area which didn't look great with a light coloring. I wanted something a bit darker and rich.

Long story short, the Walnut Martin uses is very soft and absorbant, hence my stock drank up the stain very fast and now appears too dark. I had expected this but only about 75% ... Parts of the stock will need to be hit wth mineral spirits in an attempt to lighten roughly 25%.
•••
Upvote 0
S

One thing about those wings are that they are pretty thin, the wings on my Gen1 HM1000x might snap off one day... (Had to thin them out for the carbon fiber bottle clearance.) I do wish that I had the adjustable cheekpiece but don't think it was an option when it was ordered.

Not very up to date on Walnut stains but would have more input if it was a maple, I like the reddish/brown underneath to make the wood pop. For finish, I'm not a fan of the poly finishes but have some Permalyn laying around, and much prefer a traditional oil finish like Jim Chambers #FK-F.
•••
Upvote 0

You know what Kirkle, I think it's going to be just fine. Not the most eye popping grain as you mentioned but I sense that once you get some finish on it, it will warm up and start showing what it DOES have. I've seen your finish work and you have done very fine finishing. What it comes down to is using what works for YOU. Looking forward to seeing it complete

I'm a retired woodshop teacher. Follow I golfa8 advice. His is the best.
Also never flood water on wood unless it's on fire. Raising graining grain is done with a amp cloth. Like golfa8 says shellac and laquer melt each coat and are excellent. Theoben used epoxy because it's the only finish resistant to DEET the repellant in insect sprays. Epoxy is diddicult to repair however. West System sells the best epoxy finishes.
Mr. Macarri's Royal London Oli is wonderful if you decide to go with oil.
Reactions: Mr.H and Sc0-
•••
Upvote 0
You must log in or register to reply here.
Share:
Facebook Twitter Reddit Pinterest Tumblr WhatsApp Email Share Link
Top Bottom
Forums
Calendar
Members
Watch
Menu