I was toying with the idea of trying HFT so I reconfigured my Crown for it, even got it shoot really quite well and pretty excited about it. Then one day I saw a thread from Mike at Thomas rifles about new dealers/gun smith, one of them being @motorhead who happens to live just 3 exists away from me. Thomas to me has always been the cream of crop when it comes to FT guns and has famously long wait. Then @motorhead started a thread about him starting as a Thomas dealer and he happened to have 1 full kit, my impassiveness kicked so in told Scott to put my name on it. Long story short and 2 weeks later I picked it up last night and I am just ecstatic!

The gun is simply awesome with every single detail superbly engineered and more adjustment than I can list on 2 hands! I'll let the picture do the talking since I don't even have it setup to me and don't even have the correct rings on. 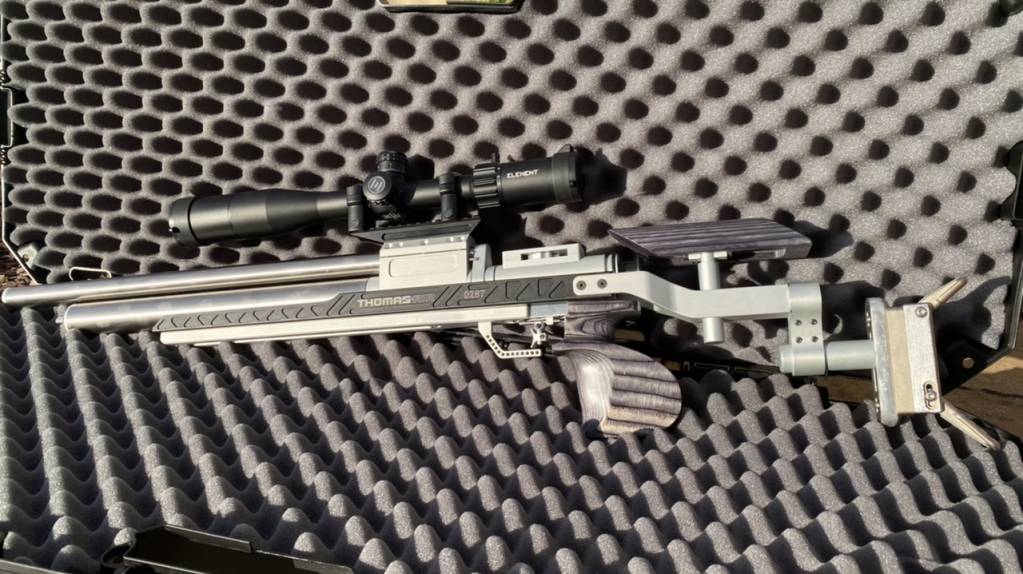 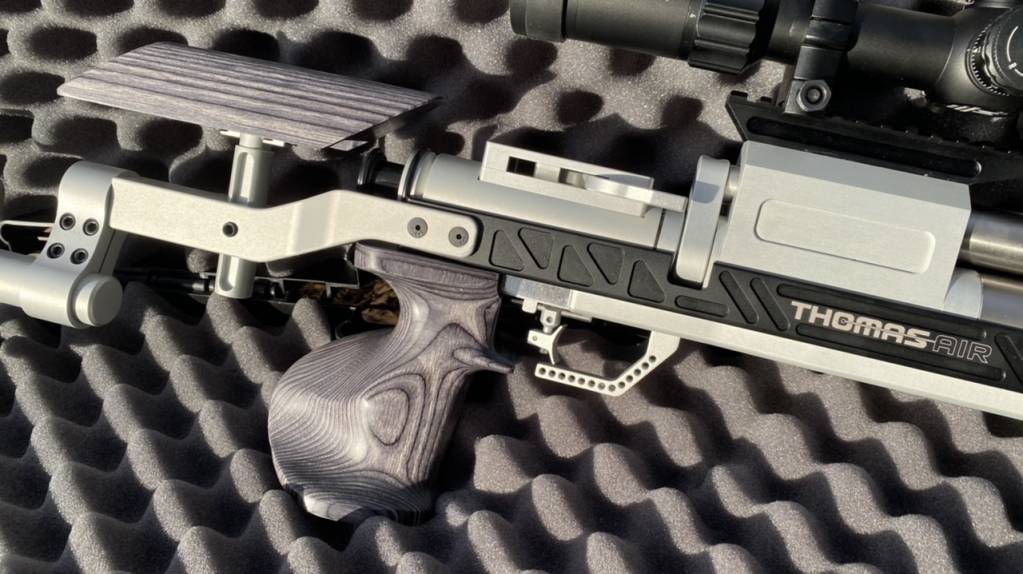 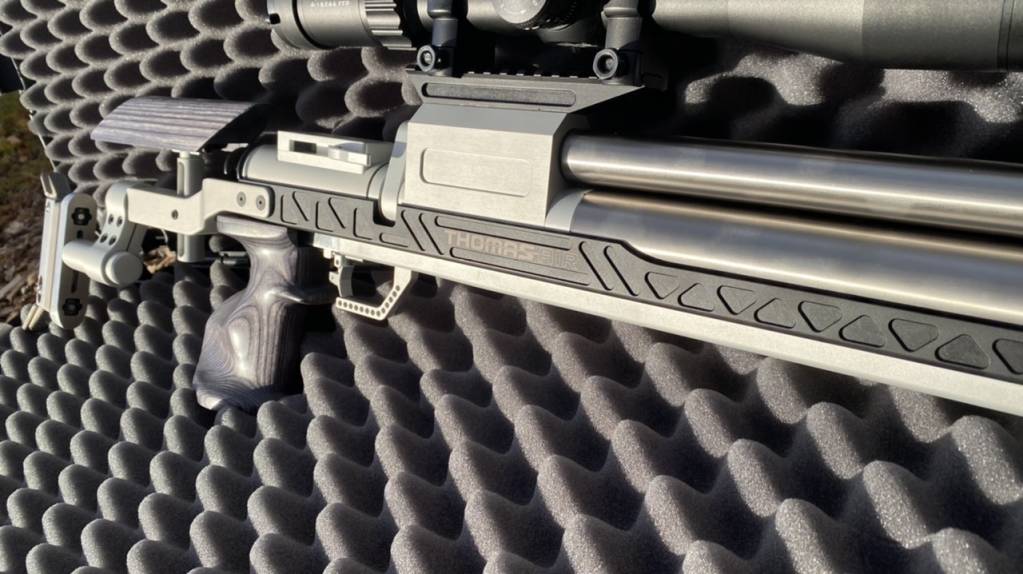 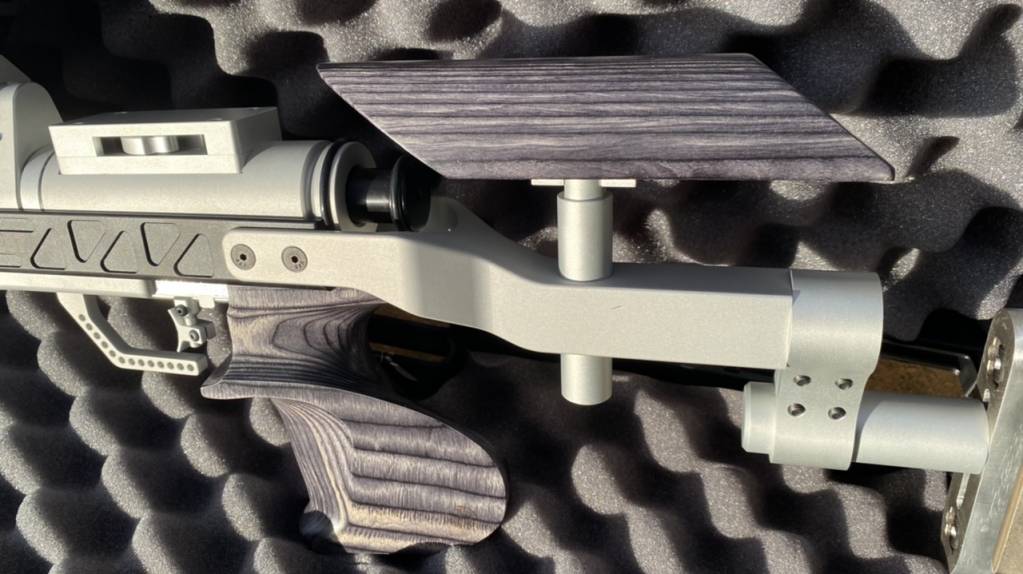 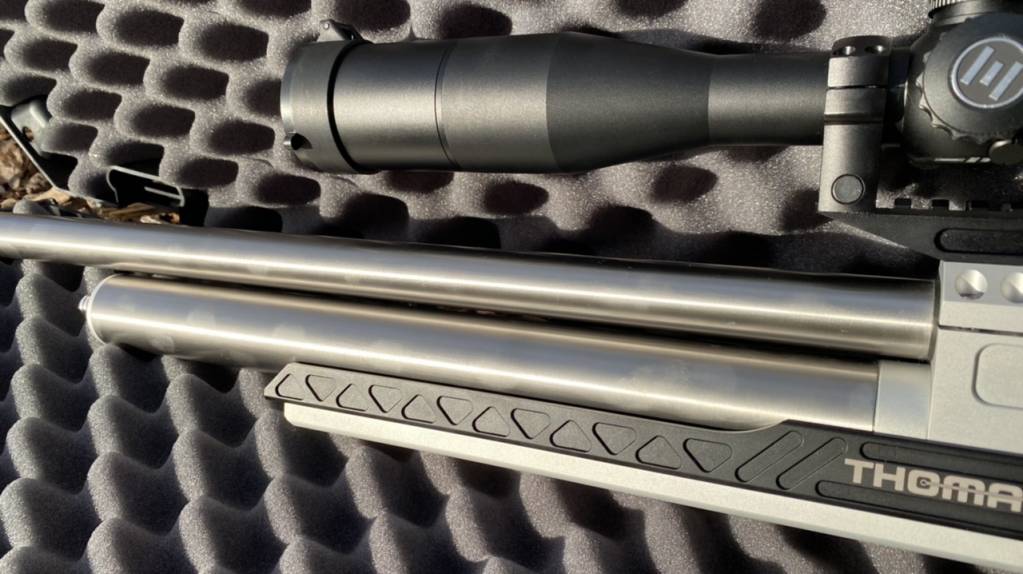 Scott aka @motorhead shot this group at 25 yards off of shooting sticks HFT style before I picked up the gun. Obviously it’s accurate so I can look really good holding the gun at the match, I can always blame unsorted pellets! 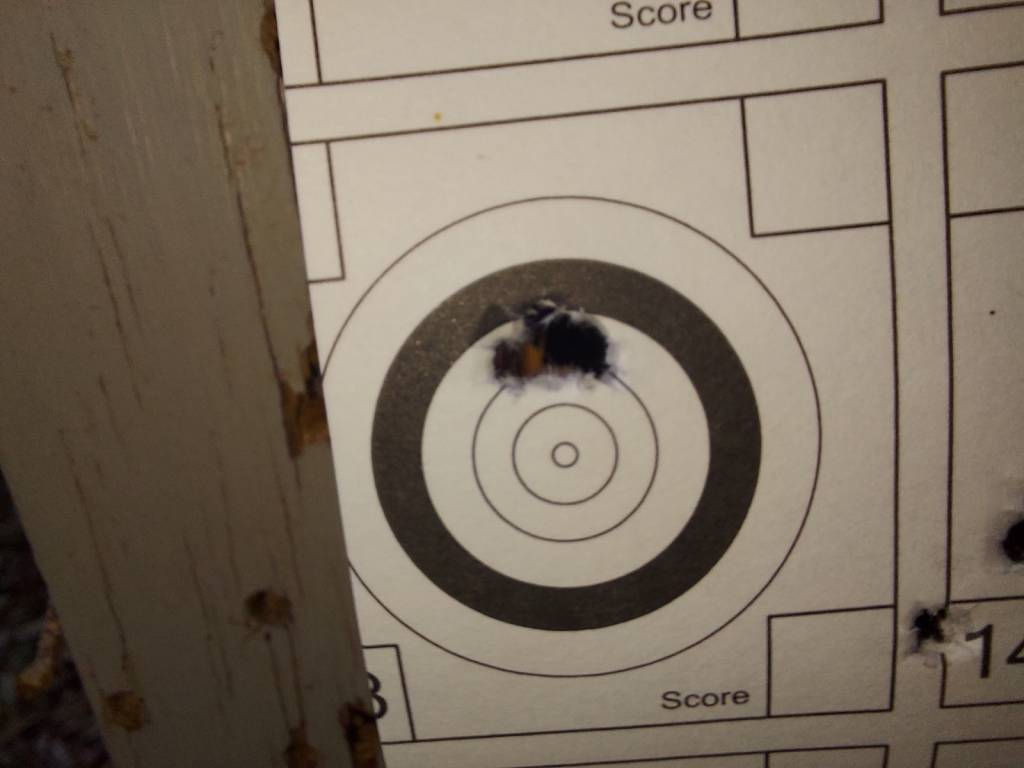 Edit: I have decided a name for my Thomas, since it’s black and white I’ll call it Pepe Le Pew! Also because it would start to stink real bad when I start shootings it! LOL!

Pepe got all dressed up for tomorrow’s FT club match. The Rowan hamster made it from UK just in time and the shelf is 3D printed trying out the shape, I might for for the rubber toilet plunger later 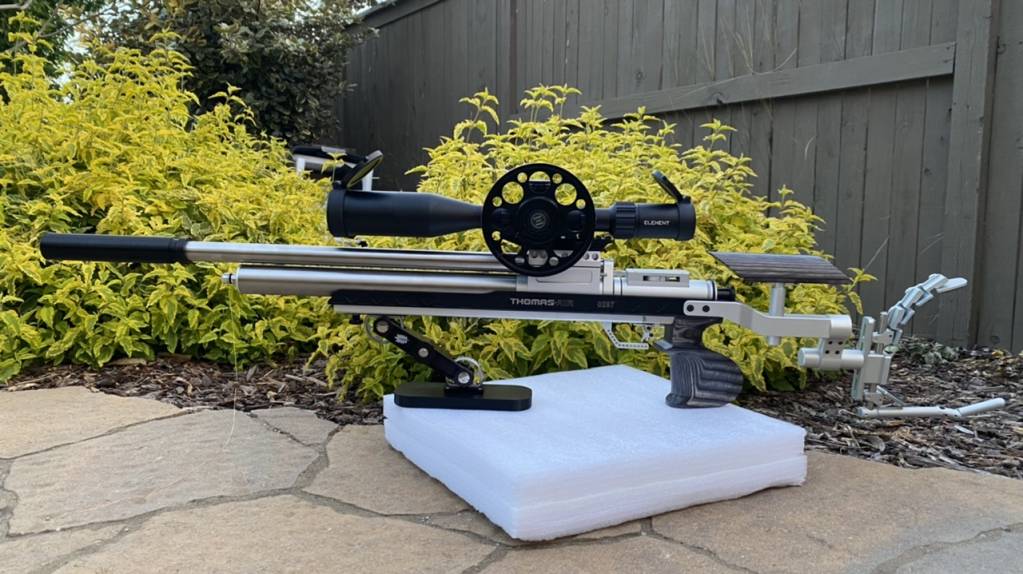 the moderator is 3D printed and just slips onto the shroud, works well enough for me to do some stealth FT practice in the back yard. 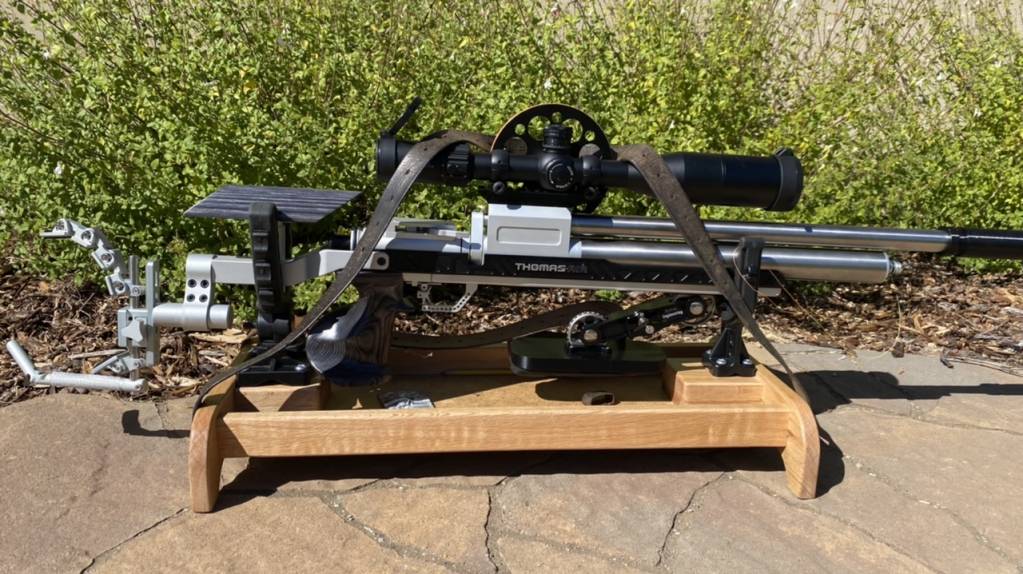 Wowza!!! What a rig! Congratulations on your new Thomas.
•••
Upvote 0

So nice! There's a couple fellas with the Thomas guns where I've been shooting this winter. They've kindly offered to let me try but I politely decline, because I know what will happen next. Another hole in head...like you said!

Congrats to you and hope you enjoy.
•••
Upvote 0

Hey @qball. You can’t can’t show up and not place with that rig. It’s should win some type of an award just based on the look. That’s a beautiful tool. Second one I’ve seen like it within the past week.
•••
Upvote 0
B

Hey @qball. You can’t can’t show up and not place with that rig. It’s should win some type of an award just based on the look. That’s a beautiful tool. Second one I’ve seen like it within the past week.
Click to expand...

of course I’ll place, I might place last but that still is a place right? LOL!


I’ve played golf for a few years a long while back and yup, I know how to look good! Hahahaha
•••
Upvote 0

Hole in the head?

I think some of us have replaced the parietal of their skull with a sieve....

I'm not there yet. Still trying to plug mine....

Naw, I think it was plugged up with $$$$,the Great thing about that is you now have the"best" and never can top it,so no more thinking about getting the best,That time saved is more time for enjoyment...so in your case money well spent for a TOL airgun...well that is what I tell myself.

I love the machine work,you did good, and congratulations.
•••
Upvote 0

That's beautiful! What does your rig weigh now?
•••
Upvote 0
S

Awesome man!! I was about to post mine too, and I'm torn. Not sure if I should start another thread, or piggy back off yours. I'll start another, so as not to take away from yours, but if moderators prefer to merge them, it won't break my heart.

I love that these guys are able to get these rifles into our hands a little quicker, and that we can have someone local to help us out.

That's beautiful! What does your rig weigh now?
Click to expand...

Sadly it’s too loud to shoot in the yard so haven’t shot it since I got the gun. Finally made it to the range with it today, shockingly the wind isn’t bad and even got dead calm air for brief moment here and there. Zeroed it at 25 yards, the gun has zero issues throwing pellets through the same hole of the wind is calm. Got bore rather quick so moved the target to 50 yards and if I do my part the pellet holes will at least touch. my chrono was acting up but when it worked for a bit I was getting 915fps with JSB 10.3 grain heavy, ES was under 10.


Feeling pretty good I busted out the shooting sticks and stool trying out HFT style shooting. Tried a bunch of positions and hold but wasnt able to get rock steady like on the bench and still see my heart beat so need to do more research on how to improve. But it was good enough for me to range and hit random pebbles. Toward the end I was fairly successful at hitting 9mm casings I put on top of 50 yard target. This is pretty fun!
•••
Upvote 0
S

Cool rifle that Pepe is!

Not hard to hit those 9mm casings is it?! These Thomas FT's really put em in there.
•••
Upvote 0

the grip and cheek rest are laminate from Steve Corcoran, is that different than before? Sorry, new to Thomas.

Cool rifle that Pepe is!

Not hard to hit those 9mm casings is it?! These Thomas FT's really put em in there.
Click to expand...

Well, when it’s on the bench it’s pretty darn easy. But with me on shooting sticks and crappy camping stool it wasn’t as easy.

I really need to get upgrade my stool, also my shooting sticks are possibly too long but will find out next sunday. I’m new to all of this so definitely a lot to learn, that’s the fun part. 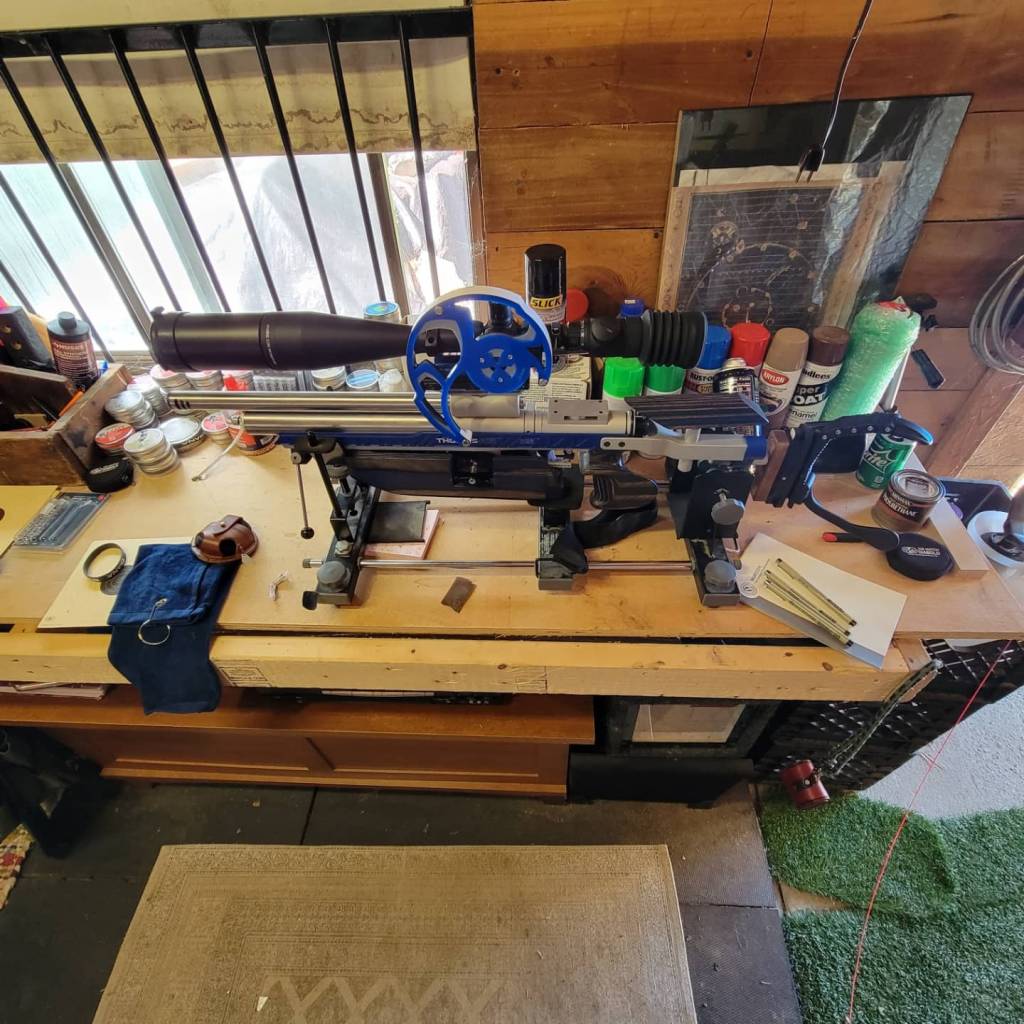 They not only come with, but can also give wood.
Click to expand...