Hey guys, I just wanted to share my Maverick details, now that I've finally got it about where I want it. The camo is the Mossy Oak Obsession shotgun wrap. It took me a couple of hours with a hair dryer and a very sharp knife, but I think it turned out pretty well. I camo'd it out of function, and not for looks. In GA you can use a .30 and up air gun to hunt whitetail deer and Turkey(definitely need the camo for that one). I've also done a bit of tuning to it, so it can sling that heavy lead better It started life as a Compact .30, but that didn't last very long. Here's a breakdown of the modifications I've done so far:

I think that about covers the modifications list. I spent a couple of weeks just tuning, before I ever put it on a target. It has turned out to be a LASER in all calibers with the right ammo! In .177 power tops out at 53 fpe, but it usually lives in the 45fpe range shooting 22 grain Griffin Slugs. In .22 the power tops out at 84 fpe with cast 35.2 grain slugs. That was just to see what the upper limit was. It usually lives in the 65-70 fpe range shooting the NSA 31.2 grain slugs in .218. It is creepy accurate with those NSAs! I've even managed to bust a few eggs at 250 yards The .30 caliber tops out at 130 fpe with the NSA 65.5 grain slugs. It is a hammer with those, but I haven't done a ton of testing them yet. It usually gets shot with the 54.5 grain NSAs, and is very accurate shooting them around 950 fps. I've made some pretty darn long shots on cans and various other stuff with them too. I didn't mod it for power, just to say I did. I'm a hunter first, and I often go after larger critters, so the more power potential the better! Anyway, that's the rundown on performance so far.

I have to say, the Maverick has turned out to be a very solid performer for me so far. Needless to say, I'm very happy I took the jump with it. I've never been an FX guy(not that I had a problem with them). I've always taken less expensive guns, and modded them to be what I wanted. When the Maverick was announced, I knew I needed that gun. The dual regs and 89cc plenum were calling to me. It wasn't as expensive as the Impact, and little simpler too. There was finally a gun with enough plenum that I could make some serious power with, and I had to have it. I have this disease, where I can't leave anything alone. Think Tim The Toolman. Even though the Maverick is the most expensive air gun I've ever bought, it's fate was no different. I had it in pieces the day I got it

I went through it thoroughly, and tried to identify where I could make improvements and stop any potential future issues. On that note, I think the first things I would recommend on the Maverick are a bit of loctite on the grub screws that connect the side lever linkage to the cocking rod. I would also recommend a wee bit on the micro adjustment tension screw. Other than that, it is a darn solid gun with strong power right out of the box, assuming you have the correct hammer weight in it. I'm super stoked about how this gun has turned out with performance and accuracy, and I just had to share! Feel free to ask me anything you want about the numbers/mods etc.. Thanks for reading! 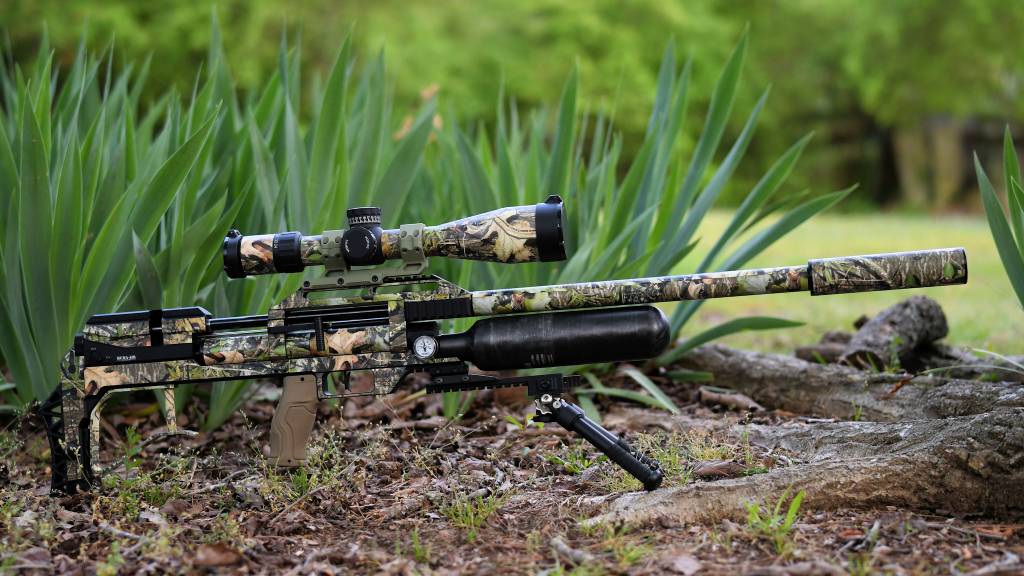 I too just got my Maverick .30 in compact. I also have the same general idea, which is to turn it into a sniper style slug slinger.

Unlike the OP, I'm not a do it yourself kinda guy (time thing). So OP's post is very helpful; but it also tells me I need to send my baby Maverick to someone who can make the necessary changes and transformation into a grown up slug slinging hole plugging knock down beast airgun for me.

Who is the best resource to use for this process ? Who is doing this for a living and has great credibility and skill? I definitely don't have the time to be a guinea pig.

@rallyshark - what was the reason you chose the 480cc bottle over the 580cc ?

I'm aware that the compact maverick, in its current configuration, will not let me fit a larger bottle because it will interfere with a moderator.
•••
Upvote 0

Wow you are making more power than a m3 now everyone will want a maverick again!

Thanks so much for the kind words guys! It has been a bit of a journey getting the gun to where it is now. Now that it's there, I'm loving every second of it Cavedweller, I got a deal on the 480cc bottle, so it was probably $100 cheaper for me vs the 580cc at the time. It just came down to saving a little money. The same thing was the case with my bag rider. It cost me about $10 in parts to make that myself. I used some 3/4 x 1/8 aluminum from Ace Hardware and a long M5 bolt. I used the rear stock hole, and a discarded section of an old .22 barrel for the spacer. The good part is, I didn't modify the gun in any way to mount that bag rider. The costs add up quick when you're getting more barrels etc., so I tried to save money wherever possible.
•••
Upvote 0

Really nice job, and sounds like it is going to be a great performer!
•••
Upvote 0

Wow you are making more power than a m3 now everyone will want a maverick again!

I was just watching a video of the crazy power the M3 can make, and I thought the same thing. Yes, the M3 was making great power, but the Maverick can do it too, and for less money. Don't get me wrong, the M3 is pretty darn cool, but I personally feel no need to get it. I don't say that to brag at all, but rather to emphasize to people that you don't have to rush to dump your gun to get an M3 to hit those power numbers. Likely, you only need to spend a little time on your gun to get the power(and results) you want in most cases I mean, we've seen countless MKIIs beating those numbers as well.
•••
Upvote 0

Thanks for the words of encouragement Bigragu! It's always a process of making little improvements along the way for sure. I'm slowly getting acclimated to the AGN forums. I emphasize the "slowly" part, lol. I'm not out of ideas on my Maverick, but I'm not ready to put those mods into action yet. I'm enjoying the gun so much at the moment, I don't want to mess with a good thing! The Maverick is turning out to be everything I thought it could be(non MOA rail aside). Who knows, I may try to beat my current longest air gun shot with it at some point. That will require some different scope mounts to beat 400 yards, so I'm in no rush to pull that one off just yet. I do think the gun is accurate enough to do though

Beautiful gun! Love the mods. I too bought a Maverick (.25) recently and for a lot of the same reasons you did. I really want to see what kind of long range accuracy I can get out of it. I too will be following this thread.
•••
Upvote 0

One of the guys I shoot with has a Maverick in .25, and it does great at long range. Last time we shot, he was popping cans at 200 yards with it. His hasn't been modded like mine, and he's hitting 80 fpe with it and heavy slugs without too much effort. His .25 definitely has the accuracy to shoot longer shots, but he doesn't have the range in his scope to shoot farther yet. Now that we know a lot of the Mavericks do NOT actually have a 20 MOA rail on them. I forgot to mention it, but I had to shim the rear of my rail to get the extra elevation I needed for the long range stuff. With a 20 MOA scope mount and the shimmed rail, I can dial up to about a 275 yard zero now. With reticle holdover and the longer zero, I can probably push it to 350-375 yards, tops. I hear FX is working on getting the 20 MOA rails out to people, fwiw.
•••
Upvote 0
You must log in or register to reply here.
Share:
Facebook Twitter Reddit Pinterest Tumblr WhatsApp Email Share Link
Top Bottom
Forums
Calendar
Members
Watch
Menu