(Excerpt from my CD (“Old Air Guns and Memories”)​
Hello to all;

This Air Gun I am going to evaluate is a unit I added to my collection a while back, a Benjamin Model 362 CO2 Rifle .22 caliber (made approximately 1956-1969). I had been looking for one of these units for sometime and while I had came across several they were in such poor condition I passed on each, however this unit was in remarkable condition and all parts were there including the Bar-V Sheave sight, which as best I can tell, immerged on the 1959 production Rifles. The Benjamin 362 also had available as an option a deluxe Walnut stock which had an extended forearm, the unit I have has the shorter or regular forearm. They were advertised as the “Benjamin Super CO2 gas Carbine” with 2-stage High-Low Jet power (Two bolt cocking positions). Mine weighed 4.5 lbs. and was 34.5 inches long, a really light compact unit!

They were stated as capable of up to 40 shots per CO2 cartridge. Accuracy was given as one inch at 10 –15 yards. All of the Benjamin CO2 Air Guns of that era utilized the 8 gram disposable CO2 cartridges as opposed to the Crosman Air Guns, which after they dropped the rechargeable bottle system, utilized the 12 gram CO2 cartridges and this remained throughout the production era, each company wanting to differentiate their products.

The rifle was charged with CO2 by unscrewing the forearm plug, and inserting a 8 gram CO2 cartridge small neck first, reinstalling the (o-ring sealed) forearm plug and screwing in until snug by hand, the bolt was then cocked engaging the sear, (make sure the rifle is not loaded) point the rifle downrange pull the trigger releasing the striker which will pierce CO2 cartridge, the rifle is now charged and ready to load and shoot.

The Benjamin CO2 rifles were offered in .177 cal. (Model 367), .22 cal. (Model 362) and BB caliber (Model 360). The rifles were equipped with a rather simple safety, after cocking in either low or high power position the safety would be pushed down thru a slot in the receiver and engage a notch in the hammer, preventing the release of the hammer if the trigger was accidently pulled. To reset the safety in the event this took place the bolt would have to be re-cocked! The bolt was a simple straight pull back design with a round knob with a pin attached that that was rotated clockwise after charging a pellet to engage a raised area at the rear to secure the bolt in firing position.

The B-362 that I acquired would not hold a charge and required a complete valve rebuild. When this was done I conducted some preliminary field tests to affirm that it was performing as it should. After determining that all was well in that regard I began setting up the rifle for the best potential accuracy possible. I installed a set of “Ron Robinson Classic Scope Mounts” and a Tasco ¾ inch 3-7x 20 scope, and adjusted the parallax setting out to 20 yards instead of 50.

A word about the Classic scope mounts; they are invaluable for these older Air Guns particularly the older Crosman Air Rifles, and they allow either ¾ inch or 1 inch scope mountings. I have found them to be very dependable and hold zero firmly. The mounts are a two piece clamp on see-thru design that also allows use of the original sights when a ¾ inch scope is used, another plus! They are a real asset for the Air Gun aficionados who want to install scopes on their favorite old Crosman Air rifle/pistol, and they are reasonably priced.

I suppose one could ask why I did not use a 1 inch scope. Well I simply did not want too! In my opinion the ¾ inch diameter looks more period appropriate and flowed better with the diminutive lines of the B-362 and offered maximum accuracy potential within the capabilities of the B-362 rifle, without going to a larger scope diameter, which would look out of place, in my opinion!

Finally I polish the sear surface of the trigger and lube that area with moly- paste and let it go at that, I don’t try to get a match grade trigger pull, just want to make it as smooth as possible. I also beveled and smoothed the square side edges of the trigger and polish for a better feel, with these steps I have been always satisfied with the resultant trigger action.

After completing the steps outlined previously I initiated the velocity test using the H&N HP 12.65grain pellets at the high power setting (2nd cocking position), the test were performed with the muzzle 24 inches from the first screen, a series of 20 shots produced an average 560 fps 8.8 ft. lbs . The first 15 shots averaged 600 fps-10.1 ft. lbs. I use the first 15 shots for hunting and the remaining shots on the CO2 cartridge as plinking rounds. After 25 shots the velocity had dropped to point I would simply discharge the remaining CO2.

The low power setting delivered an average of 533 fps – 8.0 ft. lbs over 25 shots, this setting would deliver 30 shots on a cartridge before the need to change CO2 cartridge and would be useful for fun plinking. (Better shot count but lower energy)

For comparison the Crosman Discovery14.3 grain pellets delivered 546 fps 9.5 ft. lbs over 20 shots on the high power setting, 15 shots delivered 575 fps. 10.5 ft. lbs and by shot 25 had only dropped down to 442 fps this is really pretty good and indicates the valve system was more favorable to the 14.3 grain heaver pellets. I have seen this before in the hammer knock open valve systems and was not surprised. Just my take on it is that the heaver pellets create a little more back pressure and the exhaust valve duration is shorter using less CO2 per shot, I could be wrong!!

No low power tests were conducted with the Discovery 14.3 grain pellets, however I would guess that at the low power setting one might actually get 40 shots meeting the claims made in advertising, I am just not interested enough to find out!!

One note on CO2 cartridges, its been my experience when chronographing these older units its clear that some CO2 cartridges don’t have as full a CO2 content as others, which means shot count can vary per cartridge!!

After field testing I found that the H&N HP 12.65 grain .22 caliber pellets were the most accurate pellet for this B-362 rifle and this is really where I am regardless of total shots per CO2 cartridge!

The accuracy test were conducted at 20 yards from a bench rest and revealed the B-362 capable of very good accuracy, I use card stock paper with ½ inch diameter adhesive dots, three on a target shooting left to right (groups are measured c-c). The first 4 shots went into .500’’ with a fifth shot stretching the group to .760”, the second 5 shot group was .570” the third group was shot using open sights ( remember the scope mounts allowed the use of the regular sights) first 4 shots measured .830” with the 5th shot opening up to 1.20” inches. 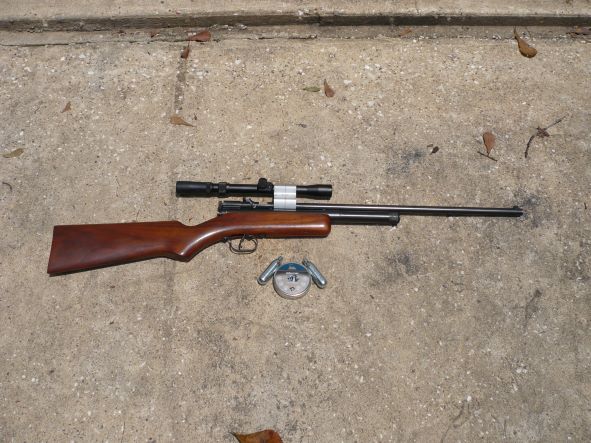 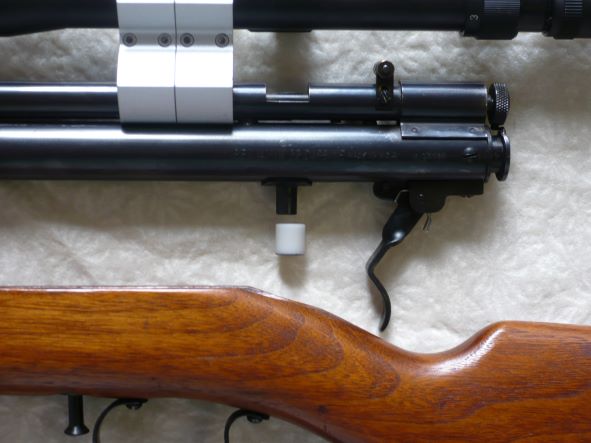 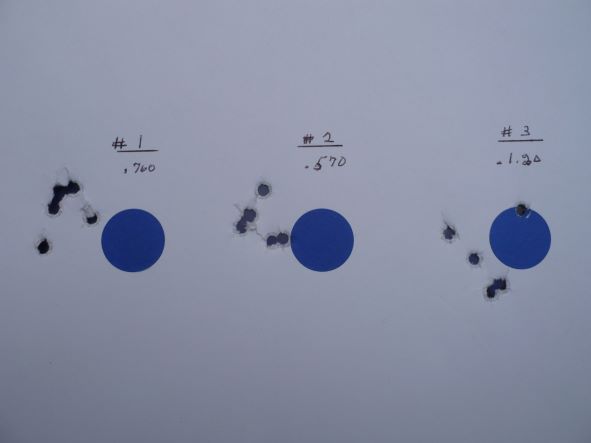