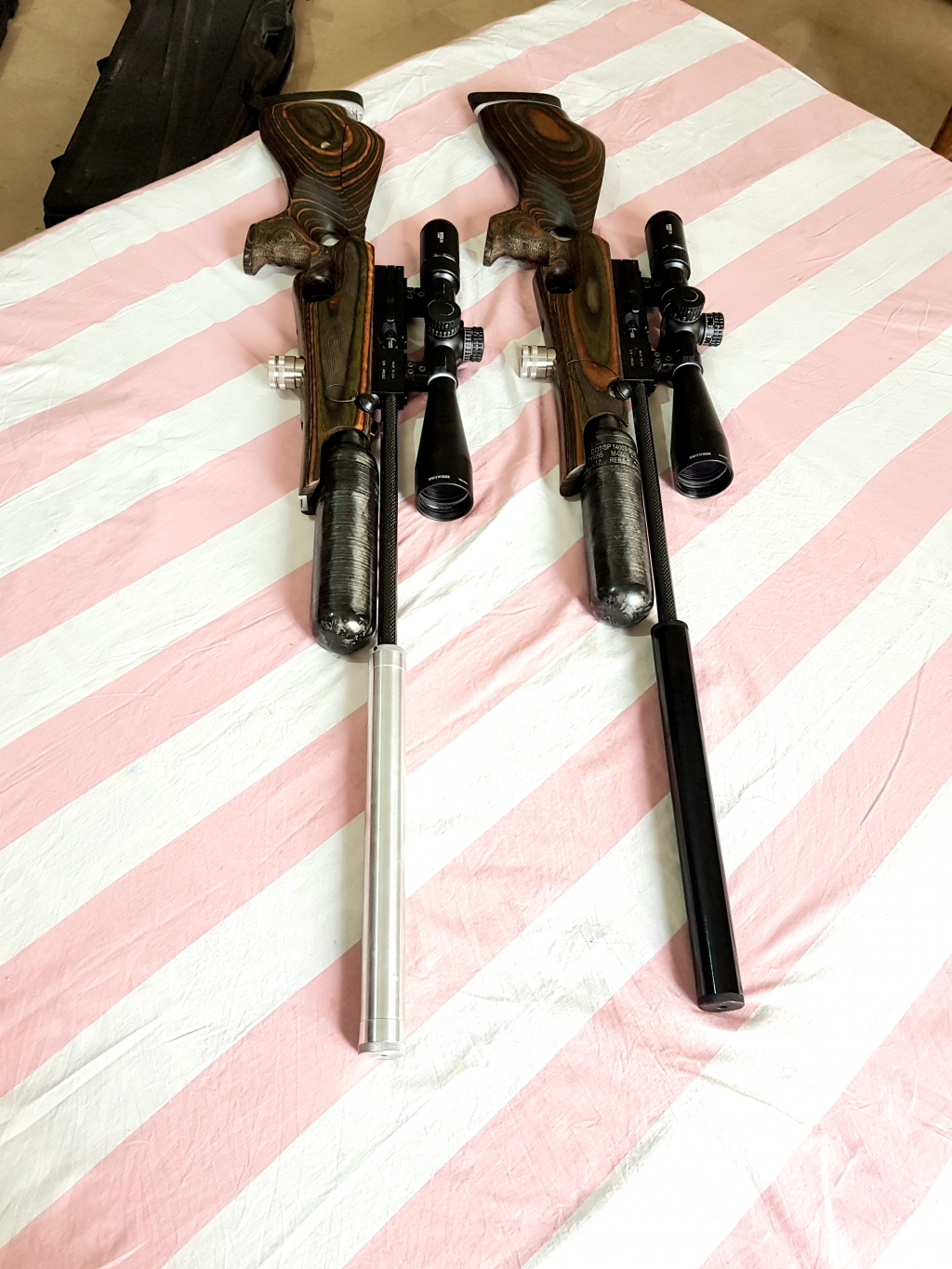 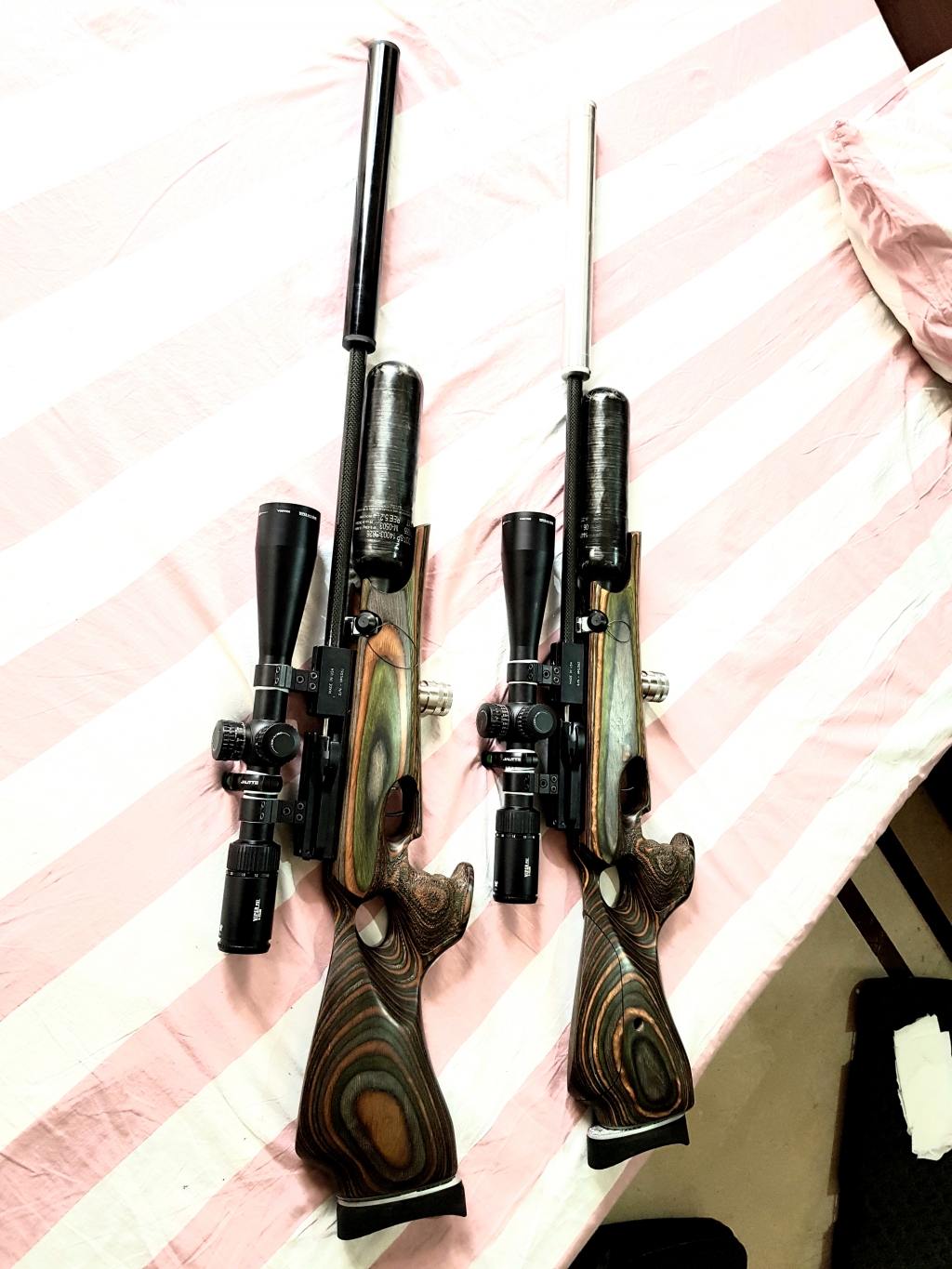 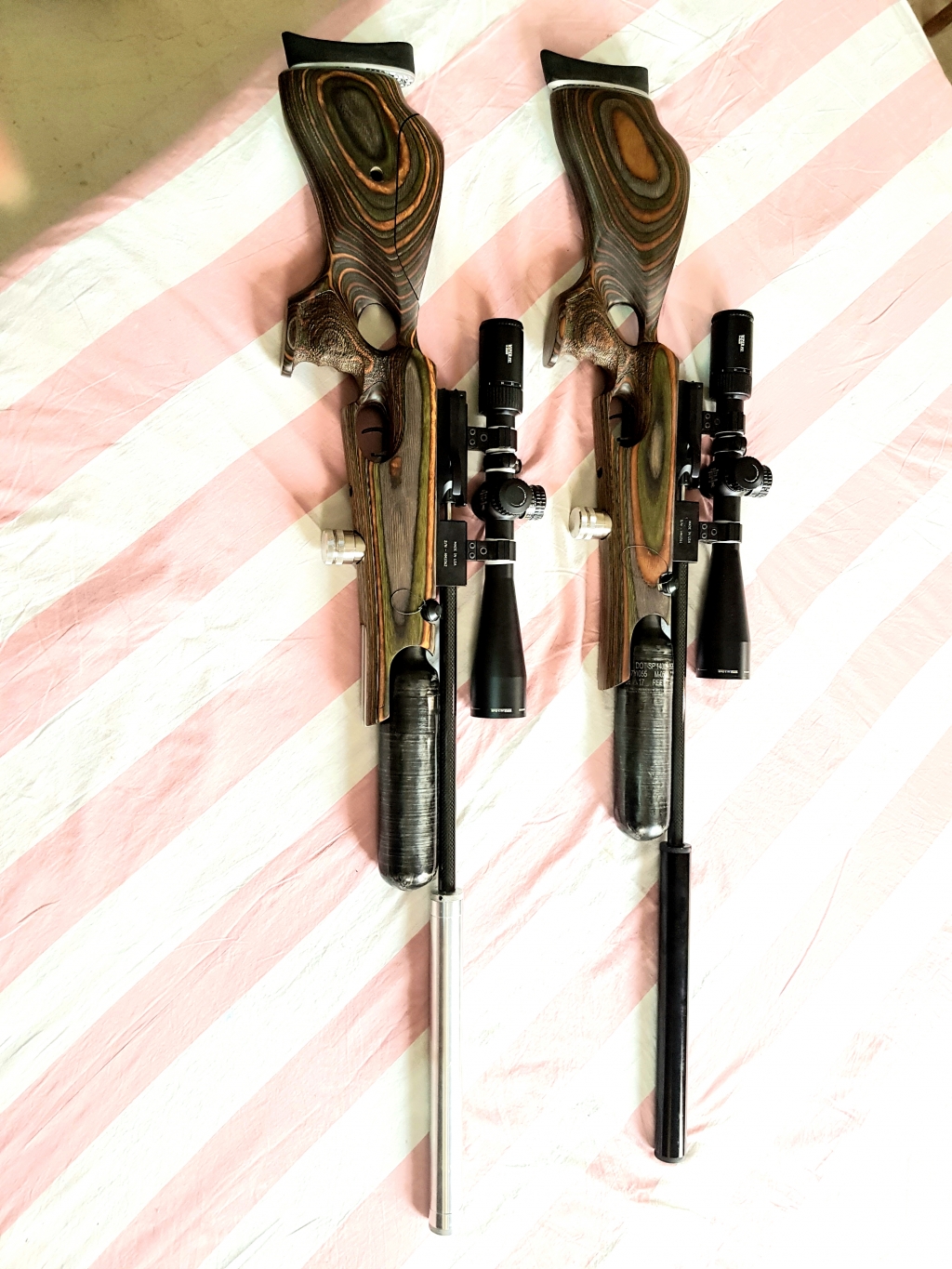 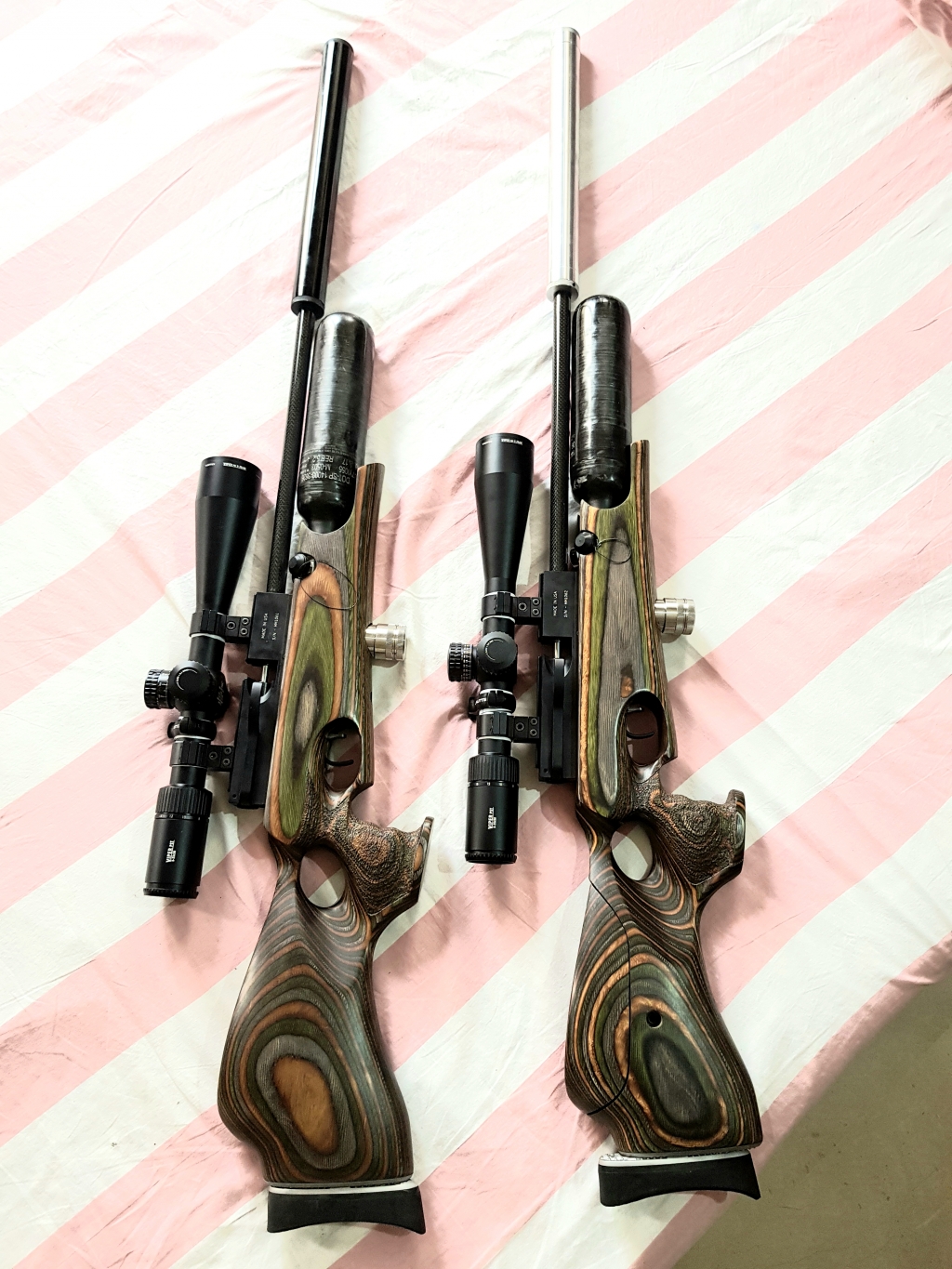 I and my friend Wajih had always admired Theoben Rapid PCPs and their new US based version Rapid Air Weapons (RAW) that was being made by Martin and he was running the RAW Company at that time.

We placed the order for two RAW HM1000X .25 at 60 fpe power level and both with LW polygonal barrels. The order was placed on 05 July 2017. We hardly arranged the funds as it was costing around US$2100 per gun. The exchange rate of my country’s currency with US$ is very much unfavourable for us but as Wajih had plan to visit US after about six months of placing the order, we thought that he can bring both the guns in luggage and we can save funds that otherwise had to be paid to some local dealer for import etc.

MY FRIEND IN NEW YORK

Wajih reached New York in November 2017. There he knew that in NY, airguns are considered to be firearms and for that purpose he had to have a valid fire arms license otherwise serious issues could be faced. Both our guns were custom made as per our requirements and by that time Martin had informed us that he had completed both the guns to our specs and we could make the payment and take delivery.

But now law was prohibiting Wajih to bring the guns in luggage so he finally left the idea of bringing the guns along with him.

We had decided that we will import both guns through some gun dealer. Through the dealer we had to pay around double of the US price due to duties, taxes and the dealer’s margin. But since we had to honour our deal with Martin as these were custom build guns, we paid the bill and took delivery in my country.

Meanwhile we knew that these are two of the last few RAW guns that Martin made before joining hands with Airforce Airguns.

I assume that joining hands with Airforce Airguns will allow for larger number of production units in lesser time but I also am concerned about the quality control under the new set up.

Being a professional accountant I understand that it becomes very difficult to maintain highest level of QC when anything is produced in large quantities. For our two guns, Martin had assured that he will himself test fire both the guns at 100 yards and he will make sure that both guns shoots under 1 inch in good conditions. Later he confirmed this test.

RECEIVED GUNS FROM THE DEALER

Through the gun importer we received both the guns in our country in May 2018. Both the guns looked gorgeous. At least I had never seen that quality of fine laminate furniture on any other gun in my 46 years life. The overall built quality of the guns was amazingly extra ordinary.

Here I tell you that I have been in the hobby of air gunning since my childhood and I also tune guns. I have already worked on, German, British, Swedish and Chinese made PCPs but these RAWs were something like Rolls Royce as compared to Toyota.

The looks, the feel, the cocking, the trigger, the power and accuracy, everything was of the highest quality I had ever experienced. To me the only other guns that come close in terms of some of traits of RAW are HW100 and Theoben Rapid.

Since we were long hungry to test the guns, we put decent scopes on both and after sighting in we waited for a calm day and found that accuracy was under 1 inch at 100 yards with both 25 grain jsb and 34 grain jsb. While 25 grain was going a bit hotter than at 1000 fps and 34 grain jsb was leaving the muzzle at a bit more than 900 fps.

Since I am a tinkerer and having the hobby of tuning PCP guns, I have some links with some of the top US based and UK based tuners. I discussed with them that how the excellent RAW guns may be taken to a new higher level. 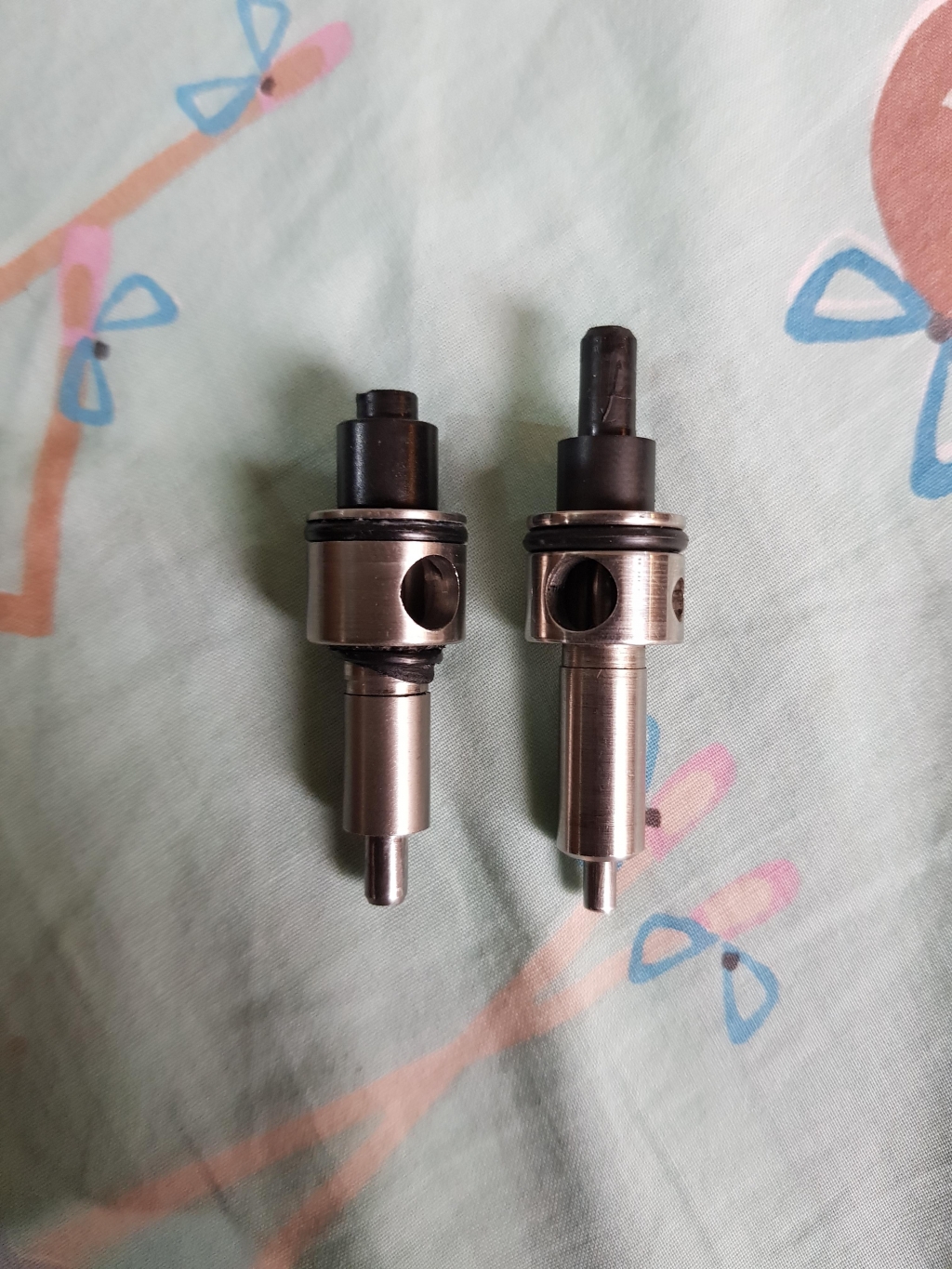 Great work!!. Today I saw in such wind conditions when all of the tops guns safari , impact, edgun were failing to achive such results these two Raw's nailed it!
•••
Upvote 0

Any plans on trying slugs?

Many thanks and I admire your perseverance in acquiring the two RAWS.

Most would have given up at the first attempt of bring them into another country.

I know of very few capital crimes that are committed here in the US and abroad by using airguns.

Making a mountain out of a molehill comes to mind with airgun regulations.
•••
Upvote 0
J

Thanks for the great read. Have always liked Rapids for their simplicity of design, build quality, and, out of the box performance. Am satisfied with the MOA accuracy of my own .25 HM1000 with 34 Gr. MK IIs, but your shared experiences with specially designed modifications is inspirational.

FWIW, Martin still builds each RAW rifle. The only real change is that some sub-assemblies are CNC machined by AF instead of in TN. He is still very concerned with QC as his name is so closely associated with the product. The big change is that Sandra and Martin now have a lifestyle that enables them to explore other pursuits.

Pretty darn cool man. I can definitely appreciate the craftsmanship and beautiful work. They both look great!

Did you ever get the Impact velocity drop figured out?

Have a great day!

Great perseverance in getting both RAW’s into your hands! Also incredible work fabricating the new plenum extensions and probes. You made out of the box great shooters even better! Well done.
•••
Upvote 0

Great fine tuning job. I admired the mastery of all the work done ... especially of the home made plenum.
•••
Upvote 0
H

What are the dimensions of your plenum?
•••
Upvote 0

What are the dimensions of your plenum?
Click to expand...

The internal volume is 25cc and you can make it as per your convenient shape.

Pretty darn cool man. I can definitely appreciate the craftsmanship and beautiful work. They both look great!

Did you ever get the Impact velocity drop figured out?

Have a great day!

There appears to be some hidden issues in PP version of Impact. I don't want to discuss in detail but with PP its very difficult to use multiple calibers in the same gun with ease.

It may be used but with a lot more adjustments than the previous model in which valve spring had been inside the gun and a rubber ball was used to limit the opening of the valve.

Otherwise a lot of people face the same problem.

Looks like I could not restrict myself giving a bit more detail.
•••
Upvote 0

Mubhaur, I actually have had the satisfaction of seeing you work through these details through the last few dozen months. You are obviously very focused, driven and have an eye for detail. As good as the RAWs are from factory, you’ve refined them to way beyond that initial quality.

Superb work my friend! The indexable BSA barrel was my favorite. And by the way, amazing shooting in those blustery conditions.

Mubhaur, I actually have had the satisfaction of seeing you work through these details through the last few dozen months. You are obviously very focused, driven and have an eye for detail. As good as the RAWs are from factory, you’ve refined them to way beyond that initial quality.

Superb work my friend! The indexable BSA barrel was my favorite. And by the way, amazing shooting in those blustery conditions.

Thank you so much zx10wall.

Your appreciation is well received. It is really difficult to do such things while living in a 3rd world country.

Most were saying why to touch a new RAW!!!

I am happy that you are with me all the way through all modifications even being at another part of the world.

Excellent work and writeup Umair! Very good job with understanding and documenting the workings of the gun. I haven't posted in a while, but wanted to say 'hello' and compliment you on a job well done.

Excellent work and writeup Umair! Very good job with understanding and documenting the workings of the gun. I haven't posted in a while, but wanted to say 'hello' and compliment you on a job well done.

I am not used to Anschutz trigger but I have used FWB target triggers. I love those triggers. A great piece of Engineering.

But still the RAW triggers are very good. One of the things which I like about RAW is its trigger.

Some users like such triggers which break like a glass. I prefer no surprise shot. RAW trigger although can be set very light but still no unexpected release of sear. You can feel every fractional movement during the break.

I have also developed in Peek the high performance valve that was initially developed by Bucketboy. I just changed the poppet material from delrin to peek.

Peek has its own benefits but needs much more precision machining. 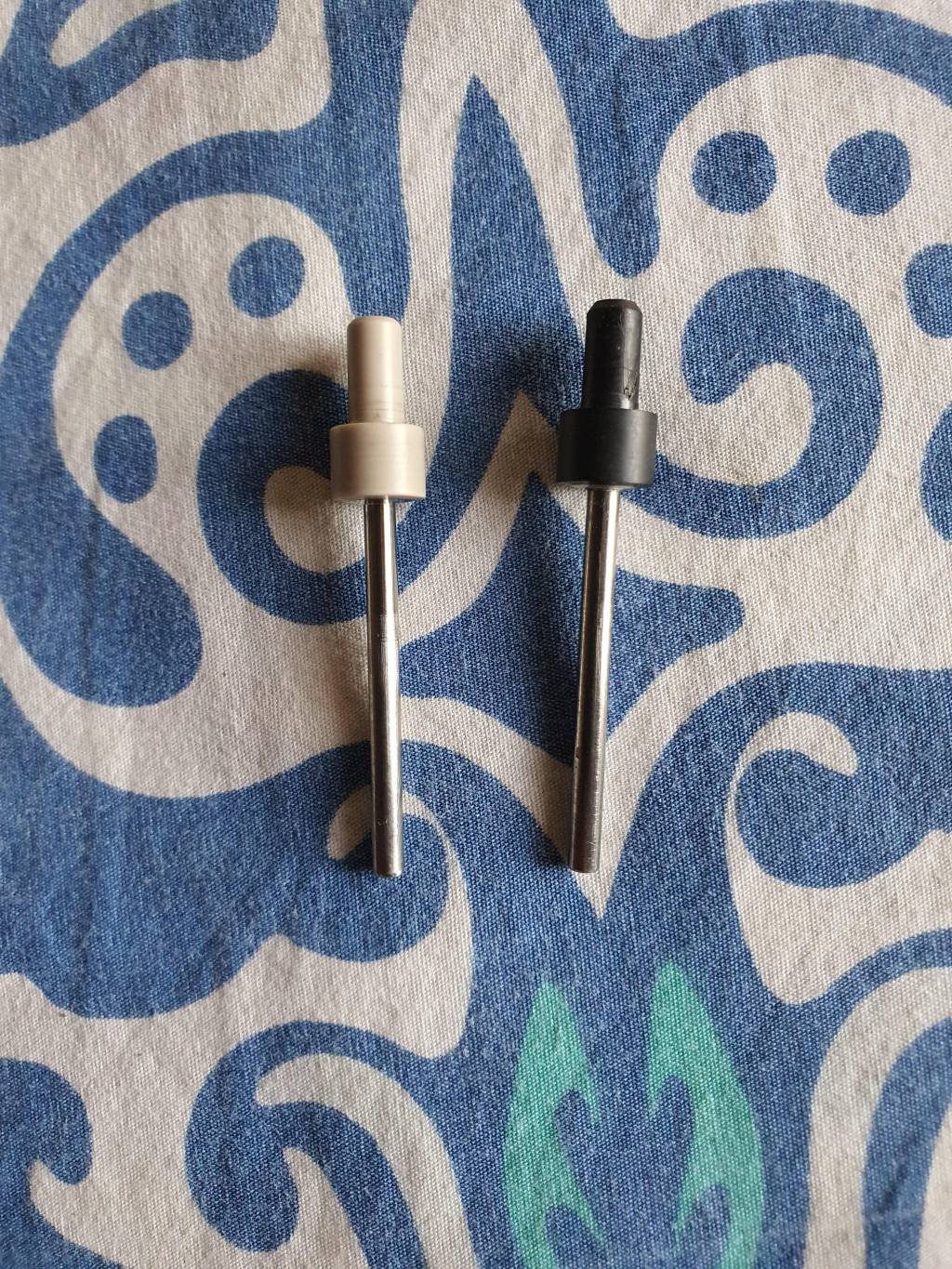 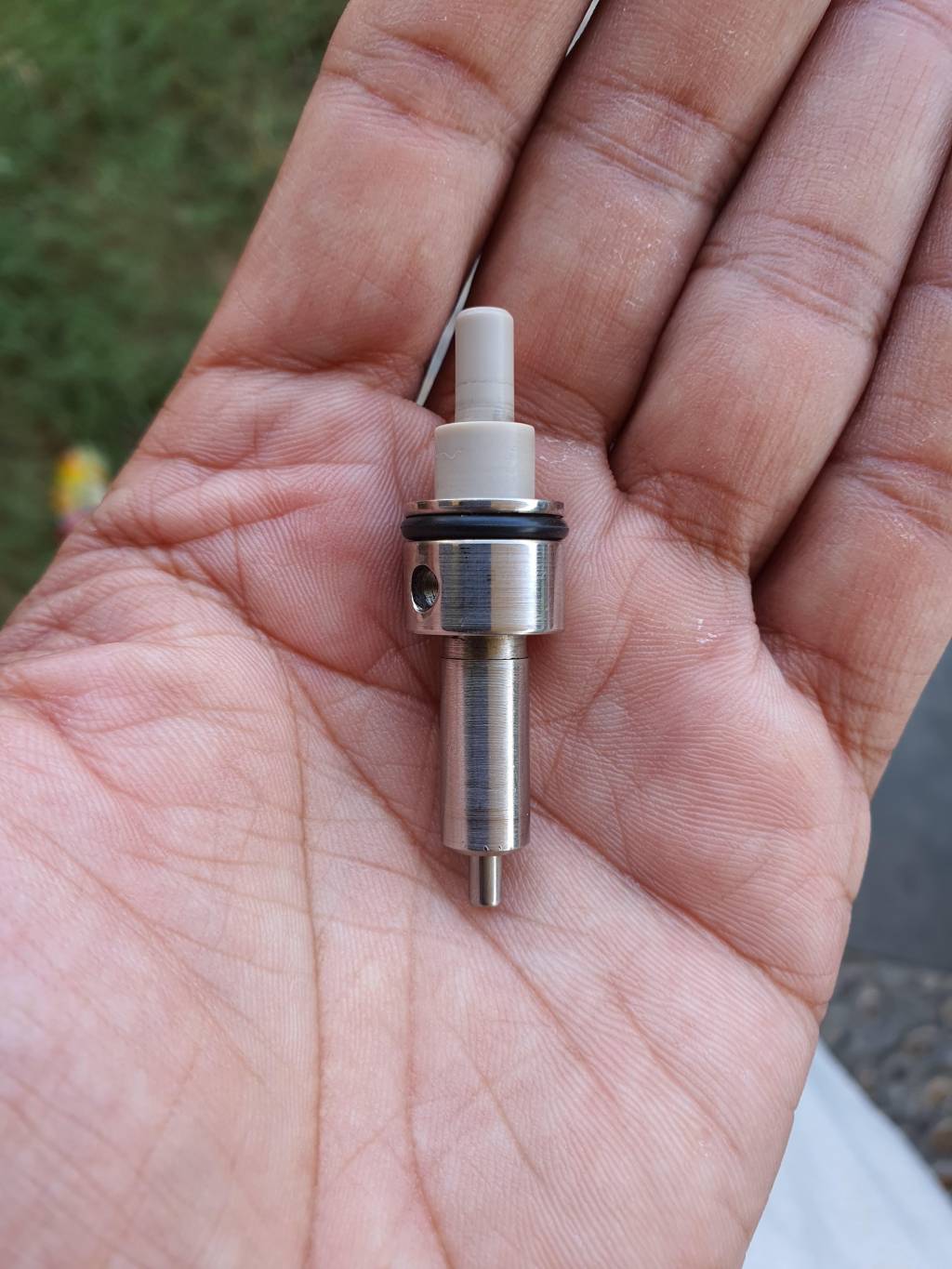 Thank you for the complements.

I am also thinking of putting an adjustable valve spring in RAW. This will be great thing and RAW will have almost all required external adjustments.

This will make it a further outstanding platform.

But this is not my idea. People in UK are doing it for many years.

Surprisingly I see on this forum most such people who think that it's the ultimate gun. Don't touch it.

Well done sir. That is an amazing job in very limited resources supplies and skilled craftsman ship.
Click to expand...