(the photo chart is at the end of this post)

If we believe what’s in the internets..., then “a bullpup is a firearm* with its action and magazine behind the trigger. This creates shorter weapons in comparison to rifles with the same size of gun barrel. This means the advantages of a longer barrel such as muzzle velocity and accuracy are retained while reducing the overall size and weight of the weapon.”

That’s why I like bullpups (and no, you don’t have to like them, as there’s plenty of space in the airguniverse for bullpup haters and bullpup lovers to kill pests, game, target cards, and paint balls in peace and unity).

I want my air rifle to be as short as possible, yet without sacrificing power or shot count when compared to a regular sized rifle. That way I can backpack it, take it vacationing on a plane in a non-oversized suitcase, shoot it unencumbered by confined spaces like my car or a hide, or use concealed carry to avoid needlessly spooking the ever-present paranoid among my city’s 10 million.

So, in my extensive travels across the vast expanse of the internets, I have collected a bunch of them, and their stats, and today I just want to show you a comparison – in looks and in size, in a photo chart. It has helped me see what’s out there, and make a better purchase decision. Maybe it helps you some as well...?!

WHAT YOU GET
A list of 40 bullpups.
With their picture.
Sorted according to their OAL (overall length, in imperial and metric).
I’ll try to add to this list as I feel like it and the weather is good.


SOME BACKGROUND ON THE PICS AND SIZES, AND SOME DISCLAIMERS
● The measurements are for: .22cal | silenced/moderated | bullpups
Note that some .25 offerings are significantly longer (e.g., FX Wildcat).
Sometimes a lower powered version is shorter (e.g., it hurts my heart not to include the Walther Reign**)

● The measurements are for bullpups with shroud or with silencer (“moderator”). For those that want it really short and don’t care about the much louder noise, some manufacturers also offer their bullpups without the shroud (e.g., Hatsan Flashpup, Gamo Furia, Weihrauch HW 100 BP-K, Walther Reign). Of course, with many bullpups you can just remove the shroud and reduce its size.

● I personally like synthetic stocks, and if I can’t get that, at least painted black. So, the pics all have that feature – if I was able to find one.
● The photo chart is sorted – from shortest to longest.
● At the end of this text there is a list sorted according to the brand name.

● All pics are side views. Some pics I had to flip horizontally around to have it point into the same direction as the other guns. Sorry, that way you don’t get to see the side lever....

● The lengths are rounded to the full centimeter.


EXCLUSIONS (Sorry!)
● As I feel the main point of a bullpup is to have a short rifle, I had to draw the line somewhere. I did – at 80cm or around 31".
Anything longer did not make it onto the list. I did include the Huben at 83cm, because it has so many qualities, and they are making full use of the bullpup design not wasting length on a bloated stock. For that same reason I did not include any Brocock as they are half-hearted “semi”-bullpups, much longer than necessary (if their designers just would made up their minds to take full instead of half advantage of the bullpup design!).
The 80cm/31" cutoff means that most of Hatsan’s offerings did not make it onto the list, though I did let the Flashpup squeeze in, as it finally came out in synthetic. But really, Hatsan – to me a BullBoss at 37" (93cm) is just a “regular carbine” with the action behind the trigger – because no regular suitcase, no regular backpack will accommodate it.

● Some manufacturers offer compact, standard, and long versions of the same bullpup (e.g., Taipan, EDgun Matador R5M, Weihrauch HW 100 BP); as long as they were under 31"/ 80cm, they are all listed. Even a semi-bullpup made it into the list because it still is very short.... (Zbroia Kozak Short).

● Sorry, the Evanix Rainstorm 3D Bullpup is with its 27.0" (69cm) quite short, but – in my eyes – it is so unspeakably ugly that it makes my eyes bleed. (Please, don’t take it personal.) Now I don’t have to apologize for leaving out the Benjamin Bulldog – with similarly hemorrhage-inducing aesthetics – because it busts the length limits for this list with its 36".

● I felt the Leshiy with its short 25" / 64cm deserved a space here, since this is a list about short AG, but it’s technically not a bullpup, so for now I left it off.

**● On the Walther Reign (2019)
As great looking and as powerful as it is, but it is not moderated and therefore not feasible in many urban environments – once you calm it down with a 6-inch DonnyFL SUMO or RONIN you hold a 37-inch rifle in your hands, honking 95cm....
Even if we gave up more than half of our muzzle energy, the mid-powered version at 18FPE is still 27" (69cm) loud & long, and adding a TANTO or Hugget Belita we end up with 32" (82cm). Bummer.


Happy drooling, happy clicking that Put-In-Cart button, happy shopping!! Don’t blame me for making you buy more guns than you need, I got my own problems. I’m just trying to be helpful when you chose your next gun.


––––––––––––
*Yeah, Wikipedia discriminating again against airgunners.... bullpups don’t have to be firearms, mind you.


THE LIGHTEST ONES I GOT ON MY LIST ARE THE FOLLOWING

I agree that took some time and I love the post thanks very much.
•••
Upvote 0

Excellent post Sir! I’m looking at The Defiant BSA. I’m looking for anything with a longer than 24” LW.
If I could find a bull pup like EDgun Supermagnum in .22, .25, .257 with 28 -36” barrel I’d bed stock after filling in pores, put WIKA gauge on. Or get custom Vit Kit stock. Excellent post. The new Vulcan Gen 2 with lefty sidelever is a candidate.
•••
Upvote 0
T

I didn't realize how small a Lelya is until recently, when I saw a photo of one next to a Leshiy. One of these days, I hope to have one.

Thanks for posting, Matthias!
•••
Upvote 0

Thanks for taking the time to do this.. it's a great way to compare them.
•••
Upvote 0

Great post. I was wondering why you didn’t include the Leshiy? Or isn’t it considered a bull pup?
•••
Upvote 0
G

Great post. I was wondering why you didn’t include the Leshiy? Or isn’t it considered a bull pup?
Click to expand...

This is pretty awesome - thanks for sharing.
•••
Upvote 0
G

They are all pretty ugly, but for some reason this is the way I need to go. They seem like they are “ stronger” built then the better looking” std. rifles”. Which look like they have barrels that would bend in a stiff breeze. The Edgun R5M still interests me the most, probably laminated stock, as i don’t think I would end up on the winning side of the walnut lottery, but he’s out of them until, who knows when. Very cool to see them all together, instead of jumping from web sight to web sight to try and compare. Which I do every day, now I can look here to see what my second choice may be, thanks.
•••
Upvote 0

that is great,helps ,to see the side levers,Thanks.
•••
Upvote 0
T

Nice list. There is one thing to keep in mind though, and that is that some of them have sound moderation integrated, while other have not. I believe most owners of a air rifle would add a moderater to it. For example the fx wildcat on the picture is loud without a supressor, so it will not be unlikely it will be 10cm or more longer with a moderator on it. The bobcat (and wildcat mk1?) on the other hand has a longer shroud which dampens it, so a wildcat mk2 with a added moderator will be close to a bobcat in lenght. It is hard to see from the pictures which guns have shrouds which stops on the end of the barrels and which doeas not. The egduns seems to have sound moderation built in. so they might actually be "true" to theire lenght if not added moderator is nescesarry.
•••
Upvote 0
S

Thank you for putting this together. I'm a newb to PCP and have never handled much less shot a bullpup. But my interest in PCP is due to the combination of compact, quiet and accurate hunting/pesting rifles so naturally bullpups intrigue me. But there is something that confuses me.

If you look at the Lelya 2.0 you see that the butt stock curves underneath towards the breech.

The Skyhawk, on the other hand, appears to have a fair amount of stock hanging off the back of the rifle. So I have a couple of newb questions:

1) Is there some advantage of shooting position comfort to have this much stock hanging off the back? There isn't enough room to have a cheek rest and a lower scope position like a Cricket Mini Carbine so me it's just unnecessary length on what is supposed to be compact rifle configuration.

2) Is it to maintain a decent length of pull and avoid a longer trigger linkage?
•••
Upvote 0
N

Thanks for putting this together- it’s extremely helpful. Kudos

If you ever do a V2 of this, it would be nice to also see weights. With bullpups, I always envision their handling by comparing torque (not sure if this the the correct term? Length times weight...

Come to think of it, it would be nice if manufacturers told us at what length the center of mass was located.
•••
Upvote 0

Thank you for putting this together. I'm a newb to PCP and have never handled much less shot a bullpup. But my interest in PCP is due to the combination of compact, quiet and accurate hunting/pesting rifles so naturally bullpups intrigue me. But there is something that confuses me.

If you look at the Lelya 2.0 you see that the butt stock curves underneath towards the breech.

The Skyhawk, on the other hand, appears to have a fair amount of stock hanging off the back of the rifle. So I have a couple of newb questions:

1) Is there some advantage of shooting position comfort to have this much stock hanging off the back? There isn't enough room to have a cheek rest and a lower scope position like a Cricket Mini Carbine so me it's just unnecessary length on what is supposed to be compact rifle configuration.

2) Is it to maintain a decent length of pull and avoid a longer trigger linkage?
Click to expand... 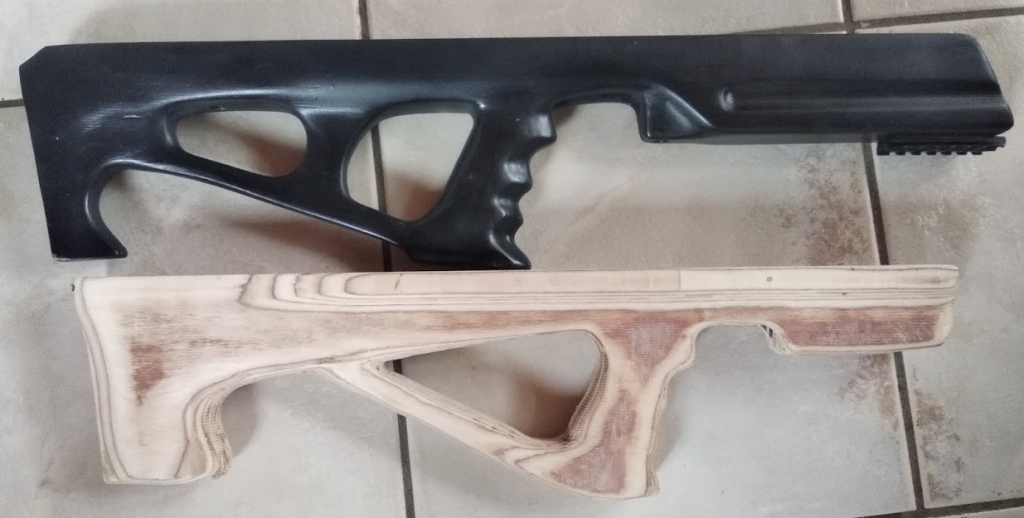 These are 2 handmade stocks for Artemis P15, as you can see at the bottom i made it with 8cm moved front the trigger, so now i have better handling and the gun is shorter
•••
Upvote 0

Very good post and tons of info. I jumped on the bp band wagon when the cricket compact hit the street. Ernest Rowe set it up to shoot js b 18.1 @ 860 for 30 fpe. The starlings still trying to get it banned. Stupid accurate. The only gun in my collection that will hang with it is the az rapid mk 'll .20 then the cricket has to bow. Not by much. Love them both.
•••
Upvote 0
M